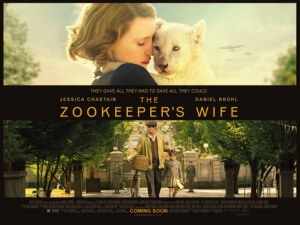 BASICALLY…: As Poland is swiftly taken over by the Nazis, the owners of the Warsaw Zoo – Jan Żabiński (Heldenbergh) and his wife Antonia (Chastain) – use the remains of their compound to shelter Jews from annihilation…

There’s no denying the bravery some people showed as an act of defiance against Nazi regimes during the Second World War, but sometimes the movies that are based on their courageous and life-saving acts are less than noble in their executions, no matter how well-intentioned. Films like Valkyrie, Defiance, and now The Zookeeper’s Wife fall into this particular category, which certainly have a lot on their mind when it comes to showing this kind of real-life bravery on the big screen, but ultimately fall short of delivering their emotional impact to audiences.

In the case of The Zookeeper’s Wife, it’s unfortunate because it is a fascinating story; Antonia Żabińska (Jessica Chastain) and her husband Jan Żabiński (Johan Heldenbergh), the owners of the Warsaw Zoo, are helpless overseers to the Nazi invasion of Poland and their placement of Jews into the Warsaw Ghetto, and resolve to rescue and hide small amounts of Jewish prisoners in what is left of their compound, all under the eyes of Nazi enforcers like Nazi zoologist Lutz Heck (Daniel Brühl). Theirs is a story of true heroism, but director Niki Caro’s film is too unmemorable and somewhat lacking in real dramatic stakes to leave much of an impact, surely a detriment to the fascinating real-life story it was based on, as well as the true figures involved.

Case in point, the opening few scenes are so drenched in sugary sweetness it’s almost like a Disney production (fitting, seeing Caro is currently in development with a live-action version of Disney’s Mulan), but then once the bombs start dropping and both humans and animals start dying, it takes a decisively darker tone, which does not let up with serious implications of torture, rape and execution. Usually, a film like this can make that sudden U-turn in tone and work out just fine, but when you start your movie with something that feels so unnaturally family-friendly, it’s quite the alteration to adjust to. You could show your child this opening just fine, but once the Nazis enter the picture it’s likely their young minds will be quite disturbed; likewise, an adult could easily scoff at the sugary opening but then find themselves taken aback by the slightly more mature tone it sets for the rest of the film. Tonally, it’s a mixed bag, and it doesn’t work well enough to tell the story the way that it honestly should be told.

While the production values are decent – the set designs are nice and period-appropriate, with some fine cinematography – Caro also struggles with picking a strong focal point for this story. For a film called The Zookeeper’s Wife, Chastain’s character feels almost like a supporting player for most of it, with Heldenbergh often out doing more of the work than she is, whether it be hiding Jewish prisoners in his van or liaising with Nazi officials to enter the Ghetto as a cover for his real intentions, while she mostly stays behind giving support to the refugees and being the sort of whimsical soul Chastain can play in her sleep (she is good in this, but her given material isn’t exactly playing to her strengths). Despite that, neither of them feel like developed characters and don’t have the right amount of charisma to fully carry the film, leaving them often stranded without much to do except whatever is required of them to be done from the script. The most developed person out of everyone is Brühl, as you really get to see and feel his character’s development from a well-intentioned zoologist to a creeping psychopath with something of a God complex, as he’s been assigned to bring back mythical creatures through experimental breeding. It’s odd when a Nazi character is the most rounded and intriguing character in a film where the heroes are meant to be these other people.

Again, you can’t deny that this film had noble intentions, as do many films like this that want to dramatize a real-life act of wartime heroism, but like a good majority of them The Zookeeper’s Wife has one too many flaws in its screenplay, directorial choices et al to really work as much as it wants to. As far as sugary Hollywood depictions of WW2 Europe go, it’s not as overwhelmingly diabetic as The Book Thief, but it should definitely go easy on its sugar intake, for its own sake.

The Zookeeper’s Wife eagerly wants to tell this real-life tale of wartime heroism on the big screen, but thanks to some heavy flaws in its tone-deaf screenplay and overly-sappy direction, it never manages to be as captivating or even as interesting as it really should be.