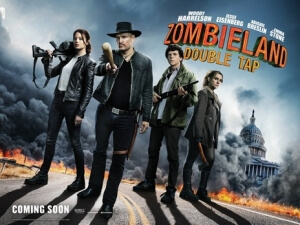 In the ten years since we last toured Zombieland, there have been – needless to say – quite a number of things happening in the lives of the original film’s cast and crew; stars Jesse Eisenberg, Woody Harrelson and Emma Stone have gone on to have strong careers and several Oscar nominations between them (with Stone being the sole winner for La La Land), director Ruben Fleischer finding further commercial success with last year’s Venom, and writers Rhett Reese and Paul Wernick pouring their snarky sense of humour into not one but two Deadpool movies. Even the Zombieland concept itself was briefly adapted into a TV pilot, for a series that ultimately never made it to air.

With all of these people going on to have bright and prosperous careers, you’d think that returning to a post-apocalyptic world overrun by zombies would be the last thing on their minds. Not so, as it turns out, because going by Zombieland: Double Tap there is clearly a lot of life and love still to give in a rare belated comedy sequel that actually doesn’t suck.

The film drops us right back into the same crazy post-apocalyptic world that we saw before, with makeshift family Tallahassee (Harrelson), Colombus (Eisenberg), Wichita (Stone) and Little Rock (Abigail Breslin) still making their way across a desolate America, finding a place to call home where they can’t be bothered by the undead. At first, they seem to have hit the jackpot when they find refuge in an abandoned White House, but when Little Rock – now a teenager and wanting to be around people her own age – suddenly takes off with hippie stoner Berkeley (Avan Jogia), the three remaining family members head out into the zombie-infiltrated wilderness to find her, along with new addition Madison (Zoey Deutch), an airhead who survived most of the zombie carnage by hiding in a mall freezer.

The case with a lot of comedy sequels that come a number of years after the original – examples range from Zoolander 2, Hot Tub Time Machine 2, Bad Santa 2 and so on – is that they usually come with a begrudging and cynical attitude, as though the filmmakers and cast members were contractually obligated to return instead of having any real drive to tell more stories in these worlds with these characters. In the case of Zombieland: Double Tap, that doesn’t seem to be the case; even if the people involved are sleepwalking though it, you really can’t tell because the writing, direction and certainly the acting feels just as lively as it did ten years ago, and certainly with a strong passion for comedy as well as a good sense of fun. The lead quartet easily slip back into their characters and their undeniable chemistry with each other, particularly Woody Harrelson who’s having an absolute blast walking around again in Tallahassee’s shoes, Reese and Wernick’s script is full of wit and charm, and Fleischler’s direction is far tighter and more impressive than anything he did in Venom. It definitely feels like a sequel made by the same people that did the first movie, and they are people that clearly still adore this universe and its inhabitants, and have done everything in their power to make their big-screen return just as funny and entertaining as before.

There are a lot of laughs to be had here, from a hilarious running gag about Tallahassee’s bad-ass vehicle of choice, to the several clever ways in which Colombus’ “rules” are implemented into the scene via tightly edited text, but occasionally there is a gag that doesn’t always land as gently as the movie would probably have liked it to. There is, for example, an extended gag involving two characters that look and act a little like Harrelson and Eisenberg’s characters, which goes on for a little longer than it should, and it feels like the whole movie stops dead so that it can just do this one joke which, while funny, does get stale after a little while. The film also repeats a number of jokes that worked in the first film, such as occasionally cutting away to small vignettes of elaborate zombie kills that earn them the title of “Zombie Kill of the Year”, a few lines of dialogue that were popular utterances, and most notably a mid-credit sequence featuring a particular stand-out from that first movie (which, incidentally, is a lot funnier and more entertaining than the other zombie comedy they appeared in earlier this year, The Dead Don’t Die); some of them work more than others, but the ones that don’t just make you want to watch the first movie instead, when those jokes were fresh and not quite as forced as some of them are here.

Even though it doesn’t hit the comedic mark as much as the first one did, this is still a rare comedy sequel that is actually fun to watch, and funny enough on its own terms to not feel like a cynical cash-in. There is genuine passion that has been put into this film, from the acting to the writing to the direction, and these are still a likeable bunch of characters that you enjoy spending time watching as they’re bonding as a family or killing hordes of zombies (either way, though, there is violence). For what it’s worth, this was a nice return to an entertaining world where the dead run rampant, nobody is safe, and Woody Harrelson struts around wearing Elvis Presley’s wardrobe; in other words, it’s one hell of an apocalypse to run around in.

Zombieland: Double Tap is a rare comedy sequel that is entertaining and funny enough to stand well on its own next to its predecessor, and while it perhaps doesn’t score as many laughs as the original it still serves as a fun return to a world filled with the same likeable characters we were first introduced to, and a lot of the fun comes from how the cast, writers and director clearly love this world and its inhabitants, and don’t appear to be sleepwalking through what could have so easily been an easy cash-grab for all of them.

Want to decide what the movie’s like for yourself?
Check out Zombieland: Double Tap showtimes in London
via