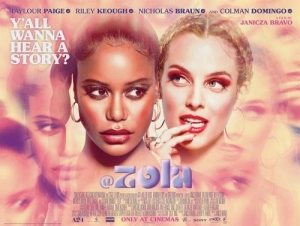 BASICALLY…: A stripper (Paige) embarks on a wild road trip to Florida with her new sex worker friend (Keough)…

It’s a sign of the times that we are now getting movies that are based on Twitter threads, but Zola – based on the infamous, 148-tweet long story by Aziah “Zola” King – deserves a little more credit than just simply being “that movie based on a bunch of tweets”.

Director and co-writer Janicza Bravo’s vision of the wild and crazy experiences described by King on the social media platform is just as vivid and equally as bonkers, although there is a playful attitude to its filmmaking that livens some of the darker and somewhat sinister aspects of its storytelling. It will definitely not be everyone’s cup of tea, but those who are interested will get something out of it, even if that something is a formidable, if hollow, story brought to life.

The film introduces us to Zola (played by Taylour Paige), a waitress and part-time dancer in Detroit, as she meets a pretty but also pretty trashy fellow stripper named Stefani (Riley Keough) at the restaurant where she works. The two quickly hit it off, and it’s not long before Stefani invites Zola on a trip to Tampa, Florida, where she claims the two of them can make significant money dancing at a local strip club. Soon after Zola hits the road with Stefani, her insecure boyfriend Derrek (Nicholas Braun), and her mysterious “roommate” known as X (Colman Domingo), things get crazier by the minute; Zola learns that X is really Stefani’s pimp, and has arranged for both ladies to serve as escorts to earn him money, something that Stefani is far too accepting of as opposed to Zola’s complete bewilderment. The weekend eventually tailspins into a series of unfortunate events, from aggressive clients to a shooting to an attempted suicide, all of which was serialised by the real-life Zola in her now world-famous Twitter postings.

“Most of what follows is true,” the opening text states, and it’s to the credit of the writers that you’re never entirely sure which parts of the story are amped up for dramatic effect, because it’s all so frighteningly plausible. Bravo and her co-writer Jeremy O. Harris tell the story in a straightforward manner, but hone in on specific details that highlight the absolute messiness of the situation while also presenting it as a somewhat opportunistic moment for its characters; upon finding out that her new friend is selling her body for as little as $150 by the hour, Zola takes matters into her own hands by making a new ad for Stefani and significantly inflating the price, getting more clients and thus more money in the process. Even though what she’s going through is undoubtedly rough and dominated by some toxic figures – Colman Domingo’s fiery pimp is a particularly menacing one – the film makes it clear that the titular character is at the very least making the most of a bad situation, which regardless of it happening in real life or not does display the kind of resilience and bold-headedness that comes across in her tweets.

As a director, Bravo lends a very playful eye to her film’s overall visual style, blanketing it with a grainy 35mm coat and editing scenes to sync up with characters’ phone activity (when people take pictures, the picture cuts in and out of black to replicate the rapid-fire speed of a typical smartphone camera). Characters will verbalise their own texts instead of typing them out, and occasionally they will break the fourth wall to remind the viewer of the deceitful nature of others, or even offer their own questionable perspectives; at one point, Stefani herself attempts to portray herself to the audience as a well-mannered Christian girl roped into corruption by a stereotypically ghetto version of Zola. Elsewhere, composer Mica Levi provides an imaginative and heavily experimental musical score made up of synthesisers and familiar phone sound effects such as the birdsong of Twitter and the swooshing of a sent text, in one of the more unique film scores to be implemented so far this year.

While it is very well-made, well-acted (everyone pretty much nails their larger-than-life personas, particularly Riley Keough who really embraces her character’s trashiness and borderline offensive “blaccent”) and certainly fearless in its depiction of some very dark aspects of this story, Zola can’t help but feel about as bare-thin as a regular tweet. It doesn’t have a whole lot to say other than telling the story it’s based on, and while there are moments in the movie that are rather shocking to witness, it never crosses into absolute insanity or anything truly sensational. It mostly seems to exist just to give the real Zola’s thread a visual platform to tell its story on, and to also give Janicza Bravo some clout as a stylish filmmaker to watch, but outside of that the film is left to twiddle its thumbs and serve as a slightly hollow shell for an interesting online story to be dramatized.

Zola is now showing in cinemas nationwide – click here to find a screening near you!