Zack Snyder’s Justice League (Review) – A League Of Its Own 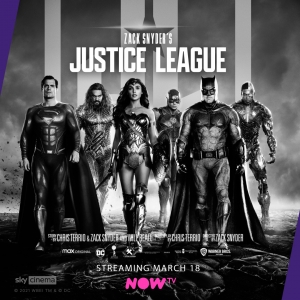 Director’s cuts have, quite frankly, never been anticipated as much as Zack Snyder’s Justice League has. No matter what the end result is like, you have to understand that it is simply unprecedented how millions of fans around the world have come together online to lobby for a filmmaker’s pure vision for a film following a disappointing, studio-backed theatrical cut. Ridley Scott’s multiple versions of Blade Runner never got this much hype, nor even Peter Jackson’s extended cuts of Lord of the Rings; this is a director’s cut that exists purely because of a frivolous internet campaign led by passionate fans of Zack Snyder’s vision for the DC Extended Universe, and regardless of the mixed reception films like Man of Steel and Batman v Superman: Dawn of Justice got, it’s impossible not to admire the sheer dedication that people have for this singular perspective.

You all know the story by now, but just in case you don’t: Snyder left production of the original Justice League in the wake of his daughter’s tragic suicide – this cut contains a dedication to her at the very end – and was replaced by Joss Whedon, who proceeded to reshoot much of the film in order to meet Warner Bros’ strict mandates after the critical disappointments of Snyder’s first two DC movies. The resulting theatrical cut was heavily divisive amongst critics and audiences, as well as a commercial disappointment, although everyone could agree that whatever they made of it (I personally found it to be something of a guilty pleasure), there could have been something if Snyder had been allowed to just make the movie he wanted to make. Three-and-a-bit years later, he finally did, thanks to a prominent fan campaign calling for Warner Bros to create a “Snyder Cut” of Justice League, prompting the studio to shell out an extra $70 million so that Snyder could reshape and even reshoot parts to the film to match his overall vision.

So, the real question now is, after all the hype, and after years of demanding such a thing to exist, is Zack Snyder’s Justice League actually worth it? To my surprise, and perhaps the shock of most others, it actually is.

Not only is Zack Snyder’s Justice League a far stronger, more focused and overall better version than the theatrical cut, it is a true superhero epic in every sense of the phrase. Everything you could possibly want out of a Justice League movie, as directed by the guy who also made 300, Watchmen and of all things Sucker Punch, is contained in this giant, four-hour odyssey that might well be the filmmaker’s most accomplished project of his career, and for both fans of his vision as well as those more sceptical, it’s hard to deny that it is a very impressive piece of work.

As it was in the theatrical cut, the plot kicks in shortly after Clark Kent’s (Henry Cavill) noble sacrifice at the end of Batman v Superman: Dawn of Justice. Bruce Wayne (Ben Affleck) has since dedicated himself to gathering a group of metahumans who can protect the planet in the Kryptonian’s absence, and so far he’s managed to win over Diana Prince/Wonder Woman (Gal Gadot), Arthur Curry/Aquaman (Jason Momoa), Barry Allen/The Flash (Ezra Miller) and Victor Stone/Cyborg (Ray Fisher). Their assembly must come quick, for the powerful Steppenwolf (Ciarán Hinds) – a servant for the tyrannical Darkseid (Ray Porter) – has arrived on Earth to gather the three “Mother Boxes” which, if united and synchronised, could cause worldwide devastation. Our heroes must now work together in order to not only defeat Steppenwolf, but bring back hope and optimism to a torn world post-Superman.

It is, of course, a different kind of superhero epic than any of the biggest Marvel movies out there, for whereas they had twenty-plus movies to develop character and backstory before bringing out the big guns with Avengers: Endgame, this movie has much less time to develop its connectivity, getting the vast majority of character growth and universe-building out of the way in this one, extremely long movie. However, Zack Snyder’s Justice League uses its monster-sized running time accordingly to set up enough dimensions for its characters for them to resonate far greater than not just the theatrical cut but both Snyder’s Man of Steel and Batman v Superman combined. Of the main heroes, it is Ray Fisher’s Cyborg who gets the biggest upgrade in terms of character expansion, as he was largely side-lined during most of the Joss Whedon version (no wonder, then, why the actor’s been so vocal about Whedon’s alleged misconduct on-set for the reshoots) but here is very much the heart and soul of the movie, with much of Fisher’s emotional performance restored to allow a greater sense of empathy for the previously-undeveloped character. Even the film’s villain Steppenwolf, who was a major point of criticism in the theatrical cut for his bland, one-dimensional characterisation as well as his even blander CGI look, gets a few more dimensions to his character, and also a much slicker design complete with spiky body armour. Existing heroes from Gal Gadot’s Wonder Woman to Ben Affleck’s Batman are also given fine moments to shine, without betraying the development they have received in previous DC movies or, like in Whedon’s mandated lighter version, suddenly spout some out-of-character one-liners (or, in the case of Ezra Miller’s Barry Allen, spouting way too many of them; he’s much more dialled down here).

The action sequences carry far greater weight to them here, because not only is the plot far more consistent and allowing reason as to why they’re happening in the first place, but Snyder’s style lends for some rather spectacular visuals which are among some of the director’s most ambitious shots to date. Framed entirely in a 1.37:1 aspect ratio, and set to a bombastic new score by Tom Holkenborg, the movie overcomes its inevitable oversaturation of CGI (some of it better than before, other bits not so much) with a proud display of grand and highly ambitious set-pieces that strongly emphasise the heroes’ different abilities and give each one of them their moment of glory. Some of it can be breath-taking to watch, and as someone who wasn’t even that big a fan of either Man of Steel or Batman v Superman, I was honestly shocked by how well these appeared to have been made and executed, all by a filmmaker who clearly took on board a lot of the constructive criticism from those films during this one’s original production and beyond.

It’s not exactly an A+ or A-grade movie, because there are some parts where you can definitely feel the four-hour running time, and some of the soundtrack choices are a little off (a lot of Nick Cave numbers in scenes where they really don’t fit), but for the most part this is a very impressive project that’s honestly better than I thought it would be. I was never one of the horde that lobbied hard for the Snyder Cut to become a reality, but even then I was still curious about how it would turn out, because I still wanted to see what Zack Snyder’s ultimate vision of this very disjointed superhero team-up would have been. Having now finally seen Zack Snyder’s Justice League with the rest of the world, it’s a fitting completion of this director’s long journey to realising his vision, and well worth the lobbying.

Zack Snyder’s Justice League is not only a major improvement on the divisive Joss Whedon-overseen theatrical cut, but is also an impressively crafted, if overlong, superhero epic in its own right, spending far greater time on character and plot consistency than either of Snyder’s previous DC movies combined, and crafting some visually spectacular action sequences that rank among the most stylish and ambitious in the director’s entire filmography to date. In short, the Snyder Cut was well worth the wait.