You Were Never Really Here (Review)

You Were Never Really Here (Review) 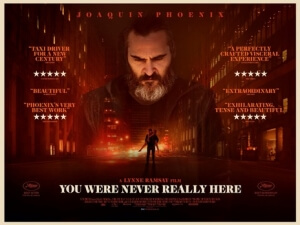 BASICALLY…: A traumatised veteran (Phoenix), now making his living tracking down missing girls, is assigned to rescue the daughter of a politician from a brothel…

With only a few films under her belt, Glaswegian director Lynne Ramsay has already gained a following for what many have considered to be a daring and provocative talent within her feisty spirit. Her films thus far have featured very disturbing material executed in just as uncomfortable a fashion, yet she always manages to find the bittersweet beauty in the underlying horror with strong complex characters, chilling editing and invasive cinematography.

Until now, perhaps the film that gave her work the most attention was We Need To Talk About Kevin, which was an excellent alternative horror film that dove into the messed-up psychology of a young mass murderer, and the mother who through her own failings as a mother caused him to become the monster he would later be known as. Similar themes can also be found in her latest film You Were Never Really Here, in that it explores the complicated and permanently damaged psyche of a man with severe trauma issues willing putting himself in danger in order to do the right thing. Because of how intense and even scary some of the scenes can get, it can also technically be labelled as a horror film, which serves in the film’s favour because it appears that Ramsay has made a film that’s as frightening as it is unbearably thrilling, and will stay with you long after the credits start rolling.

Joaquin Phoenix stars as Joe, a former soldier who lives a quiet life with his elderly mother (Judith Roberts), and makes a living by going in and rescuing abducted young girls from being trafficked. He is given a new assignment which seems fairly straightforward – Nina (Ekaterina Samsonov), the young daughter of a politician (Alex Manette), has been taken and forced to work in a New York brothel, and needs saving from her predicament – but when Joe violently makes his way in and reclaims Nina, he soon finds that he has wandered in to a much larger conspiracy that involves corrupt cops and paedophile politicians, and must do what he can to survive the onslaught caused by his actions.

Right from the very start, which features some very disorientating close-up shots of the various items Phoenix’s Joe has used to complete a mission in Cincinnati, you’re suddenly drawn into this very unnerving world that Joe operates in, one that’s as violent as it is repellent. However, Ramsay does an interesting thing with the violence in this film, in that she never actually shows violent things happening to people, and covers all of that up with camera angles and fast-cut editing to give the impression that something bloody has gone down without ever really showing it go down. One sequence, which sees Joe storming into the brothel armed with nothing more than a hammer and taking out the security as well as the naked patrons who are in their rooms with young girls, is shown almost entirely through CCTV camera footage, with the walls providing a barrier between us, the audience, and whatever way Joe is killing people with, again, just a hammer. Although the odour of blood and death is all over this film – in more extreme cases than one; seriously, it gets brutal in a few scenes – Ramsay avoids showing us the precise details of how these people die in such horrible fashions, preventing it from becoming a gratuitous and overbearing circus of violence when the very idea of children being forced into sex is sickening enough as it is.

The fact that Ramsay avoids showing the violence on-screen is also a clever way of repositioning the focus of the film on its main character, and the haunting performance that Joaquin Phoenix gives as this seriously damaged individual. Throughout the film, once again thanks to the positively chilling editing, we see flashbacks of Joe’s abusive childhood, as well as a particularly disturbing call-back to his time in the military, which give context to how this guy is, in many ways, a broken shell of a man who clearly has suicidal tendencies but an even deadlier approach to his new profession. Phoenix does incredibly well at showing this man’s utter vulnerability beneath the tough-guy exterior, as scenes where he’s caring for his mother offer a more human side to his potentially one-note character, so when horrible things happen to him you definitely feel some empathy for his cause and predicament. His performance and the character arc he is given is clearly what Ramsay is more invested in than the several depictions of violence, and her priorities are earned because it is such a great performance by Phoenix as well as a complex and fascinating character that we are fine with following all the way through one horrific thing after another.

The levels of intensity are through the roof on this thing, as you’re constantly on edge as you learn just enough about this disturbing and dark work of child sex trafficking, and how far the conspiracy in this movie ends up going, to feel more disgusted than any on-screen violence it could throw at you. It’s not a long sit either, at just around the hour-and-a-half mark, so all of it may seem to just come and go, but as Ramsay has proven time and time again in the past, whatever she ends up showing you on the big screen is unlike many things you will have seen before, and will haunt your nightmares more than most of the actual horror films out there right now ever could.

It’s a profound and extraordinary piece of work that Ramsay and her team should be proud of, even if its content is most certainly going to put people off – but since this is that good of a movie, that’s their loss.

You Were Never Really Here is a dark and disturbing tale that’s made unique by Lynne Ramsay’s unapologetically provocative direction which handles violence in a very interesting way that shifts the focus more on Joaquin Phoenix’s excellent and haunting lead performance.