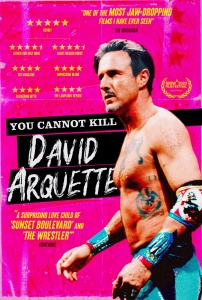 BASICALLY…: Actor David Arquette makes an ambitious return to the world of wrestling…

If you were to ask a wrestling fan what their opinion was on David Arquette, you’d be lucky if all you get in return was a punch to the gut and spit on the face. In the wrestling world, the Scream actor is something of a pariah; in 2000, while promoting his wrestling-themed movie Ready to Rumble, the actor competed in World Championship Wrestling and unexpectedly won the World Heavyweight title, despite very little experience in the sport aside from a lifelong appreciation of it, and a scrawny build that was dwarfed by the beefier bodies of his peers. His brief stint also cost him a stable career in Hollywood, where nobody seemed to take him seriously on account of his wild behaviour as well as his functioning alcoholism.

However, if You Cannot Kill David Arquette proves anything, you should never underestimate the underdog.

A fascinating documentary that you’d swear was Joaquin Phoenix-esque performance art until you realise it’s actually real, the film charts Arquette as he makes a bold and ambitious return to the independent circuit of wrestling, training harder than ever before and taking things far more seriously (or at least as seriously as a natural eccentric like Arquette can), ultimately winning the respect and adoration he was denied nearly twenty years ago. The movie also includes appearances by several members of Arquette’s family and inner circle of friends, including his wife Christina McLarty Arquette (also a producer on the film), his former spouse and Friends star Courteney Cox, and his slightly more prolific sisters Patricia and Rosanna Arquette, who all share their cautious support for his resurgence in the wrestling world despite the ridicule he received back then and still does to this day.

You certainly get a lot of Rocky vibes here, with its focus on a central figure who aims to win respect through an unlikely sport, and it’s hard not to root for Arquette as he shows great admiration for an industry which he clearly harbours a deep love for, even more so than his stalled movie career. The film paints Arquette as a man of passion, someone who will show up to wrestling conventions even when nobody pays a visit to his table, and who will valiantly allow himself to be beaten and bloodied at a small-time gig in someone’s backyard. He is also a somewhat tragicomic figure, certainly a goofball when it comes to his various costumes and wrestling moves, but also carrying some severe mental problems brought upon by years of torment and ridicule, which could also explain his tendency for alcohol and other bad habits. Directors David Darg and Price James don’t shy away from showing some of his lower moments during his progress, whether it’s passing out drunk at clubs or at conventions, or a hospital scene where he’s injected with ketamine and rambling like a lunatic. They certainly make you yearn for his ultimate redemption because you see him really trying to make it work, and when you see him in action you’ll be cheering as much as you would during any Rocky movie.

It’s a movie with a considerable amount of heart, not just for the world of wrestling but for this guy’s clear dedication to his craft, and the movie serves as a fun, often brutal (especially during some particularly hardcore “deathmatches”) depiction of Arquette’s admirable return. There’s a lot of joy to be found in the numerous training sequences, particularly one in Mexico where Arquette partakes in an unusual display of street wrestling, where fighters bust their moves in front of heavy traffic and hustle for the drivers’ spare change. Eventually, when Arquette’s training pays off and he starts to command the ring with much more showy manoeuvres than a couple of decades prior, it’s rewarding to hear the crowd suddenly start to legitimately cheer him on for the first time in his wrestling career, and through some tight editing as well as a couple of choice music cues, Darg and James make you feel as exhilarated and energised as when Rocky Balboa finally beat Apollo Creed. Most of all, though, you actually care for Arquette and his ambitions, and you’re emotionally invested in whether or not he’ll actually go all the way and finally receive some of his long-overdue acclaim.

While certainly a stranger-than-fiction narrative, You Cannot Kill David Arquette defies its bizarre origins to build a fun and energetic underdog tale of wrestling’s most unlikely figures.

You Cannot Kill David Arquette is a fun and entertaining documentary charting the actor-turned-wrestler’s return to the ring, where the central figure is presented as a troubled but deeply passionate underdog who you’re rooting for all the way, with the Rocky-esque structure also lending a crowd-pleasing quality that’s hard to resist.

You Cannot Kill David Arquette is now available on demand.