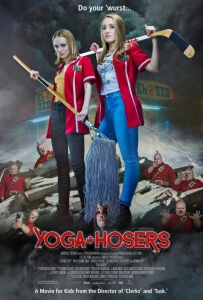 BASICALLY…: Two teenage store clerks (Smith and Depp) must spring into action when they uncover an ancient evil in their Winnipeg community…

Kevin Smith’s relationship with film critics has never been easy, with the Clerks and Chasing Amy filmmaker repeatedly chastising the reviewing community by comparing them to bullies laughing at the mentally-handicapped child, and even suggesting that critics pay to see advanced screenings of his work after the heated reception of his 2010 film Cop Out. In recent years, Smith has eased up on critics (mostly because they gave favourable reviews to his horror-comedy film Tusk in 2014), and has admirably vowed to continue making films designed to appeal more to general niche audiences than people who write reviews for a living.

Yoga Hosers, his latest film and the second in his “True North” trilogy following Tusk (soon to be completed by a film called Moose Jaws, which Smith describes as “Jaws with a moose”), is exactly the kind of film designed for anybody except critics that Smith was talking about, so it’s pointless trying to write a review with your critical mind in full working mode, because more than likely it will not be able to cope. Instead, it works best if you just switch yourself off and go in with fresh and open eyes, and when you put that method into practise it actually works rather well.

Designed as a bizarre hybrid of Clueless and Gremlins, we follow two teenage convenience store clerks, both named Colleen (one played by Harley Quinn Smith, the director’s daughter, and Lily-Rose Depp, the daughter of… well, you can guess), who become embroiled in a secret plot in their quaint Canadian hometown that involves, of all things, mutated Nazi soldiers made out of bratwurst. That’s honestly as far as we’re willing to go in terms of plot, because we guarantee that if you knew any more about it than mini bratwurst Nazis, you’d swear both Smith and this reviewer were just high off our collective arses instead of describing an actual film that got made.

Honestly, we have no quarrels at all with Smith as a filmmaker; if you ever get the chance to hear him speak live, or even on his many podcasts or YouTube videos, you’ll quickly discover that he’s an extremely well-spoken and passionate advocate for filmmaking and all its little quirks, and at the event we were at to see this film – a midnight showing at the illustrious Prince Charles Cinema in Leicester Square – he was there expectedly venting about his passion to a sold-out audience. Even if you don’t agree with some of his politics or even some of his movies, Smith should be admired for just going out there and making the kind of films he’s always wanted to make, no matter if they get slaughtered on Rotten Tomatoes or not, and just letting his absolute love for film guide his better judgement.

In that regard, it makes Yoga Hosers an admirable product; it’s absolutely not meant for critics, but instead it’s for anyone who’s stuck with the filmmaker throughout the years, from the highest of highs to the lowest of lows. Most critics are bound to chastise this film for numerous points – the increasingly nonsensical plot, the cheap-looking visual effects, the hit-and-miss humour, and many others – but for a mere audience member, that’s part of the charm. Of course it’s a load of silly nonsense, but there’s undeniable passion behind all of it that you can’t help but find fascinating; again, it’s from a guy who seriously loves his movies (and also HIS movies) and lets such love guide his own vision, so who are we to say that based on this film he’s incompetent behind the camera? Incompetent he is not, and may be smarter than a lot of critics give him credit for.

Even when you take out the more out-there elements of the plot and comedy, the film still has more than enough qualities for us to truly recommend it. Harley Quinn Smith and Lily-Rose Depp, life-long friends in reality, have undeniable chemistry with each other and have strong amounts of individual talent that could see them going on to fine careers in their own right; some of the comedy, though hit-and-miss at times, can be rather hilarious at the right moments, with stand-outs including Ralph Garman as a Nazi officer with many spot-on celebrity impersonations, and even Johnny Depp channelling Peter Sellers in a larger-than-expected supporting role as the French-accented detective he played previously in Tusk; and although not all the effects are flawless (those “Bratzis”, although filmed practically via green-screen effects, never quite look like they’re there when juxtaposed against their much larger co-stars), there are some great instances of practical effects including a later Bratzi-operated monster made of human skin (it happens) that really make us sad that filmmakers aren’t choosing this path over CGI nowadays.

There is a lot to take away from this film, and though it might make little to no sense there is still an extreme passion behind every single frame that manages to make us forget it’s technically sub-par. Smith may not be a filmmaker for everyone, and critics can rip into his work including Yoga Hosers as much as they like, but to us he’s a prime example of “critic-proof”, one that just goes ahead and does his thing no matter what people think. And you really have to admire that about the guy.

Yoga Hosers will undoubtedly invoke the wrath of many critics due to its nonsensical nature, but to anyone who is willing to switch off their brain for 88 minutes it’s an enjoyable delight, and even if you can’t then you have to admire Kevin Smith’s unquestionable passion for movie-making which is evident throughout several portions of this film.