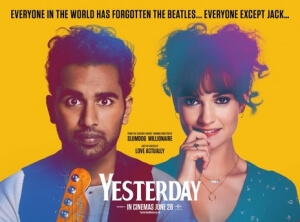 BASICALLY…: Struggling musician Jack (Patel) suddenly finds himself in a world where The Beatles never existed, and manages to find huge success by performing their songs…

Danny Boyle may have disappointed Bond fans by dropping out of directing the now-in-production 25th entry, but at least it’s given him more time to focus on his other projects, such as his anticipated collaboration with writer Richard Curtis for a film which definitely feels like the sum of both talents – although one creative vision is noticeably superior than the other, in this instance.

Yesterday, directed by Boyle from a script by Curtis, is the story of Jack Malik (Himesh Patel), a struggling musician who is failing to attract crowds or attention to his mediocre songs, and is failing even harder at realising his long-time friend and manager Ellie (Lily James) clearly has the eyes for him. One night, during a mysterious global blackout, Jack is struck by a bus and wakes up in a hospital to find that, somehow, all knowledge and evidence of the existence of The Beatles has completely gone, with seemingly only Jack remembering them. Sensing an opportunity, he memorises their songs and soon strikes it big on social media, eventually becoming a massive musical superstar following the tutelage of American manager Debra (Kate McKinnon) and none other than Ed Sheeran (playing himself) – but will his newfound success get in the way of him realising that he too has feelings for Ellie, even though it’s painfully obvious that she’s very much into him already?

The fact that a major story point revolves around someone failing to recognise that a woman as beautiful as Lily James clearly having the hots for them pretty much spells out right there that this is a Richard Curtis rom-com that you’re watching; whether it’s Love Actually or Notting Hill, his scripts are usually filled with silly contrivances but most of the time nobody cares because the overall tone is fun and bouncy which all but guarantees at least a considerable level of entertainment factor. It’s not that much different with this film, which is an amusing and likeable romp that feels about as light and harmless as many of his other films, but this one also happens to have the benefit of being directed by a real visionary like Danny Boyle, who pours his trademark playful energy into the camera angles, use of on-screen text, scene transitions et al, which as per usual with the vast majority of the director’s movies is wildly entertaining and visually fascinating. Boyle’s style is the jolt of electricity a movie like this needs, but the director is also generous enough to not let it overshadow some of the other elements, such as the cast who have fun with their parts including a self-parodying Ed Sheeran and a steely-cold Kate McKinnon as the de facto “evil manager” figure, while Himesh Patel does perfectly fine in his first leading role in a major project (although, on a personal level, some of his deadpan delivery was reminding me a lot of my brother-in-law – not a knock against this film by any means, I just wanted to point that out). Of course, there’s also the wide variety of Beatles songs that apparently cost $10 million to purchase the rights to use, which again Patel does a completely serviceable job at performing, and are used sparingly to not make that selling point be the only thing that matters here.

When you break it down, it’s a serviceable movie with some typically fun stylings from Boyle, but there was one thing in this movie that was driving me crazy all throughout the film, or more specifically one thing that ISN’T in this movie. There will be no spoilers here, but that makes it a little difficult to talk about because it involves going into detail about certain things, but I will do my best to stray away from divulging specifics. So, a number of months ago when the first trailer came out, I remember having a conversation with some people about it, during which one of us predicted a particular ending based on what we knew about the story; since then, it’s been the one thing that’s been going round and round in my head, and the more I thought about it and the plot that it was centred around, the more I realised it was probably the most logical outcome for this movie to take, given the surreal set-up and strange, almost dream-like style it was aiming for. Sitting through this movie, I was anxiously waiting for that shoe to finally drop, but it never did, and I felt so confused as soon as the end credits started playing – on the one hand, I’m glad that this movie didn’t turn out to be so predictable that I could easily call what the ending was going to be months before it even came out, but on the other hand, because I had been carrying around this thought for a while and concluded that it was the most logical place to end up – they even seem to hint at this very thing a couple of times, including some very suggestive dialogue that I now realise were giant red herrings – I thought that what they actually did with the ending actually made less sense than what I had thought they were going to go with. Granted, the ending I had been imagining would have been quite the massive cop-out (again, without going into exact specifics), but at least it would have explained so much about the story, certain characterisations, a couple of stylistic choices and rather a lot else now that I really think about it. It leads me to wonder if there’s an alternative cut of this film where the ending I imagined for it is actually in there – that theory is further fuelled by the noticeable absence of actress Ana de Armas, who was originally billed as part of the cast and even briefly pops up in the trailer but is nowhere to be found in the theatrical cut – but the filmmakers decided to go with a slightly more Hollywood conclusion instead, although in doing so they actually wrote themselves into a corner with a lot of unanswered questions left dangling about this new reality that the characters seem to now be living in.

The movie overall is perfectly fine, but that one thing was what drove me absolutely mad about it, though I put that down to the script more than anything. Although, to use a Beatles reference, I should probably just let it be.

Yesterday is a light but likeable movie with director Danny Boyle’s stylistic flare and writer Richard Curtis’ rom-com sensibilities, although there are flaws that irritated me more than they probably should have.

Check out Yesterday showtimes in London
on Walloh.