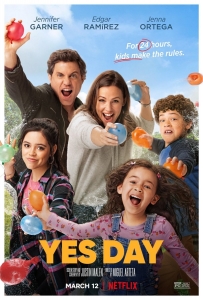 BASICALLY…: Two parents (Garner and Ramírez) decide to let their kids make the rules for a whole day…

The concept of a “yes day” – where families let the kids make the rules for 24 hours, and the parents must agree to every single request – is not a mere in-movie construct. It is actually a very real phenomenon, having been proven to teach children crucial lessons about responsibility and autonomy, and it largely stems from Amy Krouse Rosenthal and Tom Lichtenheld’s popular children’s book Yes Day which became a much-discussed topic with parents upon its publication.

It especially caught on after actress Jennifer Garner promoted the book on social media when she adopted its philosophies with her own family, which undoubtedly gave her the inspiration to both star in and produce this new family film for Netflix, based on both the book and her family’s own experiences with the concept. However, while it’s largely an inoffensive flick that’s okay for general audiences, it’s not something you should immediately say “yes” too, either.

Garner stars alongside Édgar Ramírez as Allison and Carlos respectively, a couple who was once spontaneous and free-spirited enough to say “yes” to just about anything, but since becoming parents their vocabulary has shifted to frequently saying “no” to their children, Katie (Jenna Ortega), Nando (Julian Lerner) and Ellie (Everly Carganilla). After realising that their children feel constricted by their strict parenting – to a point where they are sharing haikus and homemade films at school comparing them to captors and dictators – the couple learn about the concept of a “yes day” where, for 24 hours, they must say “yes” to every single thing the kids want to do, no matter how ridiculous. They soon decide to test out the concept for one day, and the family frequently finds themselves doing a range of activities from eating giant bowls of ice cream, to riding through the car wash with the windows down, to giant elaborate water balloon fights; all of which inevitably bring them closer together as a family.

Yes Day is, by all accounts, a pretty standard family movie; nothing spectacular, nothing dreadful, just incredibly average. It has all the stuff you’d expect to see in this kind of film, including pratfalls aplenty amongst adults along with young children running amok while a mix of lively orchestral music and trendy pop songs plays over the soundtrack, and at no point does it try to do anything more or less than the sum of its parts. The kids have lines you’d hear in a family sitcom, the adults get wildly performed moments of slapstick, there’s a shoehorned-in celebrity cameo; basically, all of the tropes you’d find in your typical family movie of the last fifteen to twenty years, you’ll easily find here. It does make the movie feel exceptionally bland at times, because a lot of it is a bunch of stuff that other family movies before it have done previously, either in better or worse ways, and there aren’t a lot of new and fresh directions that this one takes in order to stand out.

I will say, though, that for a family movie with this particular premise and these many familiar tropes, it’s not as overly obnoxious as it very easily could have been. Sure, there are a lot of lame gags and convenient plot points that you’d normally expect in one of these movies, but you can tell that there is at least a little bit of passion put into it by director Miguel Arteta and star/producer Jennifer Garner, the latter really diving head-first into a lot of the physical comedy, as does an against-type Édgar Ramírez who here is subjected to being attacked by CGI birds, having indigestion from eating too much ice cream, and singing along to the “Gummy Bear” song – and yet, still comes out more dignified than he did in The Last Days of American Crime. The kids, too, don’t come across as too bratty or intolerable, particularly young actress Jenna Ortega who, despite being made to look in the trailer like she’s still giving her parents crap even when they decide to let more loose, does have good intentions with any bad decisions she makes being about as normal as any other young teen at that age. All these actors look like they had a lot of fun making this movie, and I’m glad that they did because while the movie’s far from great, at least somebody got tons of enjoyment out of it.

That being said, Yes Day is strictly just for families with young kids; there’s really no reason to watch this on your own other than if you’re curious or if you some reason you cannot find the similar but better Instant Family on your Netflix list. It’s a generic family movie through and through, one that you find yourself saying neither “yes” nor “no” to, but instead just simply “meh”.

Yes Day is an inoffensive but largely bland family movie which contains many standard tropes done neither better nor worse than other examples, and while the cast clearly had a lot of fun making this movie there’s still not much else about it that will inspire you to completely say “yes” to watching it.