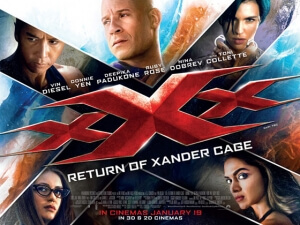 However, Diesel apparently had real faith in the xXx franchise all these years, and after the successful rejuvenation of the Fast & Furious series got enough street cred to actually go ahead and return as extreme sports star turned NSA agent Xander Cage, despite the character being killed off in the sequel. By the way, don’t expect any reason given as to why and how he somehow faked his own death, because the film isn’t occupied with the details – in fact, it isn’t occupied with anything at all, as this may well be one of the most brain-dead, downright retarded action films in recent years, bar none.

But here’s the thing about certain dumb movies, at least for me: there are sometimes films that are so stupid, so without any sense of the logical world, that you just can’t help but feel awed by what you are seeing, against your better judgement. Plenty of stupid movies have hit that sweet spot for me in the past, from Abraham Lincoln: Vampire Hunter to Con Air to the first Transformers movie, and now I can say with the utmost confidence in myself that xXx: The Return of Xander Cage – as mind-blowingly dumb as it unquestionably is – can now be considered one of those films for me.

It is a film that just filled me with such guilty joy, no matter how much I was consciously aware of how profoundly idiotic it was. This is the kind of film that has a plot as thin as a single sheet of paper – bad guys are using a device known as “Pandora’s Box” to disable satellites and kill people with the debris, and Diesel’s Cage alongside a team of fellow thrill-seekers must race to find it before another team, led by Donnie Yen – but none of that matters, because it’s made very clear early on that plot is one of the last things on its mind. It’s mainly an excuse for several stupid things to happen on-screen, with each new thing being even more stupid than the last, and yet there was something so entertaining in its consistent lunacy that made me laugh out loud quite a few times while watching this movie, even though most of those laughs were unintentional. The first time we see Xander Cage in this movie, he’s literally climbing a giant tower as big as his ego, and shortly afterwards sliding down a dry hill on skis while flipping off security guards in mid-air, before riding on a skateboard and performing all sorts of crazy stunts that even Tony Hawk would call impossible. It’s that kind of movie, with a care-free attitude that is fully aware of its own silliness, but just goes along with it and doesn’t try to be anything that it’s so obviously not, such as a smart piece of cinema. Really, you’re just there for the ride rather than the substance, and most of the time it’s a pretty fun, if insanely dumb, ride.

That being said, I do still have to emphasise how dumb it really is. I know that I’ve said it quite a lot so far in this review, especially when saying how unapologetically fun it was for me, but it’s partly to urge you that I am not a sucker for dumb entertainment all the time, just a select few times like with this film. But to get real, it is still a dumb movie; none of it makes any logical sense, the action is preposterous, the characters lack any real charm to them (even Diesel’s Xander Cage is a much more unlikeable version of Dominic Toretto), and the camerawork is so haphazard that you can’t make out what’s going on half the time in the many CG-fuelled fight sequences. It is absolutely not a good movie, at least technically, but even so, for whatever unexplainable reason, this film worked for me. Maybe it was just the fact that it knew it was supposed to be loud and dumb that made it more enjoyable than something that took itself far too seriously, kind of like how the Fast & Furious movies slowly became after a pretty rough start, but despite everything I found it immensely easy to just switch off my brain and let the movie do its magic, because like I said, it establishes very early on that this is most definitely not a film for thinkers.

Would I go out of my way to recommend the movie? Not really, as I am hearing from more and more audience members that even they were turned off by how dumb it could actually get, and not everyone – even lovers of certain kind of stupid Hollywood movies like this one – could get behind it. I think you just have to be in the right frame of mind to allow a film like xXx: The Return of Xander Cage to somehow be a fun and entertaining ride even though it lacks all the things that should make a good functioning film, let alone a sequel to two films that weren’t that great to begin with, and for me I guess I was in that right frame of mind to be awed by such sheer on-screen stupidity.