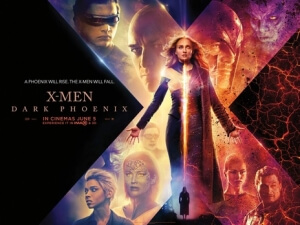 BASICALLY…: After coming into contact with a solar flare, young mutant Jean Grey (Turner) develops some new sinister powers, which cause the X-Men to turn on each other…

Among the most anticipated changes following Disney’s purchase of 20th Century Fox is how Marvel Studios (which is already owned by Disney) will incorporate the Marvel properties previously owned by Fox into the MCU; there will undoubtedly be rebooted versions of the Fantastic Four, the Silver Surfer and, of course, the X-Men being introduced at some point over the next few years, all of which will try to distance themselves from previous incarnations to appear as fresh and new as possible.

That can only be good news for the X-Men property, which after numerous movies, countless timelines and several filmmakers coming and going from the series, is in desperate danger of appearing staler and staler with each passing film, and now its blandness has reached its peak with X-Men: Dark Phoenix, a movie that closes out the First Class timeline with an indifferent whimper.

Set in the 90s (though like its predecessor Apocalypse it does absolutely nothing with its timeframe; it really could have been set at any time in history and nothing would feel different), the X-Men are national heroes whose leader Charles Xavier (James McAvoy) is sending on more and more dangerous missions; their latest endeavour involves them heading into space to rescue some astronauts from an incoming solar flare, but team member Jean Grey (Sophie Turner) is caught in the blast and absorbs the entire thing. Although she miraculously survives, she begins to develop some powerful new abilities that start to corrupt her and cause her to become a danger to both humans and mutants alike. When tragedy strikes, and Jean is taken in and influenced by a shapeshifting alien race led by Jessica Chastain’s Vuk, members of the X-Men are forced to choose sides in how to deal with this new threat, which sees Xavier’s old friend and ally Erik Lehnsherr (Michael Fassbender) coming out of hiding to try and rid the world of this new evil once and for all.

The movie takes heavy inspiration from the legendary Dark Phoenix saga from the X-Men comic books, which is such a well-known storyline that even those who don’t read comics are at the very least familiar with it; after all, it is considered one of the very best X-Men sagas, for its complex character growth and dramatic emotional arcs. Of course, this isn’t the first time that this story has been adapted for the big screen, with director Brett Ratner famously botching it in his overstuffed series entry X-Men: The Last Stand where it was mostly reduced to Famke Janssen just staring daggers at people while bad stuff happens around her, and between both this movie and that one this is probably the stronger of the two in terms of adaptations; however, much of the intrigue and complexity of the story feels missing here, and in their place is nothing particularly interesting to keep you invested. It’s a very by-the-numbers movie, which sees director Simon Kinberg – a long-time writer on the film series who is making his directorial debut here – try as hard as he can to translate the genuine drama of the page onto the screen, but neither the direction nor the writing are strong enough here to make you care about any of it, so a lot of what he is clearly going for here mostly falls flat and becomes rather bland.

Not even the ensemble cast seems to want anything more to do with this franchise, and given the nature of some of their performances they must be excited for this series to be rebooted by Disney as well. A major character death was highlighted in one of the film’s early trailers (which is never a good sign), but when you see the kind of disinterested performance this particular person is giving here – and keep in mind, this is a character that’s appeared in all four movies in this particular timeline, starting with First Class all the way up to now – you’ll understand why the prospect of death was so enticing to them, because it’s clear that they’re only here as part of a contractual obligation and have zero love left for a franchise they’re now desperate to move on from. The rest of the cast are either just slumming it (Evan Peters’ Quicksilver, a highlight in the previous two X-Men movies, barely makes an appearance here) or are pretty bland, with the only one of them to even try and give a performance that’s worth a damn being Sophie Turner, who is giving it her all here despite the material not being fleshed out enough to give her character the emotional arc that she deserves.

It is a rather dull superhero movie, one that was made only because there was one more movie on each one of these actors’ contracts and by God were they not going to waste a single one, even when it’s blatant that hardly any of them want to do these movies anymore. However, I wouldn’t necessarily say it’s as bad as the Rotten Tomatoes score currently suggests; it’s certainly not very good, but you can sense that Kinberg was at the very least trying to adapt as faithful a movie to the Dark Phoenix saga as he could, and there are moments when you can see the complexity of it shine through, but those moments aren’t often enough and what you’re left with is a bland movie that’s just killing time until Disney gets its hands all over this superhero property.

When that happens, and it won’t be soon enough, let’s hope they try and make the X-Men exciting again, because how things are left here it seems the world of mutants no longer has any real joy to it.

X-Men: Dark Phoenix closes out the series on a bland whimper, with by-the-numbers direction and disinterested performances from actors who desperately want out of this franchise, despite the clear attempts to appear as faithful to the classic comics storyline as possible.

Check out X-Men: Dark Phoenix showtimes in London
on Walloh.