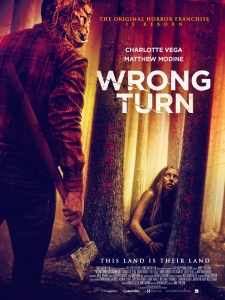 BASICALLY…: A group of hikers are hunted by a hostile community of mountain-dwellers…

It isn’t surprising to see horror franchises spawn from cult classics from Halloween to Friday the 13th to A Nightmare on Elm Street, but what is surprising is that there’s one spun from Wrong Turn. Apparently, there was enough of an audience for the otherwise unremarkable 2003 film – best known for its line of inbred cannibal killers – to spawn two sequels, two prequels, and now two reboots (this one being the second, following 2014’s Wrong Turn 6: Last Resort), all of which bare the name of the original and tie to it in some form.

In the case of this brand-new reboot, which is confusingly also called Wrong Turn (at least in the UK and US; in other countries, it bears the more appropriate title Wrong Turn: The Foundation), the similarities with past series entries appear to merely stop at the title. Otherwise, any fans of the previous films hoping to see plenty more inbred cannibal mayhem may find themselves somewhat caught off-guard for how little it connects to anything beforehand – but still, don’t write off this one just yet, for there are some surprises in store here which are at the very least worth sticking around for.

Wrong Turn circa 2021, it has to be said, doesn’t start off especially promising: after a brief prologue following Matthew Modine as a concerned dad going about a small Virginia town asking about his missing daughter Jen (Charlotte Vega), we suddenly cut to six weeks earlier – yep, it does that old cliché – when Jen and her college pals head to the town to prepare for a hiking trip along the Appalachian Trail. At first glance, these six young people are nothing more than mere millennial stereotypes; they make obnoxiously progressive statements that feel like attention-grabbing tweets, snap selfies on their phones, and lack a great deal of subtlety when expressing their views (you can tell which two are the gay couple because they’re always shown together side-by-side like they’re Siamese twins). Crucially, they also don’t listen to the locals’ advice about staying firmly on the trail and not wandering off course; naturally, they find that out the hard way, and soon the group finds themselves hunted by a tribe of mountain-dwellers who don’t take too kindly towards the group’s hostility towards them.

So far, it seems like your typical survival horror film, from obnoxious characters with little personality to some gruesome wilderness deaths,  and it’s neither scary nor intimidating because you’re just waiting for some of these people to get what’s coming to them. But then, roughly around the midway point, the film drastically shifts into a completely different gear. To go into too much detail would undermine the surprising road it heads down, but it almost immediately makes some of the characters and their situation a whole lot more intense and nerve-racking than expected. Some of the ideas that it puts into practise from this point out are rather creepy and menacing, and it gives the film a truly unpredictable nature that was sorely missing from its first half, which begs the question as to why the whole film couldn’t be this intense since, up to this point, it was nothing more than a stock, formulaic horror movie set in the wilderness.

However, there are still a lot of really dumb things about this movie that remain, no matter which half they show up in. Some of these characters – few of whom you actually care about, because they’re either devoid of personality or cartoonishly unlikeable – make really terrible decisions that end up making things a lot worse for everyone else, and it’s also one of those plots where a simple conversation between the young people and these townsfolk could have saved so much trouble (one quick aside before they head off on this hiking trip to tell them about a deadly tribe that will kill anyone who ventures off-path would have at the very least coerced them into sticking to the rules, if not abandoning the trip altogether). One of the final scenes in the movie also screams like it was added on because it was a producer’s note in the script, but that is partially made up by a well-crafted final shot that chillingly plays through the credits.

The movie has some decent filmmaking involved, including writer Alan McElroy who wrote the first Wrong Turn movie and now returns to the series for the first time since then, and some of Nick Junkersfeld’s cinematography which captures the vast Appalachian wilderness is honestly not that bad. A good chuck of the gore effects also stand out, as is to be expected by a series that seems to have made a name for itself on over-the-top gore. The direction by Mike P. Nelson, though, is a little uneven; you can feel the tone swaying violently from knowing social commentary to bizarre body horror, without much intelligence put into some of this writing to make those elements work in the same way that, say, Get Out worked. This is much more of a straightforward horror, one that takes itself perhaps a bit too seriously and doesn’t have that much fun with its increasingly strange premise, no matter how unexpected it may be.

It really should bare repeating that fans of the Wrong Turn series thus far, even complete novices such as myself going in without seeing any of them beforehand but hearing enough about what happens in them, should not expect much of the familiar sights here. To some, this will only be a Wrong Turn movie in name only, and that’s a fair statement, but even if you are the biggest fan of this franchise you shouldn’t completely write off this before you see it; chances are, you’ll find some truly surprising new additions that help make it not especially great, but a little bit better than what you might think it’ll be.

Having never seen a Wrong Turn movie before until now, I can at the very least say that while this is not going to stick around in my head for long, I appreciate that it was different than what I has expected.

Wrong Turn makes some bold choices in this franchise reboot, which might put some long-time fans off with its completely different direction, but while it suffers more in its first half with plenty of stock characters and dumb plotting, a midway shift in gears does amp up the suspense and intrigue to a point where you’re at least more interested than before.

Wrong Turn is out now to rent or buy on digital platforms, including Amazon Prime Video.