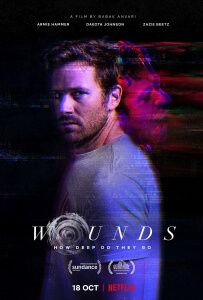 BASICALLY…: A bartender (Hammer) experiences a series of disturbing events when he picks up a phone left behind in his bar…

This review is of the cut shown at the BFI London Film Festival in October 2019 – it is currently scheduled to debut on Netflix on October 18th 2019.

His debut feature Under The Shadow was a horror movie unlike any other, and stood out greatly with critics and audiences for being its own unconventional self, so it’s a little disappointing that for his sophomore feature Wounds – soon to debut on Netflix here in the UK – writer-director Babak Anvari has made a conveyor belt horror movie that barely steps a foot out of line.

Failing to live up to the promise set by his previous film, Anvari instead gives us the tale of Will (Armie Hammer), a New Orleans bartender who, one night, picks up a phone left behind by a group of underage college kids after a violent barfight. Will soon begins experiencing a series of disturbing events when he starts receiving some chilling messages, which haunt both him and his detached girlfriend Carrie (Dakota Johnson), and get in the way of his clear attraction to former flame Alicia (Zazie Beetz), who frequently visits his bar with her boyfriend Jeffrey (Karl Glusman).

It leans towards this mix of psychological thriller and straight-up supernatural horror, an interesting combination but one that doesn’t always produce the right results. At first, the focus seems to be on how these events are causing Will – initially introduced as this seemingly chilled, friendly guy – to completely fall apart, becoming angrier and more resentful of people he once considered to be close friends, which itself would be a fine plot on its own. It’s even supported by a strong turn by Armie Hammer, who is a great actor with charisma and screen presence to spare, and here gets to revel in his character’s slow-paced self-destruction. However, the supernatural element that holds everything in place feels tacked-on, as though the producers approached Anvari and expressed concern that the mere psychological study wasn’t scary enough, and then suggested he cram in a complicated and unnecessary supernatural mythos that’s like nearly every other horror movie ever. It takes away any of the intrigue the plot otherwise suggests – is he going crazy? Is he finally expressing himself after compressing all of his negative thoughts? – because it shows you, right there and then, that something not of this world is causing all of these disturbing things to happen, like some kind of less-than-divine intervention, instead of having any of it actually be the working of the characters themselves.

It’s a shame that Anvari cannot match the subtlety or the sophistication that he accomplished previously with Under The Shadow, at least in the script department, because regardless of the material he has a keen eye for filmmaking. Scenes are shot with a shaky immediacy, sometimes like a Paul Greengrass movie with a severe case of arthritis, and the cinematography does express a moody tone which the filmmaker is clearly aiming for here. He also knows how to create effectively creepy imagery, from the hordes of cockroaches that appear whenever they so please, to Dakota Johnson staring blankly at a deep tunnel on a computer screen with heavy bags under her eyes, completely hypnotized by it. Though the filmmaking isn’t technically at fault here, it is still undermined by a script that fails to dive into some of the themes it’s trying to introduce, develop some of the characters or plot lines that come and go, and doesn’t even feel all that scary, comprised of jump-scares that are only there because it’s a horror film, and not to further any atmosphere or suspense.

This is also one of those horror movies where it all comes to a head for the ending, and not in a good way. Without any spoilers, the conclusion to this film ends up raising far more questions than it thinks it’s answering, and leaves so many threads dangling that it feels incredibly unsatisfying. What’s more, it doesn’t even feel like an ending; the way it is paced, acted, shot and edited, it feels like the inciting incident that transitions us from the second act to the third act, which makes it all the more jarring that when this scene does end, the credits start rolling. It’s not as big of a middle-finger ending to a horror film as something like The Devil Inside, but after so much build up only for it to stop when it really should be beginning – or at the very least finally moving forward – it’s a massive letdown that leaves you more confused than startled.

What makes it an even bigger disappointment is that you can tell that there is passion being put into this film. Anvari, as he’s proven with Under The Shadow, is an incredibly competent horror director and you can feel that he was putting his all into this film from behind the camera, and it’s filled with some very strong performances by actors who are also giving it everything they’ve got, but it never takes off because the script they’re all working from just won’t let them. Hopefully he can pick himself up again for his inevitable third film, but for the time being Wounds is a rather sad letdown.

Wounds fails to live up to the promise that writer-director Babak Anvari set with his debut feature Under The Shadow, with its awkward mix of psychological thriller and overcomplicated supernatural mythos dragging itself down by the shoulders, and is completely submerged by an extremely unsatisfying ending that leaves so many questions unanswered and, most likely, a lot of disappointed audience members.

Want to decide what the movie’s like for yourself?
Check out Wounds showtimes in London
via