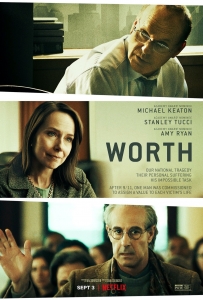 Countless families and loved ones lost someone close on September 11th, 2001. Even twenty years on, the pain is still felt by many around the world, but none more so than the grieving folks whose mothers, fathers, sons, daughters, wives, husbands etc. paid the ultimate price for simply being in the wrong place at the wrong time. Their worth cannot be replaced, or bought out, but that didn’t stop a group of lawyers from trying hard to do that anyway, regardless of the inhumanity surrounding it.

Their efforts are dramatized in director Sara Colangelo’s Worth, which presents the struggle for appropriate compensation in the wake of such a major incident as a redemption arc for the stuffy, bureaucratic lawyers placed in charge of it. While it’s not quite as dramatically engaging as it perhaps ought to be, it’s barely saved by some fine performances and heart-breaking scenarios that prevent it from a fate of po-facedness.

Our main focus is Kenneth Feinberg (Michael Keaton, sporting a heavy Boston accent for the part), an attorney who is appointed “Special Master” of the 9/11 Victims Compensation Fund shortly after the events of that fateful day. The fund has been set up by the government and several airline companies for close relatives of those who perished, in order to avoid a major lawsuit that could severely disrupt the economy, with Feinberg’s role being to come up with a formula that generates a fair, acceptable pay-out for the thousands of people who lost someone on 9/11. However, the plans are met with anger and contempt by several people, including widower Charles Wolf (Stanley Tucci) who sets up a “Fix the Fund” opposition group in response, and with a deadline fast approaching Feinberg and his team of professionals struggle to get enough people to commit to the fund, before it is returned to and passed by Congress.

With its sobering tone, emotional subtext, dozens of scenes where people are interviewed about their experiences, and not to mention the fact it also stars Michael Keaton and Stanley Tucci, it’s difficult to watch Worth without also thinking about Spotlight. Colangelo’s film, from a script by Max Borenstein (who’s radically changing pace here, given he’s also the writer of many of the recent “MonsterVerse” blockbusters), does evoke similar reactions to Tom McCarthy’s standout Oscar-winner, which often makes you think about how much better that movie is instead of being fully engrossed into this one. A major reason for that is Borenstein’s script lacking a firm narrative hook, which should serve as a good enough reason for viewers to become invested in the unfolding plot despite all the complicated jargon, but is for whatever reason absent in a film that ought to be more accessible to those who don’t know much about legal systems like this. It’s not that you don’t care about what’s going on, but you do feel alarmingly lost in all of the dry, reserved manner in which it’s laying on a lot of complex terminologies at once (to borrow from The Big Short, this movie needed Margot Robbie in a bubble bath to explain what certain things are).

Although it struggles to get you invested in the story it wants to tell, Worth is, erm, worth it for a couple of good reasons. For one, the acting is solid; Michael Keaton does very well here (although, again, his heavy and thick Boston accent can be hard to pierce through at first), as does Stanley Tucci in a pair of restrained and studious main performances as each one tries hard to respect one another despite being on completely different sides of the argument. There’s also some strong supporting turns from the likes of Amy Ryan and Shunori Ramanthan, as well as Laura Benanti as a particularly emotional 9/11 widow whose tricky situation regarding her late firefighter husband’s personal endeavours could honestly fill an entire drama in and of itself.

The movie also does an effective job of conveying the pain and suffering of people directly effected by the attacks. Scenes where people are just relaying the final moments of their loved ones’ lives while barely holding it together are among both the strongest performances and writing in the movie, as you can feel the gut-punch of emotion come roaring through as tears are shed, accounts are told, and somewhere in between you even hear recorded evidence of some haunting voicemails. It is an effective and appropriately emotional way to honour those who lost someone on 9/11 without going completely overboard with the sentimentality, and gives both the main characters and the viewers themselves the chance to feel a great deal of empathy for people who have gone through hell and back.

Worth could have used more of that if it wanted to stick out more, but as is it’s a fine if not impressive drama about the true worth of a loved one. Re-watch Spotlight it you want something much more engrossing.

Worth is a neatly streamlined and occasionally effective 9/11 legal drama which, despite strong performances and heavy emotion, struggles to find a truly engrossing narrative hook.

Worth is now available on Netflix.