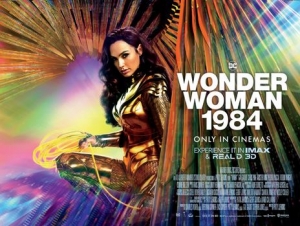 Across her almost 80-year history in comics, television series, cartoons and films, the Amazonian warrior Wonder Woman has fought gods, dictators, maniacal businessmen and murderous cyborgs – but now she is facing off against her biggest enemy yet: the year 2020.

Okay, so she might not be exactly piercing her sword through the COVID-19 virus, or using her lasso of truth to make Donald Trump accept the election results, but her return to the big screen, following her acclaimed first solo outing three years prior, obviously still comes at a very testing time for the world. Many of us have been knocked down by the constant – and ongoing – restrictions designed to curb the virus, with the time spent away from close family and friends doing numbers against our mental health and overall positivity, all while so much stuff is happening in the world (from rising unemployment rates to environmental disasters) that it’ll make anyone feel down.

Despite all of that, in comes Wonder Woman herself to try and save the day, or at the very least raise our spirits by installing a newfound sense of hope and joy with a gloriously fun, big-hearted and good old-fashioned superhero epic, one that’s not only stronger than the first film but also immediately in the plethora of great comic-book sequels like The Dark Knight or Sam Raimi’s Spider-Man 2.

Wonder Woman 1984 is set – duh – in the 1980s, some 60-odd years after the First World War escapades of director Patty Jenkins’ previous entry. Diana Prince (Gal Gadot) still keeps herself busy by fighting crime and nabbing evil-doers incognito, while also working at the Smithsonian Museum in Washington D.C. as an anthropologist. There, both she and timid gemologist Barbara Minerva (Kristen Wiig) come across an ancient stone that’s said to grant wishes, and the two of them unexpectedly receive their heart’s desires; for Diana, her fallen WW1 lover Steve Trevor (Chris Pine) unexpectedly returns, while Barbara slowly starts to find herself more confident and even stronger than ever. However, the stone is also attractive to struggling businessman Maxwell Lord (Pedro Pascal), who soon acquires it for himself and uses it to ignite a destructive and sinister path that Barbara is easily tempted by. Of course, it’s now up to Diana to stop both of them before it’s too late, but also at stake is her own wish that is keeping Steve alive, at the cost of her own strength.

In the film’s opening fifteen minutes, which includes several things from an epic Olympics-style tournament on Diana’s home island of Themyscira, to the heroic foiling of a mall robbery, you can spot the same energetic spirit and golden attitude that previously powered Richard Donner’s Superman or Raimi’s original Spider-Man trilogy. It has lots of joy and, erm, wonder to spare as it carries on keeping its head above water for most of its two-and-a-half hour running time (which, in one of the few criticisms I have against this movie, does feel a little lengthy at times), complete with sequences and character moments that rival such things as the famous flying scene in Donner’s Superman or even the No Man’s Land scene from the first Wonder Woman movie. Additional little things such as Matthew Jensen’s bright and colourful cinematography, or Hans Zimmer’s expectedly bombastic score, contribute to the cheerful and strong-willed personality that Wonder Woman 1984 exhibits, in a fiery display of heart, humanity and genuine heroics which plays extremely well after a year where we’ve had very little of that.

Jenkins once again holds everything together firmly, clearly a lot more confident on these big-budget sets than she was on the first film, and certainly freer to make the kind of epic superhero film she wants to bring to life, rather than keeping to a certain tone or visual style as was the way in past DC Universe films. The director seems to have developed a much sharper eye for action, established in those earlier sequences and later standout set-pieces like a chase on a Cairo highway or a showdown in the White House (even the visual effects, one of the oft-criticized components of the previous film, are stronger this time round), but she does not neglect her characters who once again provide the beating heart of the piece. Gal Gadot – promoted to producer for this one alongside Jenkins – remains a delight as Diana Prince, and she and Chris Pine still have very good chemistry with each other, with the script (which Jenkins also co-wrote) giving both of them neat little attributes that make them so loveable in their own ways; you’ll be smiling constantly as Pine’s Steve reacts with awe to the world of 1984, from the initiated space program to the horrifically dated fashion sense. Providing some parallel strengths are its villains, played with great charisma and surprising compassion by Kristen Wiig and Pedro Pascal, both of whom are given healthy amounts of moments to still be likeable even when doing and saying villainous things; these are very humanised baddies, and the actors do a great job at making you see their characters’ blinding, even tragic, descents into villainy.

Were this just like any other year, Wonder Woman 1984 would still be a standout blockbuster with fun and joy to spare. But, as we all know, this hasn’t been like any other year. Because of that, its strong themes of empathy and hope somehow hit a lot harder; this feels like a film that we all needed after almost twelve months of nothing but misery and dismay, and whether you see this in a cinema (where local restrictions permit; apologies and commiserations to all Tier 3 audiences right now) or in the safety of your home, you’re bound to feel the love warming your heart. In all, this film should be a firm reminder that while things are still bad for now, there will eventually be a time when we can come together once more and enjoy movies like this on the big screen, where the compassion and, indeed, wonder can be felt by all.

Wonder Woman 1984 is a delightful superhero sequel that has plenty of fun, heart and compassion for all audiences, helped by much firmer direction by Patty Jenkins, some energetic action sequences, strongly written characters performed just as well, and some hard-hitting themes of love and empathy that brings much-needed relief after the year of 2020.

Wonder Woman 1984 is out now in cinemas across the UK.