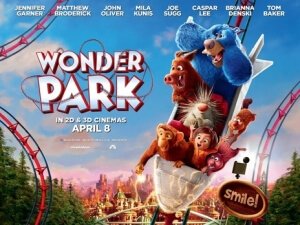 BASICALLY…: A young girl (Denski) discovers that the imaginary theme park she came up with is actually real…

There is nothing wrong with wanting to take your young children to a movie over the Easter holidays, but please make sure you take them to something like Missing Link, or Shazam!, or even Captain Marvel if your local multiplex is still showing it; that way, your child is guaranteed to be subject to something that’s actually thoughtful and not cynically conjured up to pander to a certain demographic, like Wonder Park which is such an out-of-control mess that it’s hard to watch it without getting some kind of mental sugar rush, and not in a good way.

The film is about a young girl named June (Brianna Denski) who, along with her mother (Jennifer Garner), dreams up an imaginary theme park called Wonderland – which seeing how the movie is called Wonder Park makes one wonder why they didn’t just go back and have the park be called Wonder Park if they clearly couldn’t use the name Wonderland as their title for some reason – but when her mother suddenly has to go away to get treatment for her cancer (yes, it really throws this heavy topic on its young audience, out of nowhere to add) June suddenly decides she no longer wants to dream about Wonderland and immediately adopts a cynical grown-up attitude. One day, however, she stumbles upon Wonderland in the woods, having somehow magically come to life, but it is abandoned with its animal inhabitants – including a narcoleptic bear (Tom Baker), two beaver brothers (Joe Sugg and Caspar Lee), a porcupine (John Oliver), a warthog (Mila Kunis) and a chimpanzee with a magical crayon (Norbert Leo Butz) – fighting off an ominous cloud called The Darkness and its army of “chimpanzombies” which are the park’s plush toys that are now evil and wanting to throw everything up into the cloud.

Are you feeling disoriented just from reading that slice of madness? Congratulations, because that means you’re normal.

This movie is utter insanity from the very start, an endless parade of surreal madness that only the minds of incarcerated patients at Arkham Asylum could come up with; it doesn’t so much bounce off the walls but rather zoom into them so hard they’ll leave a hole looking into the next room. It really is like watching a little kid with ADHD trying to tell you a story they came up with after binging on every single sugar-infused sweetie in the cinema’s Pick ‘n Mix, and you’re left sitting there politely listening to them when you’d rather be anywhere else at this moment. Perhaps it was the intent of the film’s director to have the film be paced and structured like a kid’s sugar rush – at least, until director Dylan Brown was fired after multiple accusations of sexual harassment; the film is left without a director’s credit as a result – but it makes itself come across as incredibly, annoyingly hyperactive and with very little logic in its thinking, even for a film designed exclusively for a significantly younger audience.

It tries to convince the audience – at least, the ones that are over the age of 10 – that it’s deeper than the standard children’s movie, with its heavy themes of grief, depression, and serious illnesses that form the larger chunks of the bonkers plot, but whereas a film like Inside Out or Kubo and the Two Strings managed to incorporate some very real topics into their kid-friendly stories, Wonder Park treats them mostly as an afterthought, brought up only to remind both itself and the audience that it’s saying far more impactful than it is. It’s mostly just comprised of one big set piece after another, filled with juvenile humour that zips by quick thanks to an incessantly fast pace that makes Sonic the Hedgehog look like, well, a regular hedgehog. Speaking of animals, the characters in this movie are as thin as a piece of paper, and that includes the furry occupants of the theme park who all have one defining trait and venture no further with it; the bear has narcolepsy, and that’s it; the two beaver brothers are always bickering, and that’s it; Mila Kunis is a warthog, and the movie doesn’t even do anything with that bizarre casting choice. It’s a random mess, with an extremely thin script that contains neither story nor character that’s deep and meaningful enough to pass as a solid piece of family entertainment.

I don’t think I can even say it’s a pretty movie to look at, because while the animation on its own is fine, the way it looks and how some of the lighting and framing choices pan out, it is not an especially appealing visual feast. Some of the designs and settings look okay, but the editing ensures they go by so fast that you barely have enough time to let your eyes soak it all in, and as soon as it does stop to take a breath it immediately rushes onto the next thing, because God forbid your little ones lose focus. The way that some of the shots are handled, they often look like they were filmed with a wide-angle lens, which on the one hand makes me think this would have been a (slightly) more tolerable experience in 3D than 2D, but on the other makes most things look disorientated and rather ugly, as it does with its toned colour scheme that makes this supposedly magical theme park look like something out of a post-apocalyptic thriller.

It’s a movie that will leave you mentally exhausted, but it doesn’t have the courtesy of being all that easy to absorb as you watch it. It really is the cinematic equivalent of dangling keys in front of your kid’s face; sure, they’ll be entertained, but before too long both you and they will get worn out and seriously need a nap. As to whether or not you should go and see it if your child wants to go, then put it like this: you can either feed your kid some nutritious and perfectly balanced vegetables, or give them an endless bag of sugar to munch on. It’s up to you which one you’d rather give them, but don’t blame us if you can’t control the hyperactive nature that you’ve unleased upon this world.

Wonder Park is a frustratingly insane family film that will wear you out with its overly-fast pace and thin handling of heavy themes, and will leave your child overly-hyperactive like they’ve ingested way too much sugar for their own good.

Check out Wonder Park showtimes in London
on Walloh.