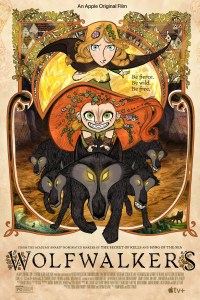 BASICALLY…: In 1650 Ireland, a young hunter (Kneafsey) comes across a mythical “wolfwalker” which leads a wild pack of wolves…

This review is of the cut shown at the BFI London Film Festival in October 2020 – the UK release date is currently listed for October 30th 2020, and will later debut exclusively on Apple TV+ on December 11th 2020.

You might not know Irish animation studio Cartoon Saloon by name, but you might be familiar with their work so far; all three of their previous features – 2009’s The Secret of Kells, 2014’s Song of the Sea, and 2017’s The Breadwinner – have received Academy Award nominations for Best Animated Feature, and come next year you can expect their fourth feature, Wolfwalkers, to also join the club since, much like its predecessors, it is entirely worthy of such acclaim and attention.

A fun, emotional and absolutely gorgeous family adventure, Wolfwalkers is essentially Cartoon Saloon’s equivalent to Studio Ghibli’s Princess Mononoke, in that it’s not only a wilderness-set tale involving magic and wolves, but also a creative highpoint for the studio that will be extremely hard to top – although, given Cartoon Saloon’s four-for-four rate of success thus far, that shouldn’t be too difficult.

Set in 1650 Ireland, the town of Kilkenny is under fierce control by the Cromwellian forces brought over from England, and is constantly under threat by a pack of wolves who occupy the surrounding forests. Our hero is Robyn Goodfellowe (Honor Kneafsey), the young daughter of British hunter Bill Goodfellowe (Sean Bean) who has been tasked with hunting down and killing the wolves in the forest; eager to follow in her father’s footsteps, Robyn enters the forest despite her father’s strong pleas not to, and soon come across a mythical creature known as a “wolfwalker”, which leads the wolves and also possesses the spiritual power to transform back and forth between a human and a wolf. The wolfwalker that Robyn meets also happens to be a young girl named Mebh (Eva Whittaker), who is desperately trying to search for her mother who has gone missing in her wolf form, and the two start to form a special bond that soon puts Robyn in an awkward position, concerning her father is under strict command by the ruthless Lord Protector (Simon McBurney) to kill any wolf he comes across.

Once again, Cartoon Saloon brings the goods when it comes to strong storytelling, which refuses to condescend to a younger audience and carefully builds up its range of likeable characters so that anyone of any age can sympathise with them. The film is both funny when it needs to be and also dramatic whenever required as well, never outstaying its welcome in either field and always keeping that magical tone consistent throughout. It feels like a film that would have easily come from Disney during its Renaissance period of the early 90s (when Beauty and the Beast, Aladdin and The Lion King were huge successes with critics and audiences), as it captures the wide-eyed mysticism of its enchanted world with such glee and passion that you’re constantly wishing you could go and visit these locations for yourself.

Massively helping towards those thoughts is how beautifully animated it is; establishing shots of forests and towns, sometimes even grubbier places like a kitchen or a makeshift hut, look convincingly three-dimensional despite the 2D animation, often shown in a circular pattern that makes nearly every shot look like it would look stunning as its own work of hand-crafted art on any given wall. The hand-drawn aspect of the animation can be felt in each rough outline you can spot on each character, which gives it a rustic, unpolished look that really makes the designs pop out more than any standard CG cartoon you can find nowadays. It also incorporates even rougher sketches for sequences that involve literal out-of-body experiences, and every time it switches from the cleaner main animation to something that feels so different yet just as adventurous is an artform in and of itself.

It is an absolutely beautiful piece of work that families can easily enjoy watching together, with adults appreciating the gorgeous animation on full display while kids can enjoy the colourful characters and appreciate the strong messages of not letting fear dominate you or the importance of co-existence. That being said, the film’s plot can easily irritate people because there are a number of similarities to stories previously seen in Avatar, Disney’s Pocahontas, Princess Mononoke, and (most appropriately) Dances with Wolves, right down to the villain being a power-hungry tyrant who won’t listen to reason and wages war against the “savages”. For my money, the familiar plot is portrayed well here – hell, it contains a far more subtle environmental message than Avatar does – but if it bothers you too much to enjoy anything else about the film, I’ll simultaneously understand but also disappointed, because Wolfwalkers really is a great film that deserves just as big an audience as any other more mainstream animated film.

There is so much to adore about this film that I honestly feel like I don’t want to give it too much attention, if only so I can just hold onto this dear little secret forever (which, of course, is impossible). Definitely make time to watch it, especially if you have children that need entertaining, and unless Pixar’s Soul turns out to be an unignorable masterpiece then you can count on this film being a prime frontrunner for next year’s Animated Film Oscar category.

Wolfwalkers is another fantastically realised animated adventure from Cartoon Saloon, with some absolutely gorgeous animation lighting the way for a strong (if familiar) story, likeable characters, and themes that should resonate with anyone of any age. It’s definitely among the finest animated films of the year so far.