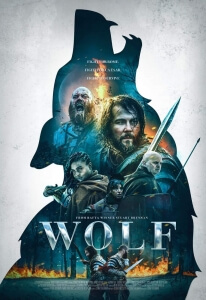 BASICALLY…: A band of Roman soldiers venture into a forest where they find themselves up against a ferocious enemy…

Until a week or so ago, I had no intention of ever seeing this film in the cinema. I had certainly heard of it, but after just one glimpse of the trailer I could tell that not only does it not feel or look like something that should be shown on the big screen, but that whatever theatrical release it does obtain would probably be limited to only a few cinemas sprinkled around the country, avoiding most if not all of the big cinema chains.

Imagine my shock and horror, then, when I see this movie listed as showing all throughout the week at my local Cineworld multiplex; even more so, however, when I saw that it seemed to be getting an exclusive engagement at Cineworld sites nationwide, giving it far more of a potential audience than it probably ever would have gotten had it just been relegated to more independent cinemas, or even on-demand. I’d like to think that the reason this movie is playing in as many cinemas as it is, throughout the country, is because director, writer, producer and star Stuart Brennan visited the Cineworld headquarters, got in a room with the company’s top programmers, and proceeded to give them all oral sex.

That is the only thing that makes sense as to why this movie, which is completely and utterly inept in every way shape or form, has suddenly shown up in cinemas across the country, when it has absolutely no right to be shown on the big screen in any capacity. This is appalling filmmaking with little to no redeeming qualities to it, and quite frankly it’s embarrassing that something so incompetent was given permission to be on as many screens as it is.

The plot of the film sees a bunch of Roman soldiers wandering through the woods on a mission to find some of their own men, only to be attacked by fierce creatures. I say “plot” in the loosest of senses, because not even the film seems interested in its own premise, which on paper could have worked if they had either the talent or the budget to pull it off. They have neither; the film is shockingly cheap, primarily using as few locations and actors as they can to save on budgetary costs, with the lion’s share of the money seemingly going to some of the most blatant fancy-dress shop Roman outfits and make-up that looks like it took only five minutes to apply. The extremely low budget also means we don’t get that many action scenes, but they try and make up for this by having scenes where characters are just explaining attacks that have occurred off-screen, foregoing the classic “Show, Don’t Tell” rule of Filmmaking 101 and looking completely foolish for doing so, and the action scenes that we do get are clumsily choreographed and edited so haphazardly to clearly hide the lack of financing that it becomes completely disorientating. They also seem to have not been able to afford a halfway decent editor, because scenes will just randomly end, flashback scenes will appear out of nowhere, and in quieter scenes you can easily pick up on the blatant ADR work and sound editing gaffes such as background noise that will just stop in the middle of a shot. Add onto that an extremely abrupt ending, and you have a strong contender for one of the worst edited movies of the year, if not the undisputed frontrunner.

If there was genuine talent in front of or behind the camera, the cheap quality of this movie could have worked, but director Brennan cannot seem to be able to compose or write a scene to save his own skin. Much of the dialogue is spent delivering clunky exposition in ways nobody, no matter what time period they’re in, would ever speak, and the characters are completely blank slates, with some being set up in such a way that they might as well have the words “Dead Man/Woman Walking” tattooed across their foreheads. The acting, too, is wooden at best; most of the performers are left to deliver their lines so blankly, because the script gives them nothing to work with and the direction is just as lost as they are. Speaking of the director, the worst performance oddly enough comes from Brennan himself; cast as one of the Roman soldiers – I hesitate to call him the lead character, if only because there really isn’t one in this film – Brennan delivers all of his own lines like he’s just begun rehearsing them in his own head, and remains monotonous and bland throughout, with absolutely no screen presence or charisma to his credit whatsoever. If this is a passion project for Brennan (although he has directed a couple of other movies before this one, including last year’s The Necromancer which has a strikingly similar plot to this film), then he’s made it with absolutely no passion whatsoever.

It’s unambitious, dull, ugly to look at, and abhorrently made, making many other bad movies released this year look like masterpieces by comparison, from Head Full of Honey to The Queen’s Corgi, to even The Haunting of Sharon Tate which, as awful as that movie was, at least had the decency to go straight to Netflix (in the UK, anyway). The fact that Wolf is showing on as many screens as it is, in the state that it’s in, is an absolute joke, especially when you think of all the other movies that were denied such a wide release like last year’s Annihilation, which this movie only succeeds in making you want to rewatch that film again due to all of its scenes of characters wandering around the wilderness. I understand that the lack of a large budget means you can’t do as much as you probably wanted to do, but if you are going to do something like this then you’ve got to at least have the talent to make it work even without the proper financing, or at least swallow your pride and let it go onto streaming platforms instead of making people pay proper ticket prices to go and see it somewhere that it never should have gone.

What’s even more distressing, I appear to have written the very first review for this movie on the internet; as of writing, there are absolutely no other critics that have taken a stab at this (they’re probably too busy being entertained by Downton Abbey or Hustlers instead), similar to how last year there were very few write-ups on Status Update when that (also somehow) got a theatrical release. So, if by a stroke of luck this is indeed the very first review you’re seeing for this film, take my word for it, and run like hell from it.

Wolf is an utterly dreadful experience that’s cheaply made, filled with wooden performances (worst of all from the director and writer himself, Stuart Brennan) and uncomfortable levels of filmmaking incompetence that leaves you embarrassed by the fact that this scored a wide theatrical release. Woof.

Want to decide what the movie’s like for yourself?
Check out Wolf showtimes in London
via