Without Remorse (Review) – A New Tom Clancy Hero Is Born 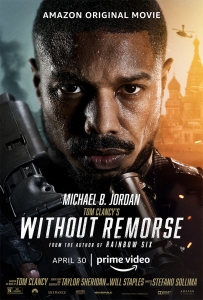 The late Tom Clancy’s most popular character is, by far, CIA analyst Jack Ryan, who has been portrayed a number of times on-screen, with actors Alec Baldwin, Harrison Ford, Ben Affleck, Chris Pine and John Krasinski all delivering different takes on the action hero. However, not many people are aware of Clancy’s other literary protagonist John Clark, who’s been portrayed significantly less than Jack Ryan has (although he was a supporting character in Ryan-centric movies Clear and Present Danger and The Sum of All Fears), but in Clancy’s so-called “Ryanverse” he’s a much more significant player with his own missions and even his own personality, and in Without Remorse – the first of at least two proposed films in a brand-new movie franchise – he’s finally front and centre in his own flick.

As an introduction to this character, the movie is a decent enough start, and they picked a rather good leading man to portray him, but it is ultimately a pretty formulaic first mission that doesn’t contain many surprises and should only be seen as a platform from which the character can jump from and onto better, more interesting things.

As in the original novel, Without Remorse plays out as an origin story of how John Clark became who he is. It first introduces our hero, known throughout by his original moniker John Kelly (Michael B. Jordan), during a rescue mission in Syria with other Navy SEAL ops, including his friend Lt. Commander Greer (Jodie Turner-Smith). Although the mission is a success, members of John’s team are brutally killed back in America, while John – who has since retired from the military – is left distraught after a hit on his house ends with his pregnant wife Pam (Lauren London) dead. Seething for revenge, John is soon placed on a mission to find the person who murdered his wife, only for things to go south when – surprise, surprise – he uncovers links to a much larger conspiracy at play.

The script opts for paint-by-numbers storytelling, hitting many familiar beats in pretty much the exact order they’re usually delivered, and leaving it very easy for the audience to figure out who can be trusted and who can’t (hint: one of the main actors in this film is known for playing largely sinister characters, and guess who they end up being here as well). It’s slightly disappointing, because this is a script co-written by Taylor Sheridan, a great writer who’s been behind many outstanding thrillers of the last few years like Sicario and Hell or High Water (even the film’s director, Stefano Sollima, previously helped Sheridan’s sequel script for Sicario 2: Soldado), but in Without Remorse he and co-writer Will Staples aren’t able to shake away from action-thriller clichés which you’d think a talented writer like Sheridan would be aware of by this point in his filmography.

While it’s not the freshest screenplay to start out this new franchise with, Without Remorse is partially saved by a few key elements. For one, Michael B. Jordan easily carries the film and proves himself a formidable action movie lead, balancing his natural charisma and some intense stare-downs with his enemies with a firm fist, and while there isn’t anything on paper for his lead character to stand out amongst the plethora of action heroes, Jordan gives him a rough enough edge to keep him from being a completely bland protagonist. In addition, Stefano Sollima’s direction – particularly in certain action scenes – is good at leaving you in a state of suspense, because while you’re certain that our hero will survive a number of things, whether it’s being shot at or diving deep underwater in a sunken plane, you’re never entirely sure how he’ll get out of it in one piece. There is a strong level of intensity which does make the movie somewhat entertaining, despite the weak material, and again it benefits from having an actor as good as Michael B. Jordan in the main role, who can still be cool as he’s sadistically setting cars alight or battling armed guards in a prison cell.

It’s easy to see why they decided to make Without Remorse the first major John Clark adaptation, because not only does the original novel serve as the character’s official origin, but it also sets up a number of later adventures that the character will soon find himself on. With this first film being entertaining enough to make me want to see more of this character, I can only hope that they put the character in more interesting scenarios that will ultimately bring out the best of this fan-favourite Tom Clancy protagonist. Who knows, maybe he’ll even cross-over with whichever actor plays Jack Ryan next in the future.

Without Remorse suffers from a formulaic script that contains few surprises and many more action movie clichés that co-writer Taylor Sheridan can’t seem to do anything about, but it’s made entertaining enough by intense direction and a strong lead performance by Michael B. Jordan that carries the movie further than a more generic story like this perhaps deserves.

Without Remorse is now available on Amazon Prime Video.