Wish Dragon (Review) – It Borrows Perhaps Too Much From Aladdin 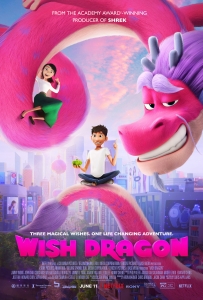 BASICALLY…: A lovelorn young man (Wong) comes across a magical dragon (Cho) that has the power to grant three wishes…

How can anyone not take one look at the plot synopsis for Wish Dragon, Netflix and Sony Pictures Animation’s American-Chinese co-production, and immediately think of Disney’s Aladdin (either version)? Yes, it’s an extremely obvious comparison to make, one that virtually every critic in the land is also making, but in all honesty there’s surprisingly little to talk about other than how similar it is to the other movie.

Mostly a by-the-numbers animated movie, harmless enough for families but lacking in depth for any true animation fanatics, Wish Dragon has an equal amount of things about it that are both decent and somewhat underwhelming, and pretty much every single one of them you can probably already guess what they are. It’s a very safe and predictable movie, but it’s not even close to being all-around bad; bland and forgettable, sure, but not bad.

Our main character is Din (Jimmy Wong), a young man living in the outskirts of modern-day Shanghai, who pines to be reunited with his childhood best friend Li Na (Natasha Liu Bordizzo) after she was whisked away to a life of wealth and luxury. As it so happens, Din comes across a magic teapot, which is home to a “wish dragon” named Long (John Cho), who has been stuck on Earth for 1,000 years serving numerous masters before he can enter the spirit world. Since Din is his tenth and final master, Long is eager to grant him his three wishes and be done with the gig once and for all; however, Din decides to use his wishes sparingly, especially when he decides to finally venture his way back into Li Na’s life. Soon, both boy and dragon go on a meaningful adventure where they learn the value of love, friendship, selflessness and so on, all while avoiding some thugs who want the teapot and its magical inhabitant for their boss.

Whatever kind of movie you’re picturing in your head, from the plot to the slapstick to the voice acting and all the way down to the style of animation, Wish Dragon is pretty much exactly that and nothing more. The animation is good and colourful, if perhaps rather rubbery at times (even the normal human characters seem to be able to flex their bodies in cartoonish directions), but it’s the kind of animation that is very standard for this kind of film, and aside from some scenes of stylistic ambition there’s not much to it that’s particularly striking. The characters are likeable enough, but again you’re constantly thinking of other, better movies that have these exact kinds of people in them; Din is basically Aladdin, Li Na is Jasmine, and take a wild guess who the Genie is supposed to be here. There’s nothing necessarily wrong with them in this context, but their arcs and overall personalities are so familiar that it’s near impossible not to think of something like, well, Aladdin as you’re watching them. The same exact thing can be said about the film’s messages, its comedy, a number of the supporting characters, and even the few moments of drama; it’s not that they’re all done poorly here, but at the same time the movie doesn’t exactly do anything fresh or interesting with them either.

That said, there are some decent things to say about Wish Dragon. Aladdin comparisons aside, the script has a few neat touches that do help it stand a little bit on its own; there are parts where it manages to subvert a number of tropes found in this kind of movie, whether it’s the “liar revealed” plot thread or the identity of the “main” villain and what their motivations are. It’s also interesting that they also have Long, the magical and all-knowing wish dragon, know virtually nothing about the modern world (since, y’know, he’s been living in a teapot for thousands of years), and while that does revert to some familiar fish-out-of-water gags – mistaking buses for giant creatures, drinking out of toilets etc – at least he isn’t making random and out-of-nowhere pop culture references like the Genie in Aladdin tends to do, because not only would that have made this character much more of a carbon copy, but there’s also no reason for him to do so anyway. The movie also has some rather fine voice acting, including John Cho who knows when to reel it back in and not just do a Robin Williams impersonation the whole time, and Constance Wu as Din’s mother who, despite the character not really having much of a purpose other than to nag and occasionally hit her son with objects, makes the most of what little time she has behind the microphone.

There isn’t much else to say about Wish Dragon, because it really is one of those movies that isn’t exactly bad but not exactly great either. It serves its purpose, and doesn’t strive to be anything more than what it is, but it could have used more freshness and wishful thinking to be at least something more than a slightly-above-mediocre Aladdin knock-off.

Wish Dragon invites far too many comparisons to Disney’s Aladdin and other similar family movies for it to be memorable or interesting enough on its own merits, but a couple of neat touches save it from pure mediocrity.