Willy’s Wonderland (Review) – How Do You Waste Nicolas Cage vs. Demonic Animatronics? 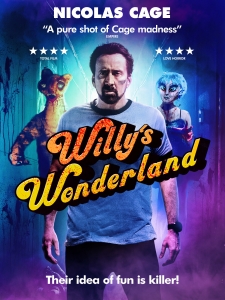 BASICALLY…: A lowly janitor (Cage) takes a job at a condemned family restaurant, where the animatronics come to life and start killing people…

An actual adaptation of the hit video game series has been stuck in development hell for more than five years, with the latest rumours saying that it might finally start filming this year (but don’t hold your breath, just in case). So, in the meantime, Willy’s Wonderland is the closest we’ve gotten yet to seeing those types of murderous animatronics on film – and honestly, if the Five Nights at Freddy’s movie is any bit as bad as this, then we’re in for a heap of trouble.

Cage plays a silent drifter – and that’s no exaggeration, for he has zero dialogue throughout the entire movie – who gets stuck in a small, backwater town that’s home to a condemned family restaurant named Willy’s Wonderland (think Chuck E. Cheese, only with slightly more sinister animatronics). He is tricked into taking a janitor role at the establishment, cleaning every corner of its rundown interiors, only to very quickly discover that the numerous robotic animals on display are not just alive, but thirsty for blood. Despite being able to defeat some of them very easily, Cage still carries on as normal – but it’s only when a group of dumb teenagers of course find themselves trapped inside the restaurant as well, that he actively steps up to defeat them – in the middle of his all-important soda and pinball breaks.

What perhaps sounds like it would make for an entertaining-as-hell movie – after all, who wouldn’t want to see an hour-and-a-half of Nicolas Cage killing a bunch of evil animatronics? – is disappointingly held back by a blatant low budget that cuts a lot of corners when it comes to its gore and action. As I’ve said before, a smaller budget doesn’t always equal a bad movie, but in this case it really feels like more money should have been spent on other things aside from its starry lead; the effects range from hilariously bad to simply eye-rolling, the cinematography opts for a lot of wide-angled lenses for no real reason other than to be extremely distracting, and it botches what could have been some effective deaths with endless strobe lights which makes it a potential viewing nightmare for anyone with epilepsy. It’s easy to see the appeal of putting someone like Nicolas Cage in a movie like this, but if you’re going to get him on board then you need to make sure you can afford other things at the same time, otherwise you have a promising concept that you can’t fully deliver on.

However, it’s doubtful that the movie would have managed to succeed, even with a modestly sized budget. Although it appears to be passing itself off as a horror-comedy, which to be honest seems like the most logical direction to take this concept in, the film is neither scary nor funny, because it takes little to no advantage of the B-movie thrills it suggests, not even in a satirical sense. This is a very stupid script filled with stock and extremely dumb slasher-movie characters who would be too dunderheaded even for a Friday the 13th movie. Seriously, these teenagers – among them, of course, a nerd, a stoner, a slag, a token black guy, and a final girl – appear to be fully aware of the backstory of the titular establishment (explained to us via not one but two awkward exposition dumps), including the fact that the animatronics come to life and kill people, and what do some of them do? Sneak off from the pack, find the room where it is specifically addressed that children were slaughtered in, and start banging away like jackrabbits. It’s little wonder what becomes of them, and they earn zero empathy because these are not characters who are written to be parodies of stock slasher movie characters; they really are just written that badly.

The stupidity doesn’t stop there, for there are plot turns that don’t make any sense (there may or may not be a conspiracy in this town about the restaurant, for reasons that are really dumb and could have been resolved so fast), and the acting amongst the supporting cast is not very good, so their line deliveries are either stilted or way too over the top to be believable, even in a silly B-movie plot like this. This is a movie where the acting is so wooden, that one of the lead characters witnesses the bloodied, mutilated corpses of their friends being devoured by one of the evil animatronics, and their facial expressions look less concerned than if they had just remembered that they’d forgotten to turn the lights off in their bedroom before going out.

As for Cage himself, his physical performance can be characteristically lively, and there are a few amusing Cage-isms such as rocking out whilst playing a game of pinball, but the lack of actual dialogue from his mouth leaves both him and us with very little character to work with, so there’s not a lot of reason for us to care about him other than it’s Nicolas Cage playing the part. Other than that, we know nothing about this guy, from what his backstory is to why he’s apparently so unfazed by killer animatronics trying to kill him, and certainly nothing that explains his mysterious obsession with taking regular soda and pinball breaks. The film only briefly works when he’s actually engaged in one-on-one combat with the animatronics, but they’re far and few in between the rest of the bollocks.

The advertising technically isn’t lying when it promises Nicolas Cage verses some evil Five Nights At Freddy’s rip-off animatronics, but they forgot to put in the part where the rest of the movie fails to live up to its greater potential, or even manages to entertain with what it’s got.

Willy’s Wonderland disappointingly gets little mileage out of its central concept of pitting Nicolas Cage against a gang of demonic animatronics, especially with its dumb script containing nonsensical plot twists, irredeemably stupid characters, and its far-too-small budget squandering its gore effects in favour of affording a mute Cage as its lead.

Willy’s Wonderland is out now to rent or buy on digital platforms, including Amazon Prime Video.