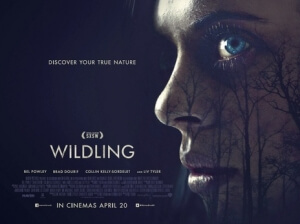 BASICALLY…: Teen Anna (Powley) has lived her entire life in isolation and in fear of a deadly creature, which causes problems for her when she is integrated back into normal society…

Before we get to Wildling, I have to share this amusing anecdote which doesn’t have anything to really do with the movie, but I feel is worthy enough to write about. So, picture the scene: it’s Friday evening, and there’s a good amount of people – myself included – seated in one of the smaller screens of the multiplex, ready to watch this movie. Then, just as the lights dimmed down and the BBFC card flashed up on screen, a middle-aged man wearing a shirt and shorts, and clutching a can of Stella Artois firmly in his right hand, stumbled his way into the auditorium and shuffled his way past me and one other guy to get to his seat. About ten minutes into the movie, he essentially began his own beer-fuelled version of Mystery Science Theatre 3000, shouting at the screen during some intense moments, saying things like “What are you doin’, love?” and “Get on with it, will ya?”. Obviously, me and quite a few other audience members are annoyed by this, but nobody really got up and did anything; again, we were all there to watch a movie, and we didn’t really want to miss much by going outside and telling a staff member about this drunken commentator. Then, about halfway in, the guy just stands up and announces to nobody but himself that the movie sucks, and shuffles past me and the other guy again, only this time tumbling over us as he does so. When he got to the aisle, instead of leaving he just sat down in the middle of it and eventually laid on his side. Then, just as loud as the cinema speakers, snoring could be heard. This guy was clearly so drunk that he fell asleep during his own walkout of a movie he wasn’t enjoying, and spent the rest of it snoring in the aisles, removed only by staff members who were called in after the movie had finally finished.

So now, there’s two reasons I want to see Wildling again; one, to watch it hopefully without the inclusion of a drunk Rifftrax happening within earshot, and two, this is actually a pretty good movie.

The film focuses on Anna (Bel Powley), a young woman who has spent the entirety of her childhood in a room with bars on the window and electricity flowing through the doorknob. The only person she has ever known is a man she calls “Daddy” (Brad Dourif), who keeps her subdued by tales of a ferocious creature called the “Wildling”, as well as injections posing as “medicine” that prevent her from maturing. One day, she is found and freed by local sheriff Ellen Cooper (Liv Tyler), who brings her home to live on a temporary basis with her and her younger brother Ray (Collin Kelly-Sordelet). Anna is introduced to several new concepts such as meat, cars, and teenage debauchery, but a series of bodily abnormalities begin to kick in which lead Anna on a journey to discover her true roots and ultimately embrace the person – or thing – she was always meant to be.

It’s pretty obvious what the “twist” is in this movie, but that’s not what its primary focus is on; it’s much more about this young girl who, after a lifetime of suppression and reclusion, is finally given a chance to stretch out and learn a bit more about who or what she is, and her eventual fight against the very forces that suppressed her to begin with. It adopts an interesting commentary on blossoming into womanhood, and mixes it with a fun creature feature that keeps building and building until it reaches its gruesome climax, all while largely avoiding the pitfalls that come with a fish-out-of-water storyline such as this. For the most part, you’re on board with the character of Anna as she learns more and more about herself and who she should trust over others in this strange new world she finds herself in, and in keeping with the film’s post-feminist ideology she begins to embrace her newfound freedom as well as her true origins.

Bel Powley, who also wowed in another strong coming-of-age story The Diary of a Teenage Girl, is great casting in this because she has a naturally naïve look to her which when used right can be either enchanting or terrifying, and she perfectly encapsulates the character’s wide-eyed innocence and curiosity while also maintaining her ferocity when the script smartly calls for it. She is easily the driving force of this movie, while Brad Dourif – who has had a history of playing memorable on-screen creeps such as Chucky in Child’s Play, Wormtongue in Lord of the Rings and the Gemini Killer in The Exorcist III, to name but a few – brings his usual intimidation to a role that is a bit more fleshed out than the standard horror movie villain; less memorable is Liv Tyler, who doesn’t get a lot to do in a role that really could have been played by anyone (her flat and monotone delivery doesn’t help her much, either).

I also have to give credit to the make-up and effects team, who have done an effective job at bringing the fantastical titular creature to life. For a large chunk of the movie, you barely see the Wildling in all its glory, which is in keeping with the age-old approach to showing only glimpses of the monster before its later full reveal, but thanks to the little things that build up to it like Anna’s teeth falling out and being replaced with sharper fangs, it’s cool seeing the effects team work their magic on-screen like this, leading to a fun creature design that pays homage to similar transformative body horrors in the past like An American Werewolf in London.

If you’re into something that’s a little different when it comes to horror films, this is a fun creature feature to check out – just make sure your screening doesn’t come with its own drunk commentator.

Wildling is a fun and engaging creature feature that neatly blends a coming-of-age story with a transformative monster flick, thanks to solid acting and a strong make-up and effects team that really bring the monster to life.