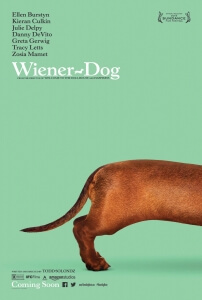 BASICALLY…: A wiener-dog is passed around from owner to owner, becoming a staple in the lives of several dysfunctional people…

We have a sneaking suspicion that writer-director Todd Solondz may need a hug; after tackling the heavy issues of child isolation in Welcome to the Dollhouse, paedophilia in Happiness, abortion in Palindromes and countless others in his filmography, he returns with a film about an adorable little dachshund… and it’s probably one of his most depressing films in ages (not as in “it’s so bad, it’s depressing”; it’s just, well, depressing).

Wiener-Dog follows the titular long-shaped puppy as it is passed from owner to owner, each one more fundamentally damaged than the last. First, it’s adopted by the family of a young cancer survivor (Keaton Nigel Cooke), whose mother (Julie Delpy) takes an instant dislike to the spontaneous adoption, despite her son never being happier around it. The dog then finds its way into the arms of Dawn Wiener, the protagonist from Solondz’s Welcome to the Dollhouse (now played by Greta Gerwig), who soon runs into old high school acquaintance Brandon (Kieran Culkin) and spontaneously joins him on a cross-country trip to see his disabled brother. Later, the dog appears to be owned by Dave Schmerz (Danny DeVito), a disillusioned screenwriting lecturer who’s on the brink of depression as he patiently waits for a callback about his latest script. Finally, the dog is taken in by an elderly woman (Ellen Burstyn) who we see being visited by her self-absorbed granddaughter (Zosia Mamet) who asks for a hefty loan to cover her aggressive boyfriend’s art exhibition.

And out of all these storylines, it’s the one about the young cancer survivor that’s the most uplifting.

All throughout, Solondz presents a shockingly harsh and uncomfortable view of the world, one where hope is only a miniscule glimmer in an otherwise dark tunnel, and everything and everyone is either horrible or seriously misguided in their views. Delpy’s character is subtly monstrous, constantly trying to convince her son that dogs are spiritually inferior to humans and therefore not worthy of our time and affection; Gerwig is an insecure loner who is so desperate for human contact, she goes on a road trip with the guy who once tried to rape her in middle school (seriously, watch Welcome to the Dollhouse; you’ll be pleasantly feeling unpleasant); DeVito is profoundly terrible at his job, alienating his dependent students and faculty member before taking an extremely radical step that could truly endanger people; and Burstyn surrounds herself with people who don’t seem to care at all about her, while she ponders about the life she could have had. Then, after all that, it ends on a couple of extremely mean-spirited shots that just add to the overall uncomfortableness. In that sense, it’s a rather miserable sit, which begs the question whether there’s something deeply troubling about Solondz’s view of the world or, given the amount of terrible things happening in our real-life society over the last number of years, if it’s eerily reflective of the current state of everything lately just going to the dogs (pun well and truly intended).

Does that mean it’s a bad movie? Not at all; in fact, there are several elements about it that truly shine despite all the doom and gloom surrounding it. The actors are all strong, the cinematography can be very nice, there are sprinkles of inspired black comedy spread all across the film (some of them include an impromptu and out-of-nowhere intermission sequence, and a story that Delpy delivers about her own dog that was raped by another dog named Mohammad), and certain sequences and moments can often leave an impression if only for just how strange and off-kilter they are).

However, as a means to find a ray of sunshine and hope in a world that currently doesn’t seem to offer that, this movie will leave you with those negative feelings reinforced and a view of the world that is far bleaker and more depressing than you’d like it to be. Basically, Wiener-Dog is a comedy for manic-depressives; one that appeals best to their own warped sense of what is genuinely light-hearted, when in reality it’s far from what others would call even remotely happy, and once again that reminds them that the world can be a rather awful place to live, even when it’s inhabited by a cute little dachshund such as this one.

Wiener-Dog showcases writer-director Todd Solondz’s ability to take a cutesy premise and turn it into one of the most depressing comedies you’ll see all year, which despite a talented cast and moments of inspired black comedy can’t entirely shake off its uncomfortable and deeply upsetting undertones.