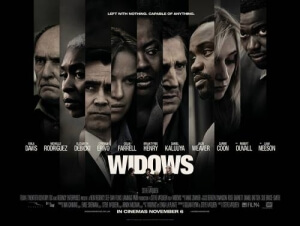 BASICALLY…: After their husbands are killed during a heist, a group of women (Davis, Rodriguez and Debicki) team up to complete the mission and even the score…

This review is of the cut shown at the BFI London Film Festival in October 2018 – the UK release date is currently listed for November 6th 2018.

Steve McQueen is not normally known as a filmmaker that makes films to please audiences; after all, his three previous movies have dealt with heavy topics such as starvation, sex addition and enslavement, which aren’t exactly the most inviting of themes when attracting as big a crowd as you would like (unless they happen to be awards voters, in which case do what you have to do), and sound like they belong in tiny arthouse theatres rather than big multiplexes.

For his fourth movie, however, McQueen may have finally made his first movie that has the potential to draw in quite large audiences – but even then, Widows is not some happy-go-lucky crowd-pleaser by any stretch of the imagination. Instead, his adaptation of the 1983 British miniseries of the same name is a rather bleak and brutally intense crime saga that will either leave you with your stomach overturned, or shaking on the edge of your seat, or both. It is also a very entertaining, superbly shot and extremely well-acted slice of cinema that has commercial promise but also doesn’t sacrifice the level of ambition that McQueen has become known for.

After an intense opening scene that sees a small group of armed robbers try and fail to get away after a job goes wrong, while also cutting back and forth to their very different domestic lives, the film immediately shifts the focus towards the characters who, if the male robbers were the main characters, would have been mere supporting players: their wives, or more specifically their widows. Veronica (Viola Davis), the wife of the fallen gang’s leader Harry (Liam Neeson), is left to grieve for her husband’s loss, burying him next to their son who had been killed several years before, but to make matters worse it appears that Harry and his crew had stolen millions of dollars from local gangster and aspiring councilman Jamal Manning (Brian Tyree Henry), who has come demanding repayment from her. When she comes across one of Harry’s notebooks detailing another planned heist, she enlists some of the gang’s other widows – including Linda (Michelle Rodriguez), who risks losing her store to debtors, and Alice (Elizabeth Debicki), who is coerced into escorting by her mother (Jacki Weaver) as a means to earn money after her husband’s death – to help pull it off so they can settle the score once and for all. It won’t be easy, of course, as they also have to deal with shady politicians, including Jack Mulligan (Colin Farrell) who comes from a family dynasty of aldermen which includes his elderly but still influential father (Robert Duvall), and Jamal’s fierce enforcer brother Jatemme (Get Out’s Daniel Kaluuya) who has his own sadistic way of extracting the information he needs from people.

It’s an intense watch from the first few seconds onwards, as you’re constantly drawn into this hell that these women have been placed in by no fault of their own, left to clean up after their husbands’ collective mess as they always appear to have done. Bit by bit, you also get a feel for how rough and sadistic some of their foes can be, particularly Kaluuya who is utterly terrifying as someone you really want to see get their comeuppance by the end, as well as Brian Tyree Henry who in his first scene with Viola Davis does something that will have all dog-lovers wince with horror. It’s made very clear that this is a harsh and unforgiving world filled with evil that can barely be contained, but McQueen wisely also shows that somewhere within this pitch-black environment, there is a glimmer of hope as these women decide to take control of their rotten narrative and do what nobody expects them to do (“no-one thinks we have the balls to pull this off,” Veronica declares, and she’s right in more ways than one). The more you see what these women have to now go through in reaction to their husbands’ passings, not to mention the fantastic acting that each of them brings to the party – from a stunning Viola Davis who’s never been more commanding of your attention in a movie, to Elizabeth Debicki who has one of the more compelling arcs in the movie and nails it with fearlessness and quiet ferocity – the more you want to see them get away with what they have to do, even though it may come at a great cost to some of them.

McQueen, who co-wrote the screenplay with Gone Girl author and screenwriter Gillian Flynn, gives the film and its narrative a bleak but optimistic feel that resonates well in this post-#MeToo society, and with regular cinematographer Sean Bobbitt gives it a grainy film-stock look that harkens back to the days when The French Connection was similarly making waves with critics and awards voters. He’s also not afraid to get a bit more experimental, even with a bigger budget than usual; there’s a long unbroken shot where characters get into a car, but instead of then cutting to the action inside, the camera just stays on the hood as it drives through the neighbourhood as you hear, but never see, the characters talking. It’s impressive that it not only works at all, but that it also helps the film stylistically stand out from many of the other crime sagas out there, as it offers a different perspective than we’re normally used to seeing, much like the film as a whole. So rarely does it take the routes you’d expect it to take, especially when there’s corrupt politicians playing a part in all of this, and outside of a late reveal which will probably have most audiences split down the middle, there’s nearly nothing conventional to how it all plays out. It is very much a Steve McQueen film through and through, although unlike Hunger, Shame or even 12 Years A Slave this is bound to at the very least draw in a blockbuster-level crowd, if only for the actors who are headlining.

But even those people just coming for Viola Davis and company will get not only that and then some, but also a craftily made and intelligent piece of filmmaking that is bound to boost McQueen’s public profile even more than it already was.

Widows is a bleak but enthralling crime saga that sees Steve McQueen at his most conventional, although he doesn’t let that stop him from bringing an experimental arthouse flavour to the mix, which already includes fantastic acting and stunning filmmaking.