Why Don’t You Just Die! (Review)

Why Don’t You Just Die! (Review) 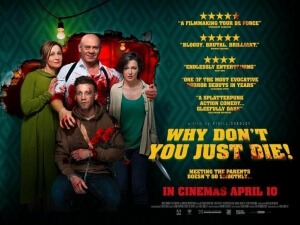 BASICALLY…: Matvey (Kuznetsov) attempts to kill the brutish father (Khaev) of his girlfriend (Kregzhde), only to wander into an even deeper family situation…

As cringeworthy as Meet The Parents is, Ben Stiller had better count himself lucky that Robert De Niro didn’t drill into his leg like it was a slab of meat, blood spraying everywhere to the sound his of piercing screams.

That is exactly the sort of thing to expect in the Russian black comedy Why Don’t You Just Die!, which flips the awkward family drama on its head – and sometimes straight through a wall – and delivers an insanely gory but highly entertaining quirky thriller from its remains.

It starts off simply enough: Matvey (Aleksandr Kuznetsov) arrives at the apartment of police detective Andrey (Vitaliy Khaev), the father of the girl he’s dating, Olya (Evgeniya Kregzhde). His intent, however, isn’t to get to know the man who raised his lover; he is instead brandishing a hammer, eager to kill him after Olya tells Matvey that her father raped her when she was twelve. Once Matvey is invited inside, he meets both Andrey and his put-upon wife Tasha ( Elena Shevchenko) – and that’s when the carnage begins.

To go a little further into some of the plot would be to give away the mystery that’s slowly unfolded for us as it goes along – told in chapters, no less – but make no mistake, there are things that happen later on that are even bloodier than the opening fight sequence. This is a film where some people get the absolute life and soul punched and kicked out of them, while others get shot in the gut with gallons of blood oozing out of their bodies, and of course there’s that whole business with the power drill and making a sieve out of someone’s leg. It is relentlessly gory, kind of like something you’d see in a Sam Peckinpah movie back in the day, but the way that it’s portrayed is very much in keeping with the darkly comedic tone of the whole thing, like an exceptionally bloody Looney Tunes cartoon (it even comes with an endless supply of comedy sound effects, including two rimshots within the exact same scene). There are certain moments of violence where you can’t help but laugh, because the circumstances in which a person (or persons) becomes injured is akin to slapstick you’d see in something like The Three Stooges or Laurel & Hardy, and oddly enough it helps to lighten the mood and put you at some form of ease whilst you’re watching it, something that’s sorely needed when things become too intense during certain conversations.

Because it’s played more for laughs, the violence feels a lot more tongue-in-cheek and not quite so tasteless or exploitative, and it makes the experience of watching it all unfold just a little more enjoyable. This is the feature debut of filmmaker Kirill Sokolov, and it’s an assured first film from someone that knows when exactly to give his audience the sick thrills that they are after, but when to also step back from it and develop the story that is built around this one big scenario. Sokolov introduces new twists, turns and characters about halfway through which make the story a lot more unpredictable, leaving you a lot more curious about how this is all going to come to a head, and makes his stylistic influences very much known from shots which call back to the works of Sergio Leone and especially Quentin Tarantino, whose Reservoir Dogs you could pinpoint as being the main source of inspiration when you find out a little more about what kind of plot it’s got going for it. He also makes effective use of the singular set, draped in old-fashioned wallpaper and anachronistic items such as a bulky analogue television, as it becomes more and more messed up as it goes along, becoming just as battered and bloodied as many of the main characters. He is a filmmaker who definitely knows his stuff when it comes to delivering high-octane thrills like this, and it will be very interesting to see where he goes from here.

It’s a movie not for the faint of heart, or anyone who can’t stand seeing more than a few drops of blood in films, but there’s a lot of entertainment value in watching this, from its sophisticated stabs at dark comedy to a plot that grows and grows the more you look into it. Complete with balls-to-the-wall gore and action, Why Don’t You Just Die! is most certainly a fun film that isn’t going to expire any time soon.

Why Don’t You Just Die! is an unapologetically gory but very entertaining dark comedy which takes heavy inspiration from the likes of Quentin Tarantino and Sam Peckinpah but also brings its own over-the-top style to the mix, complete with balls-to-the-wall gore and action as well as an intriguing plot which leaves you extremely curious how this particular story and its many threads are all going to come to a head.