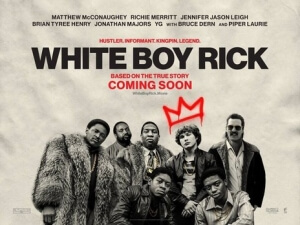 After making a rather big splash with his directorial debut ’71, Yann Demange now focuses his eye for gritty and unforgiving stories on the tale of Richard Wershe Jr., the youngest FBI informant in the bureau’s history at age 14, and how his story didn’t exactly have the happiest of endings.

It’s a noble story of an attempt to achieve the American dream, rich with possibilities that could explore this character’s grimy origins as well as dive deep into who he actually was as a person back then. However, Demange is working from a script that perhaps doesn’t take as many risks or opportunities as it probably should, and although the director makes a decent enough sophomore film you can’t help but think that this movie could have been a lot better if it fixed a number of things to it.

Taking place in 1980s Detroit, young Rick (played by newcomer Richie Merritt) lives a grimy existence with his gun-selling father Richard Wershe Sr. (Matthew McConaughey) and his drug-addicted sister Dawn (Bel Powley), when he is approached by a couple of FBI agents (Jennifer Jason Leigh and Rory Cochrane) who recruit him to go undercover and infiltrate a local gang that’s suspected of dealing drugs. Though for a while he and his father enjoy the hefty rewards that come from his informant role, Rick – now dubbed “White Boy Rick” by the mostly-black gang – soon resorts to more dangerous ways of making a living, which end about as well as you would expect in a film like this.

The film has a very gritty look and feel to it, something that Demange also brought to ’71 four years ago, only here it’s used to tell a pretty rough story about someone who came from a pretty rough area of the country. Demange shoots it like it’s an episode of The Wire, right down to the graffiti-decorated and just plain terrible living conditions some of these people live in, which works to make the city of Detroit a grubby character of its own that’s hard to ignore, and reinforces the grounded nature of this story without necessarily making it too bleak to stomach. He also directs his actors to some of their strongest work in a while, including Matthew McConaughey who steals the entire movie in a great supporting performance that sees the actor turn up the charming scoundrel part of his persona to its absolute maximum, and he just goes all in with a role that doesn’t entirely require him to chew on scenery but just be outlandish enough to be incredibly entertaining to watch. Bel Powley has some really powerful acting moments as well, as a junkie who throughout the course of the film just gets visibly worse and worse, leading up to a scene in a crack house that’s very well acted and even harder to not be emotionally affected by.

Unfortunately, this also leads into one of the biggest problems with White Boy Rick, and unfortunately it’s none other than White Boy Rick himself. This is the very first film role for Richie Merritt, who has never acted in a film prior to this and was hired to play the part after a nationwide casting call, so you have to give him some leeway when talking about his performance, because he’s new to the whole acting game and likely isn’t as savvy to conveying more than one emotion whilst performing. In that regard, Merritt does absolutely fine with what he is given to work with, so none of what follows should be directed at him personally. Rather, the real misgiving is how the character is actually written; Rick is largely a blank slate of a character, one that doesn’t have that much weight to him because he’s portrayed more as someone who just happens to wander into the middle of all this and then just go along with it as otherwise there wouldn’t be a movie. As the movie goes along and bad things start happening to him, you realise that you don’t care as much as you should because this movie has given us very little insight to his character that makes us want to watch a film about him; instead, you’re much more interested in McConaughey’s character, Powley’s character, and even the ones played by other veterans like Bruce Dern and Brian Tyree Henry, because their characters are not only way more interesting but have more defined story arcs than the one that the film is named after. Again, nothing about this is Merritt’s fault – if anything, I’m impressed by him even more that he was able to do as well as he could with such a nothing of a character – but for a film called White Boy Rick, perhaps that very person should have been the most captivating and interesting character instead of almost everyone else around him.

I feel that if this script put a lot more focus on its main character and not as much on the likes of McConaughey (though it’s understandable as to why they did, because of course he’s a bigger draw than the unknown Merritt is), it might have been a stronger movie. As it is, it’s not awful but also noticeably lacking in areas where it seriously should have shone harder, making it kind of a wasted opportunity to tell this potentially fascinating true story on the big screen, and all of that is despite some firm direction by Demange and some solid perfomances by McConaughey and Powley, with special mention going to young Merritt who really seems to have tried to make what little character he was given work as well as he could.

Hopefully, if he decides to continue acting, he’ll find a role that’ll make far better use of his skills.

White Boy Rick is an ambitious attempt to tell the story of young FBI informant Richard Wershe Jr. which features strong direction by Yann Demange and a film-stealing performance by Matthew McConaughey, but is undone by a script that doesn’t take as many chances as it should and gives us a blank slate of a lead character, despite newcomer Richie Merritt’s best efforts.