Where’d You Go, Bernadette (Review) – It’s Only NOW Coming Out In The UK?! 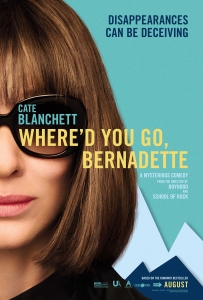 It’s been a long, odd journey for Richard Linklater’s Where’d You Go, Bernadette to reach UK screens. Originally scheduled for a spring 2019 cinema release, the movie – much like the titular character within this movie’s narrative – suddenly disappeared completely from the release schedule, not to be seen since. A US release still went ahead in August of that year, and even scored lead actress Cate Blanchett a Golden Globe nomination during the following awards season, but absolutely no word on whether it would actually reach British shores or not – until now, when it has very quietly been dumped as a VOD release in the middle of a global pandemic (I didn’t even find out this movie had a release at all until mere days before even watching it, let alone hastily writing the preview for it).

At first, my thought was that it’s a shame that a movie by a well-respected, Academy Award-nominated director, and starring an A-list, two-time Oscar-winning actress would be given the shaft in a climate where there isn’t even that much competition. However, upon seeing Where’d You Go, Bernadette at last, it’s easy to see why this was quietly dumped with little fanfare.

A confused, lagging and rather exhausting mess, the film stars Blanchett as Bernadette Fox, a once-renowned architect who now lives a reclusive life in a large, dilapidated house with her husband, tech whiz Elgin (Billy Crudup), and their fifteen-year-old daughter Bee (Emma Nelson). Bernadette, to put it mildly, is a basket case; she’s suffering from crippling anxiety and depression, which has caused her to become manic and quite difficult to handle, both in her home and in her community, represented by frustrated neighbour Audrey (Kristen Wiig). Her mental health eventually becomes so hard to contain – to a point where she unwittingly becomes entangled in a Russian hacking scandal (don’t ask; it’d take too long to explain) – that a stay in a mental facility, as opposed to a planned family trip to Antarctica, is strongly being considered, which causes her to run away and head out on her own Antarctic journey.

If you read that plot summary and figured that the whole disappearing plot forms the main crux of the movie, as the title and the trailer perhaps suggests, you’d be mistaken. Bernadette only goes missing in the final third of the movie, with everything up to that point being nothing more than an uncomfortable examination of a clinically insane person who clearly needs a ton of psychiatric help, but only proceeds to grow more and more unhinged until she finally goes AWOL. It’s hard to know what director and co-writer Linklater had in mind with this film, because for its majority it seems like we are supposed to not only empathise with this rather obnoxious and self-absorbed character, who’s anti-social, refuses to take any responsibility in her life, and is berating of anyone around her who isn’t an immediate family member, but also treat her deteriorating mental condition as a personality quirk instead of the very serious illness that it appears to be. I hear that the book that this movie is adapted from fills in a lot of gaps when it comes to explaining certain motivations and entire backstories (which the movies tries to awkwardly cram in with splices from a YouTube video essay about the character’s career), and it wouldn’t surprise me if I read it and understood a lot more about what was going on than in the film, because it leaves a lot to be desired when it comes to actually explaining why some of the characters here have such unlikeable tendencies.

Thanks to Music, this is hardly the worst on-screen representation of mental disability that I’ve seen recently, but the way that Where’d You Go, Bernadette treats the titular character’s rather concerning conditions as a much thinner rendition of actress Cate Blanchett’s similar turn in Blue Jasmine which she won an Oscar for, it’s still a little alarming. Blanchett, as you might expect, is very good in the film, managing to deliver a solid performance despite the muddled material, but it’s still a narrative that seems wildly unsure of how it wants to view her; either as a victim of her own anxieties and paranoia, or as a conceited eccentric who has a wildly different view of the world. The script doesn’t know which one to pick, and neither does Linklater, often tending to place blame on scenarios and other characters who honestly don’t deserve their share of the blame. Billy Crudup’s Elgin, for instance, is seen by some as an instigator of her wife’s erratic behaviour, including by their rather bratty teenage daughter, because he’s hardly around due to working on a revolutionary piece of tech that can apparently read thoughts, but given how he is clearly trying to make his marriage work despite being on the verge of potentially changing the world, it seems wildly unfair to portray him in a negative light what that’s really not the case.  The film also starts setting up Kristen Wiig’s Audrey as the Karen-esque villain, but when you see how Bernadette is affecting her life in rather destructive ways, you feel far more for Wiig’s character than you do Blanchett’s because while Audrey is being catty about certain things, it doesn’t mean she’s completely wrong.

There are a couple of decent moments which are the closest we come to actually seeing some humanity in some of these characters – a later conversation between Blanchett and Wiig being one of them – and, as previously stated, the acting for the most part is very good, but this is definitely one of the weaker Richard Linklater films in a while. It’s far too confused about how to treat its own protagonist to feel like anything other than a misguided folly, and for something which has only taken until now to officially debut in the UK, it’s not exactly worth the wait.

Where’d You Go, Bernadette is a confused and somewhat misguided film that largely fails to grasp the lead character’s deteriorating mental health and portray it in a meaningful, empathetic way, which despite strong turns from the likes of Cate Blanchett feels extremely disjointed and disappointingly half-hearted on the part of director and co-writer Richard Linklater.

Where’d You Go, Bernadette is out now to rent or buy on digital platforms, including Amazon Prime Video.