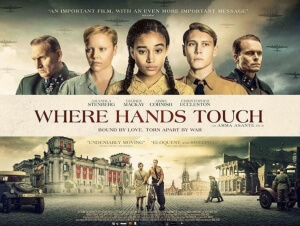 Writer-director Amma Asante originally planned for this movie, the wartime romance Where Hands Touch, to be her second feature following her debut film A Way of Life; however, when financing for it fell through, she went on to make both Belle and A United Kingdom instead, and it was only after the critical success of those movies that she was finally given enough resources to make it.

It’s certainly a passion project for the former actress turned filmmaker, but the irony now is that the movie she had originally hoped to make and finally did is nowhere even close to the quality of the movies she actually did make in its stead. It is sadly a somewhat flat drama which doesn’t do as much as it thinks with its interesting ideas and instead wastes them on a bland romance that never quite takes off.

Set in 1944 Germany, Leyna (Amandla Stenberg) is a mixed-race teenager who’s the daughter of an absent African man and a white German woman (Abbie Cornish, who looks like she got her overall look from Game of Thrones’ Brienne of Tarth throughout the whole movie). Obviously, seeing how this is Germany in the early 1940s, it’s not an especially easy time for her; despite her proclamations that she is a proud German like everyone else, she is discriminated by the Nazis and her fellow Germans for the colour of her skin and her mixed-race heritage – all except for teenage Hitler Youth member Lutz (George Mackay), who takes a liking to her and soon sparks something of a romance with her, even though he is the son of high-ranking Nazi officer Heinz (Christopher Eccleston). Inevitably, the forces of war and Nazi discrimination pull them apart, and soon both of them – Leyna especially – are left to fight for their survival in an environment designed to exterminate all that isn’t pure Aryan blood.

It’s a very interesting idea to explore what it must have been like to be a person of colour living in one of the most hateful places in the world at the time, and you can see the roots of it forming in one of Asante’s previous features Belle (which also dealt with a mixed-race protagonist that grows up in a rather alien but no less discriminatory environment), but it adopts such a generic narrative template that the intriguing approach often tends to get lost in the numerous clichés it surrounds itself with. For the film’s first half, they come thick and fast with predictable dialogue and blank-slate characters to enact them out, including a romance plot that you’ve seen done much better in other movies set around this time; the two leads, try as they might, don’t share a believable chemistry with each other – not quite Anakin and Padmé levels of awkward, but close enough to notice – and for a lot of the time it feels like these characters are only together because then there’d be no drama. Most disappointing of all, the lead character of Leyla who should be the most interesting person in the entire thing is a rather dull character that not even an accomplished actress like Amandla Stenberg could bring to life; during the first half, she more often than not becomes a background character while performances from Abbie Cornish and Christopher Eccleston take centre stage, and you get the feeling that a lot more time could and should have been spent on exploring her own perspective on her pretty difficult life, rather than letting the white people do all the talking for her.

The film does pick up slightly in the second half, which sees the character forced into a pretty dire situation – seeing how this is Nazi Germany we’re talking about, you can probably piece together what that may be – and forced to survive under extremely harsh circumstances. Asante brings a strong sense of doom and gloom into these scenes, with the feelings of death and despair all over the place in the ugly grey colour scheme and barren, muddy landscapes, and in later moments where the drama gets a lot heaver – to a point to where even the romantic leads have genuine weight to their connection – it can be genuinely heartbreaking. It kind of made me a little annoyed that Asante only waited until the halfway point to finally spring some life into this movie, because everything leading up to it was very pedestrian and generically bland which I’ve seen this director do much better than in some of her past movies; since she did write this movie before either Belle or A United Kingdom, you have to wonder if she went back and revisited this script after the successes of both films, or if she left it as is and used whatever draft she did last as the shooting script, because either way it’s nowhere near as strong or powerful as those other films in terms of emotion, drama and character.

It’s frustrating because you want to be interested in this story, seeing how it’s one we’ve not seen a whole lot of in historical movies about Nazi Germany, but it’s so bogged down by generic plotting and clichéd dialogue that its novelty is entirely lost upon you, as you’re left watching a story you’ve seen many times over with characters who aren’t interesting enough to care about. I do appreciate that Asante had wanted to make this movie for years, and it’s great that she was finally able to make it after going through one complication after another, but in the end it’s not as good as it probably should have been; it’s mostly just a bland wartime romance where not even the romance is compelling, and given Asante’s recent track record it’s an unfortunate disappointment next to her more impressive fare.

Where Hands Touch doesn’t do nearly quite as much with its intriguing ideas as it probably should have done, instead adopting a generic and clichéd narrative with a bland romantic plot that not even the actors can make compelling, which overall makes it an unfortunate disappointment for writer-director Amma Asante.

Check out Where Hands Touch showtimes in London
on Walloh.