What They Had (Review)

What They Had (Review) 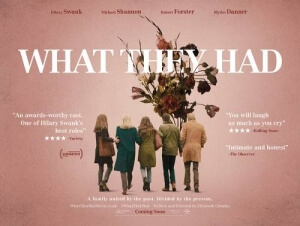 BASICALLY…: Bridget (Swank) returns to her family home so she can help her family deal with her mother’s (Danner) Alzheimer’s and her father’s (Forster) reluctance to move on…

Fair warning to anyone who has had, or currently has, a relative that suffers or has suffered from Alzheimer’s or any other form of dementia; you areprobably going to come out of What They Had with a heavy heart and a sucker-punched gut.

As someone who has seen their grandfather succumb to Lewy Body Disease and is currently witnessing the serious mental decline of their grandmother unfold as I type this, I went into this movie expecting a very heavy look at the subject while also finding a meaningful way to discuss it without mocking its seriousness; for me, while this movie wasn’t quite as effective as I thought it would be, I was still rather surprised by the genuine and often (intentionally) uncomfortable tone it was aiming for, which helps ease the pain when it comes to actually having a reasonable conversation about the subject.

The film begins as elderly Ruth (Blythe Danner) gets up in the middle of the night and wanders out into the freezing snow; this causes her husband Norbert (Robert Forster) to call his son Nicky (Michael Shannon), who in turn calls his sister Bridget (Hilary Swank) who flies in from California with her daughter Emma (Taissa Farmiga), to help find her. She is eventually found, but Nicky is determined to finally convince Norbert to put her in a facility where she can be properly looked after; the problem is, Norbert is extremely reluctant to relinquish his grasp over his wife of many years, and his fierce stubbornness puts both Nicky and especially Bridget in an increasingly awkward position, with the latter also coping with unhappiness in her own marriage and her strained relationship with her daughter. The family must try and find a way to compromise if they are to ensure Ruth gets the best care she is entitled to, but as her Alzheimer’s becomes even more unsustainable a choice must be made sooner rather than later.

The movie is written and directed by Elizabeth Chomko, whose script for this film was submitted as part of the Nicholl Fellowships in Screenwriting program as administered by the Academy of Motion Picture Arts and Sciences; hers is only the fourth such script since 2010 to actually get produced (another of them, the Ted Bundy biopic Extremely Wicked, Shockingly Evil and Vile, is due for a Netflix release later this year), and it’s clear to see why her story was deemed to be worth telling on the big screen out of all the others. It’s a very humanising portrait of a family going through a rather severe crisis, one that’s both hostile as any awkward family gathering but also genuine and even touching without becoming too schmaltzy, and the performances across the board are among the strongest that some of these actors have given in years; Hilary Swank, an actress I’ve never really been all that fond of, has some truly powerful scenes opposite an equally-strong Taissa Farmiga, and Blythe Danner handles her extremely difficult role gracefully, never once turning her Ruth into a one-note walking cliché. The movie, however, is co-owned by Michael Shannon and Robert Forster; the former knocks it out of the park as the smarmy and dickhead older brother who’s clearly frustrated by the situation and can hardly keep it contained any longer, while Forster is commanding in his stubbornness here, at once extremely difficult to side with because he’s being kind of a monster by denying his wife’s deteriorating mental health when she is clearly in desperate need of help, but also sympathetic as you can understand why he is this way.

Together, this cast easily makes this worthwhile, even when the film doesn’t always come to life as much as their performances. Chomko’s direction in both the script and on set seems to be as though she is aiming for a Richard Linklater type of tone, which makes sense as the performances and the dialogue do come across very naturally, but soon it reaches a point where you’re not entirely sure what to be feeling in some of these scenes. There are parts that feel almost like a farce – such as one sequence where Swank’s character invites the nice handyman over to fix the locks and possibly be seduced, only for events to turn out how they would on an episode of Fawlty Towers, except played alarmingly straight – where again, you’re not sure whether to laugh at the awkwardness, or cringe from it until your face muscles start to ache. The way that these events play out is very much like how they would in a more conventional family drama, especially as it approaches the end, which kind of goes against the more realistic and grounded tone that this movie starts out with and isn’t entirely convincing as a satisfying conclusion. I felt a little disconnected from the film as a result, even though it’s handling these very delicate themes of dementia and the ensuing family fallout over it rather well, which is especially disappointing because, as I mentioned earlier, I know what it’s like to have a family member who’s going through a rough path of Alzheimer’s. I was hoping that this film would be a bit more stuck together before deciding to go the extra mile in talking about a very sensitive subject matter, but the film is still acted very well and the writing, for the most part, is serviceable that I thought it was an effective, though not deeply gut-punching, movie that talks about it.

But how it is for me is not necessarily the same as you or anyone else; if you want to be deeply affected by a movie that talks about the realities of dementia, then you will probably get more of an emotional reaction out of What They Had than I did, and I can certainly understand if that’s the case. I do, however, wish that the movie was a little stronger than it ended up being.

What They Had is a quietly moving and exceptionally acted family drama that deals with the difficult topic of dementia with a thoughtful, though not entirely solid, approach that makes the difference.