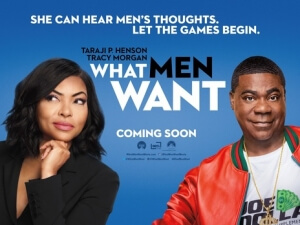 BASICALLY…: After a knock to the head, sports agent Ali (Henson) suddenly finds herself with the ability to hear the inner thoughts of men…

On paper, a gender-swapped remake of Nancy Meyers’ hit rom-com What Women Want seems like a really interesting idea; the original premise of a man suddenly gaining the ability to hear women’s inner thoughts is long due for a feminist update, especially in a post-#MeToo climate when conversations about sexual harassment and gender-based discrimination are becoming more mainstream, and if done right it could actually prove a new, even fascinating, insight into the battle of the sexes in this day and age.

Unfortunately, What Men Want doesn’t do much if anything at all with this premise other than aim for low-brow raunchy humour, and the whole thing feels like a huge missed opportunity as a sad result.

In this version of the story, Taraji P. Henson plays the Mel Gibson role; she’s a sports agent at a boys-club agency in Atlanta, where despite her strong efforts to fit in with the guys she is usually overlooked for new clients and new partnerships in favour of her male colleagues. Fed up with being unable to succeed in a man’s world, she lets her sorrows drown during her friend’s bachelorette party, during which she is given some drugged tea by a psychic – as you do – and bangs her head whilst in the club. This is where she, of course, gains the power to hear the thoughts of men, and with the aid of her assistant Brandon (Josh Brener) she decides to use it to her advantage by attempting to sign rising basketball player Jamal (Shane Paul McGhie), and even score a potential partner in handsome single dad Will (Aldis Hodge).

It’s no less realistic than Mel Gibson gaining the ability by being electrocuted in the bathtub by a hairdryer whilst surrounded by various feminine hygiene products – and yes, that’s how it actually happened in the original – and to its credit this movie is more aware of how silly its own premise is, so it respectfully goes a bit further out there with some of the gags and raunchy adult jokes, knowing full well that it’s already working with some very ridiculous material. It also has the benefit of having an incredibly entertaining Taraji P. Henson in the lead role, who pushes herself to the limit in an extremely physical comedic performance that’s as loud and over-the-top as a premise like this requires, and quality of the rest of the movie aside she is so energetic and entertaining in this role that it’s almost worth seeing just to get a glimpse of her wild energy during this film.

Those, however, are really the only few high points I can note about this film, which I otherwise found to be a rather grinding experience. Keep in mind, when I saw this movie I was not in the best mental shape, having not gotten much sleep over the weekend due to various things going on and so my brain circuits were starting to fry like an egg; seeing this movie go from one loud obnoxious joke to another, coupled with an audience who was clearly enjoying this movie more than I was, certainly didn’t help my growing headache, and by the time it reached the third act I was just about ready for this movie to be over with, if only so I could finally go and get some much-needed sleep. This is not the kind of movie you want to watch if you’re in a similar situation, especially if you’re fighting off tiredness and a growing need of paracetamol for your headache, because you’ll just be more annoyed that you’re watching a movie that doesn’t have many good jokes, has a plot which doesn’t make a lot of sense – even in one that’s already meant to be very silly – and has characters that you really don’t care all that much about, instead of actually getting some sleep like you should be doing instead.

I doubt that if I saw this movie again (which I’m not going to do) with a more awake attitude, I’d be a bit warmer to it and not be so cranky and tired during it; I just don’t remember it being especially funny or fresh enough to come back to, which obviously isn’t a good thing but even less so when you really start to think about all the ways in which it could have, and should have, worked. As I said earlier, swapping the genders in the plot to What Women Want is a really interesting idea, and if the writers were smart enough they could have crafted a gripping and all too timely commentary on the sad state of gender politics in the workplace; instead, the movie focuses mainly on crude sex gags and dropping the f-bomb into every other sentence, basically doing nothing with the material other than just making it a very raunchy comedy. They don’t even do a whole lot with the mind-reading aspect of the plot, as they tend to pick and choose when it comes into effect so it can alter the course of the story, and there are long stretches of this film where the power is never even used, which makes it an afterthought in a movie built almost entirely around this one premise. It’s more of an extended gag reel than anything meaningful, with comedic actors like Tracy Morgan and Pete Davidson showing up as characters that are basically themselves to just riff for five or so minutes just to bring it to nearly two hours, and once again adding nothing to a plot that should have had tons of interesting new material added by this point.

The whole thing can’t get rid of the feeling that so much more could have been done with this premise, and what they did do with it is so painstakingly safe and by-the-numbers that it’s not worth tracking down.

What Men Want fails to grasp the numerous opportunities that come from swapping out the genders in this reimagined premise from Nancy Meyers’ What Women Want, despite an extremely committed and entertaining lead comedic performance by Taraji P. Henson.