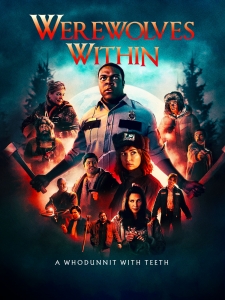 BASICALLY…: When a mysterious creature begins attacking a town, the citizens must determine its true human identity…

It seems that Ubisoft didn’t wait around to cash in on their hit deduction VR video game Werewolves Within, because not even five years after its debut there’s already a film adaptation based on it. Normally, you’d have to wait until there’s at least a few more entries in a game franchise before a movie version even becomes a possibility – for reference, it took six years and seven titles in the Resident Evil game series for the eventual movie version to come out in 2002 – so props to Ubisoft for deciding to licence out their relatively new title to filmmakers right off the bat.

The movie itself is, as far as video game adaptations go, not a bad effort; opting for a horror-comedy hybrid, with the tone and feel of an Agatha Christie murder-mystery, director Josh Ruben’s Werewolves Within is a mostly entertaining ride that’s easy to like and even easier to watch – most of the time.

In a slight departure from the actual game, which was set in a medieval fantasy realm, the film grounds itself by taking place in the (apparently) normal snowy mountain community of Beaverfield, where new forest ranger Finn (Sam Richardson) arrives after being reassigned from his previous post. He is quickly introduced to the oddball residents of Beaverfield, including chirpy mail-person Cecily (Milana Vayntrub), uber-conservative couple Pete (Michael Chernus) and Trisha (Michaela Watkins), gay hipsters Joaquim (Harvey Guillén) and Devon (Cheyenne Jackson), and energy bigwig Sam (Wayne Duvall) who’s in charge of the town’s controversial fracking pipeline. Very soon, a snowstorm forces everyone to barricade in fellow resident Jeanine’s (Catherine Curtin) residential lodge, but what’s really got everyone concerned is the mysterious large animal that has begin picking off residents one at a time, which brings out a sense of paranoia and fear in the easily startled citizens. It’s now up to Finn to try and keep the peace, but most importantly stop everyone from blaming and killing each other long before the creature – theorised to be a werewolf – even shows up.

Like the game it’s based on, Werewolves Within is a whodunnit based on simple deduction. Subconsciously, you’re already narrowing down who the likely culprit is as soon as you meet these larger-than-life characters, and as more and more people start getting offed, it becomes ever clearer who the real enemy is. Admittedly, it was very easy for me to guess who it was, because the film follows a familiar structure that gives certain people more screen-time over others, which from past experiences often means that they are more important to the overall story than some of the additional players. That does make the overall mystery rather predictable and not all that surprising, but the film does have extra tricks up its sleeve to still hold your attention long past you’ve solved the puzzle long before the characters do.

For one, the movie has a very strong sense of humour. Both director Josh Ruben and writer Mishna Wolff (ahem) have plenty of fun pitting these heavily flawed people against each other, with Wolff’s witty dialogue acutely delivered by a slew of comedically-gifted actors who nail most of the timing and quickened Edgar Wright-style pacing of their jokes, while much darker moments and scenes of bloody violence also getting uneasy laughs as though it’s a lighter-hearted Coen Brothers movie. The film also has plenty of enjoyable characters, including a very likeable Sam Richardson who does a good straight-man act opposite some of the very eccentric caricatures, which involves poking fun at conservative and liberal stereotypes across the board, such as the gun-toting and very Trumpian Pete and Trisha, and the woke West Coast-native same-sex couple who get offended by the slightest of outdated phrases.

The film is probably more entertaining when it’s primarily fixated on delivering its comedy and focusing on these characters, because when it shifts back into mystery mode, the enjoyment factor begins to die back down. Again, it’s a very easy movie to forecast what’s going to happen, because its element of deduction and the way that certain pieces of information are delivered might as well point arrows toward who the killer is, and you’re just left there to wait until it finally reveals its hand. There is enough of a good time to be had with how the movie paces itself and how fun and likeable most of the characters are, but Werewolves Within just barely misses the mark when it comes to actually being a suspenseful and genuinely thrilling mystery.

Other than that, it’s a fine enough movie to bite into.

Werewolves Within is a fairly entertaining comedy-horror that boasts a strong sense of humour and some fun characters, but when it frequently switches into mystery mode things become a lot more predictable and not quite as absorbing as it could have been.

Werewolves Within is now available to rent or buy on digital platforms, including Amazon Prime Video.