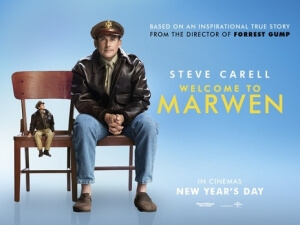 BASICALLY…: After a brutal assault that leaves him with brain damage, Mark Hogancamp (Carell) tries to regain his memories by constructing a miniature World War II town populated with dolls…

The story that inspired Robert Zemeckis’ new film Welcome To Marwen is far more fascinating than the movie itself; in the early 2000s, artist Mark Hogancamp was brutally assaulted by a group of neo-Nazi thugs, after he told them that he enjoys wearing high heels. The attack left him with severe brain damage, which erased all of his memories leading up to the incident and impaired his ability to draw and write, scarring him for life both mentally and physically. To cope with his trauma, he ended up building a miniature World War II-era Belgian town in his garden (as you do) and populated it with action figurines that resembled himself, his friends, and even the Nazis that attacked him (as you also do), creating a series of photographic artwork that earned him a great deal of attention.

It’s one hell of a story, and you can see why Zemeckis was so attracted to its potential; unfortunately, despite its ambition his film never becomes as compelling as it really should be, especially when there’s another film about this subject matter that handles it way better. The award-winning 2010 documentary Marwencol – released in the UK as Village of the Dolls – really dives into the imagination within Hogancamp’s fractured psyche, as well as the real emotional weight that comes with his incredibly tragic situation, without sugar-coating a lot of its content or holding back on the severity of the mental issues that arose from his traumatic experience. That is a trap that Zemeckis’ Welcome To Marwen has fallen into, one that ends up making the final product so saccharine and manipulative that it feels way more artificial than the dolls that populate Hogancamp’s miniature town.

The film sees Hogancamp (portrayed by Steve Carell) deal with all the aforementioned stuff as well as constructing the world of Marwen, seen very regularly in CGI-filled segments where the dolls come to life and operate within numerous action scenarios that involve heavy gunfire against the Nazis and the exclusively female population that resides in the town and even a green-haired witch (Diane Kruger) that acts as a very obvious metaphor for Hogancamp’s addiction to his medication. The film’s stakes involve him fighting the fear of attending his attackers’ sentencing in court, and trying to win the affection of his nice new neighbour Nicol (Leslie Mann); needless to say, the stakes aren’t incredibly high here, but the film soldiers through regardless, despite being about as corny and over-simplified as Hollywood can get.

With this film, Zemeckis has given Hogancamp’s story the Patch Adams treatment, and if you’ve seen that movie and know anything about its subject matter then you’ll know that’s not necessarily a good thing. The movie sieves the material down to such a basic and condescending level that you never fully appreciate this guy’s ordeal as much as you should, because it feels so phony and unrealistic to a point to where you don’t care about any of it, which is the very worst thing a movie based on reality should do. The intentions are certainly good, but the story and characters are written so artificially that they never come across as genuine; we barely understand why the women in his life – including local hobby shop owner Roberta (Merritt Wever) and co-worker Caralala (Eiza González) – are so important that he has constructed doll avatars of them to serve as protectors of the town. Many of these women, such as Mark’s Russian caretaker Anna (Gwendoline Christie) and his friend from physical rehab Julie (Janelle Monáe), only have one scene in real form during the entire movie and even then it’s not enough to know why they mean so much to him, and for all of the film’s talk about how women are so strong and mighty, the irony seems lost on the film that barely any of the female dolls don’t even have much in terms of meaningful dialogue.

The women that it does focus on, though, is where the film’s alarming misguidance creeps in, especially when it comes to Mann’s character. Although the audience understands the context behind Hogancamp’s eccentric mannerisms, her character doesn’t, and when you have scenes where Mark is showing her pictures of the doll she crafted that’s very similar-looking to her, in romantic scenarios with his doll avatar, you’re left utterly baffled as to why she would find any of this charming and not in the least bit creepy. The film continues with this awkward romantic plot until it reaches a mercifully natural conclusion, but it still manages to undermine the very nature of Hogancamp as it makes him seem like a serial killer in the making, as opposed to the simple-minded gentleman that he probably is in real life.

Its bizarre tone and misguided handlings on feminism and mental illness aside, the film does have a few notable qualities to it. As much as the script doesn’t really give them much to work with, these actors really are trying; Steve Carell is actually very good in this, and if he was given a more focused script then I think it could have been a truly standout performance. The visual effects, which come into play whenever we transition into the fantasy world of Marwen, are also not that bad, with the dolls’ textures and uncanny valley appearance really shining through a lot of the sillier moments in this scene (just wait until the movie introduces a time machine which, given that this is a Robert Zemeckis movie, should not surprise you as to what form said machine takes, in one of the most eye-rolling in-jokes of the film).

Unfortunately, they’re not enough to save a film that aims high, but never reaches its intended target.

Welcome To Marwen is a misguided dramatization of a fascinating real-life story which simplified things to such a basic and awkward level that the final product feels as fake and artificial as the dolls in this miniature village.