We Can Be Heroes (Review)

We Can Be Heroes (Review) 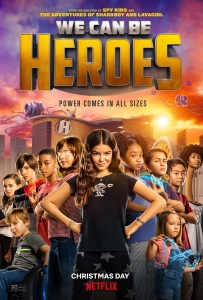 BASICALLY…: When the world’s greatest superheroes are kidnapped by aliens, their children band together to save the day…

Robert Rodriguez, the filmmaker behind such bad-ass action flicks like Desperado, From Dusk Till Dawn, Sin City and Alita: Battle Angel, has a very weird approach to his more kid-friendly movies. Whether it’s one of the four Spy Kids movies, the little-seen Shorts, and perhaps most notoriously The Adventures of Sharkboy and Lavagirl, he infuses an awkward mix of juvenile humour and heavy visual effects in a story that feels as though actual children wrote the script in a creative writing class at junior school.

It’s like Rodriguez is a different person behind the camera on one of these films; seriously, would you ever assume that the guy who directed scenes set in vampire strip clubs, and once had Bruce Willis rip the gonads off a yellow child molester, also made a movie where a young boy is visited by his two imaginary superheroes, one of them played by a young Taylor Lautner? Or how about one where a retired young spy is thrust into a 3D computer game with horrifically rendered CGI to defeat an evil Sylvester Stallone? Or even whatever the hell Shorts was all about?

There’s no doubt that Rodriguez’s kids movies are just as insane as his more grown-up movies, and his latest foray into family filmmaking We Can Be Heroes – a semi-sequel to The Adventures of Sharkboy and Lavagirl, only in the sense that both show up here as supporting characters – is pretty much exactly what you think it’s going to be. Although, this will probably be forgotten a lot quicker than some of the others.

The film takes place in a world where the renowned superhero team known as the Heroics – a collection of superpowered individuals so one-note and bland that you’re praying for the Vought Corporation from The Boys to take them onboard and give them a much-needed publicity boost – fight crime and save civilians, but one day they are captured by an invading alien force and placed on board their mother ship. In response, the government rounds up the heroes’ young children – almost all of whom have inherited their own powers – and places them in a safe, secure facility for their own protection. While most of the kids have superpowers that range from running in slow-motion to being able to levitate objects by singing to predicting the future in drawings, the only one without a superpower is Missy Moreno (YaYa Gosselin), the daughter of Heroics member Marcus Moreno (a woefully underused Pedro Pascal). She soon leads the others in an escape from the facility and on a mission to rescue their parents and stop the aliens from unleashing a force intended on taking over the planet.

It’s hard to even figure out what to really say about this movie, because there aren’t that many memorable qualities to it; at least, in comparison to something like The Adventures of Sharkboy and Lavagirl. That movie at least had some seriously far-out weirdness in its visuals and overall ideas that made it fascinating to dissect, whereas We Can Be Heroes simply goes through the motions of a sub-par family superhero movie, with the same excessive amount of questionable CGI and over-the-top performances (especially Priyanka Chopra who goes full pantomime villain here) that you’d find in any one of his other kid-centric movies. It feels distinguishably unambitious on a filmmaking level, with the static cinematography and a good chunk of the child performances making this feel as if it were an X-Men movie in the same universe as Playing With Fire, with an incredibly predictable story that even the youngest of viewers can easily figure out, and characters who you feel hardly anything for because they’re so underdeveloped. Even the CGI, as unintentionally freaky as it can get sometimes – one of the kids possesses a power to morph his face into any shape, and it looks terrifying every single time we see him do it – isn’t worth calling to attention because it’s so unremarkable that it doesn’t even warrant a description, let alone a critique.

If Rodriguez had spent a little more time on the script, this easily could have been a Goonies-style kids’ adventure with superpowers, because the idea of the movie itself, while not especially original, does offer that intriguing possibility. Instead, it’s just the latest in a long line of his strange, nonsensical family movies that all just seem to blend together nowadays, and it doesn’t even have the distinction of being too weird to stand out like some of the others. It is what it is, and if you have the stomach for these kinds of movies then you’ll probably tolerate this one just fine, but if you’re a hardcore Robert Rodriguez fan looking for the director’s next big bad-ass action outing, then keep holding out hope that a sequel to Alita: Battle Angel might one day happen.

We Can Be Heroes is a largely forgettable family movie from filmmaker Robert Rodriguez which contains numerous elements from his previous kids movies such as the excessive and occasionally freaky CGI and the nonsensical plotting, but executes them in far less interesting ways.

We Can Be Heroes is now available on Netflix.