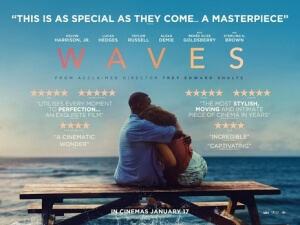 BASICALLY…: A family in Miami is torn apart in the wake of an unexpected tragedy…

This week sees the UK release of Terrence Malick’s latest film A Hidden Life, a movie that I unfortunately won’t be able to review for this site because it isn’t playing anywhere near me, and I neither have the time nor the willpower to travel in order to see the three-hour historical epic (especially after having to sit through Malick’s dire previous film Song to Song).

Luckily, I was able to see Waves, which I have no doubt is the far better Malick movie out this week, even though Malick himself has nothing to do with the actual making of it. There is a significant connection, however, to the famously elusive experimental filmmaker; writer-director Trey Edward Shults, who has recently come into his own as a competent filmmaker with Krisha and It Comes At Night, worked as a film loader and intern on some of Malick’s most recent movies, including the Oscar-nominated The Tree of Life, and it seems that Shults has been heavily influenced by Malick’s style and unconventional approach to storytelling enough to translate them into his own methods. He also has one thing that Malick appears to lack, and that’s a sense of focus, albeit in some very unexpected ways that make Waves a rather fascinating film to see and talk about.

The crux of the story revolves around an upper-middle-class family living in Miami, with a specific focus on the eldest son Tyler (Kelvin Harrison Jr.), a star wrestling athlete at high school who appears to have it all; popularity, talent, and a beautiful girlfriend named Alexis (Alexa Demie). However, he also has to contend with his stern father Ronald (Sterling K. Brown) who is constantly pushing Tyler to be the very best version of himself, and as a series of unexpected events start to overwhelm him, Tyler experiences a devastating breakdown, leading to an extremely tragic outcome.

It is at this point, intriguingly, when the focus shifts almost entirely to Tyler’s younger sister Emily (Taylor Russell), who now deals with the fallout following said tragic event, as well as the damaging effect it is having on her parents. She starts to find solace in sweet-natured Luke (Lucas Hedges), and the rest of the film deals with Emily’s struggle to find peace in the wake of that defining mid-point moment. This somewhat abrupt shift in focus has been called to attention by a few critics, who seem to have been taken aback by the fact that it seems to be two films in one, with the latter half being significantly calmer in comparison to the ticking time-bomb nature of the first half. In a way, this odd narrative structure makes sense; the movie is all about the need for compassion in any sort of relationship, whether it be family or lover or friend, and by showing back-to-back two very different examples of how a lack of it it can destroy a person’s self-esteem versus how it can bring about a sense of peace in another’s life, it manages to send a powerful message about humanity being both a product of what we are brought up with, and what we ourselves make of it. By having Waves be essentially a movie of two halves, Shults gets his point across easily and wholeheartedly, rather than just focus on one aspect of it and leave the other one in the lurch. It’s an effective approach that makes it a much more emotional experience, because we really are seeing these themes portrayed from different angles and, more importantly, we understand both of them.

Shults certainly lets his inner Malick show with camerawork and editing tricks that are just as ambitious as the narrative structure. The cinematography, dazzlingly captured by Drew Daniels, drenches itself in colourful hazes and stylish neon lighting, and incorporates tricksy shots such as a camera rotation inside a moving car, which is very well executed if slightly overused. Much like he did with It Comes At Night, Shults also plays around a lot with different aspect ratios; it will suddenly switch from standard 1.85:1 widescreen to the more boxed-in 1.33:1 or the super-thin 2.35:1 for certain extended sequences, which at first takes you out of the movie a little bit but it does start to feel a lot more subtle in its transitions as it goes along. It’s a very stylised movie, but it also has the emotional range and depth to support it as something of substance, too; the actors certainly add to that, with standout turns by Kelvin Harrison Jr., Taylor Russell and Sterling K. Brown who have some very powerful moments where they really get to show all sorts of sides to their very different characters.

Some will not exactly warm to the stylistic choices made here, but once you look past its unconventional approach then there is a rich and emotional drama to get sucked into, complete with some dazzling cinematography, strong performances, and a quietly menacing musical score from Trent Reznor and Atticus Ross which carefully incorporates rap lyrics to help tell the story. It’s a very well-crafted film that certainly won’t be to everyone’s tastes, but is sure to stick around for a little while longer than you may have anticipated.

Waves adopts an unconventional narrative structure that might put some people off, but once that is overlooked viewers will be rewarded with a rich, emotional and superbly made family drama complete with strong direction from Trey Edward Shults, dazzling cinematography by Drew Daniels, and a great line of performances from the likes of Kelvin Harrison Jr., Taylor Russell, Lucas Hedges and Sterling K. Brown.

Want to decide what the movie’s like for yourself?
Check out Waves showtimes in London
via