War on Everyone (Review)

War on Everyone (Review) 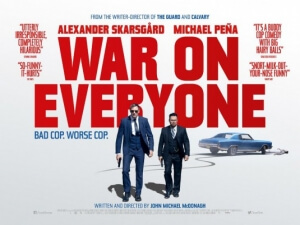 BASICALLY…: A couple of corrupt police detectives (Skarsgård and Peña) set out to blackmail and intimidate any criminal they can find…

John Michael McDonagh, the director of The Guard and My Favourite Film of 2014© Calvary, is back with his first film set on American soil after his two previous Ireland-set films, and given that America is a considerably more bat-shit environment than Ireland, expect nothing less than pure balls-to-the-wall gun-toting insanity from War on Everyone.

In this one, we follow two police detectives, Terry Monroe (Alexander Skarsgård) and Bob Bolaño (Michael Peña), who go about their business in Albuquerque, New Mexico. However, right from the opening few scenes – one of which solves the age-old riddle of whether a mime would make a sound if you hit it with a car – it’s obvious that these two guys have seriously warped views of the world, and not only are they crooked and corrupt as holy hell, but they are having the absolute time of their lives whilst doing the illegal stuff they’re doing, whether it be assaulting anyone they don’t like, or doing drugs with an informant they’re blackmailing. Their crusade of unlawful justice reaches a head, however, when they antagonise a smarmy and sinister British gangster (Theo James), who seems to be behind a massive crime that the detectives couldn’t care less about actually solving, but rather wanting the hefty sum of money involved for themselves.

Although it shares similar themes with The Guard more than Calvary, War on Everyone is a far different film than either of them, yet at the same time it retains the high-functioning nature of both. Throughout the movie, there are numerous conversations where the two main characters swap philosophical ponderings with each other, sometimes while they’re partaking in some seriously illegal activities that would otherwise get them suspended. I hesitate to think that McDonagh puts this kind of dialogue into his films to gain appraisal from a more niche crowd, mostly because I don’t think that at all, but oddly enough it doesn’t come off as pretentious or pandering, especially when the rest of the film clearly has a much lighter tone, albeit peppered with some incredibly dark humour.

These conversations, which very nearly outstay their welcome but not quite, are surrounded by several instances of witty dialogue, quirky characters, and a whole lot of over-the-top violence which only someone who has watched a whole lot of Shane Black movies – as well as Werner Herzog’s Bad Lieutenant: Port of Call New Orleans for good measure – would put into their screenplay. It’s really odd when the two corrupt American cops played by a Swede and a Latino are probably the least strange characters in the movie; there’s a black Muslim convert (Malcolm Barrett) who we later has a bit of a thing for transsexuals, an Irish informant (David Wilmot, the only McDonagh regular to show up in this film) who claims to have a number of things from dyslexia to Multiple Sclerosis, and perhaps the most bizarre of all, a strip joint owner (Caleb Landry Jones) whose tics and mannerisms upon a distance just screams “red flag” to any passing-by strangers, so it should come as no surprise that he’s in cahoots with the main bad guy. There’s a lot of odd people about in this film, but McDonagh makes them all entertaining and not so much endearing, but more fun to be around than some of the other odd folk out there.

Of course, it being a pitch-black comedy first and foremost, it gets some seriously pitch-black laughs from all the right places. The double-act of Skarsgård and Peña paves the way for some hilarious back-and-forths, whether it be philosophically so or if they’re just giving other people crap, but they’re having so much fun being these major douchebags to everyone and everything that it’s hard not to at least enjoy their descent into madness just a little bit. Aside from them and the ensemble of quirky supporting characters, there are also hordes of humour to be found in the reference-heavy dialogue, which brings up everything from films to Glenn Campbell songs (which take up a majority of the soundtrack), and how they are delivered by the actors, but most of all you’re laughing along with just how deep these two crooked guys are willing to go to get what they want in the way that they want, to sometimes disturbing and provocative levels.

With regards to where I would put it in McDonagh’s filmography thus far, it does not come close to topping Calvary for me, and I would honestly put it underneath The Guard as well. I just found there to be something a bit more meaty in The Guard than this film, which can tend to meander just a little without a clear focused narrative, and also there just happened to be areas where I perhaps sympathised a little more with the crookedness in that film. That’s not to say that War on Everyone is a bad film, in fact all three of McDonagh’s films so far have actually been very enjoyable for various reasons, but while it is probably the least solid and – a term I use very lightly – the weakest, it still manages to rank in the laughs and entertainment as much as his previous films did. I had a good time with this film, regardless of whether or not it didn’t quite match the quality of the others, and I found it to be a fun and darkly comic crime caper that won’t necessarily capture everyone’s attention, but will definitely find something of a cult audience eventually down the line.

In fact, I reckon that War on Everyone would make a satisfying double-feature with Filth from a few years back, and who wouldn’t want to see the antics of two crooked-as-hell cops with Glenn Campbell on the soundtrack following the antics of a crooked-as-hell James McAvoy doing drugs and dragging up? Nobody, that’s who.

War on Everyone may not be John Michael McDonagh’s strongest film, and next to The Guard and especially Calvary it’s probably the writer-director’s weakest thus far, it’s still a darkly hilarious and entertaining exploration of crime and corruption that delivers the laughs and surprisingly philosophical discussions to a satisfied audience on a silver platter.