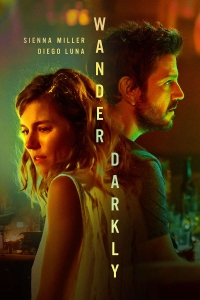 BASICALLY…: Two new parents (Miller and Luna) reckon with their trauma amidst their troubled relationship…

Ever wondered what a Terrence Malick movie would be like if it had focus, and was also more like a Nicholas Sparks adaptation? Wonder no more, because Wander Darkly – written and directed by Tara Miele – is perhaps the closest you’ll likely get to a coherent movie of that type, while also expecting a similar amount of heightened surrealism set to heavily philosophical debates about life, its meaning, and all that jazz.

As the film starts, things seem normal enough; we meet Adrienne (Sienna Miller) and Matteo (Diego Luna), an unwed couple who have just had a baby girl, Ellie, together. Their relationship is clearly on the rocks, however, with their private moments together spent arguing and being unhappy. Then, all of a sudden, they get into a car accident, in which Adrienne appears to have died, leaving her out-of-body spirit to wander around aimlessly across fragments of time, including Matteo breaking down at her funeral, and Ellie as an emotional teenager. Soon, though, she meets up again with Matteo, who seems to be acting as her literal spirit guide as he begins to take her through memories of their life together, both of them trying to piece together what might have gone wrong in their relationship and how, it at all, it could survive beyond everything.

Other questions start to seep into the mystery too, primarily whether Adrienne is actually dead or not; the answer will probably be eye-rollingly obvious to some, but Miele’s heavy ambition in both her writing and direction is at the very least interesting enough to leave you curious about where it’s all eventually leading to. Her direction takes light advantage of the dream-like scene transitions where completely different locations suddenly start to blend into one another (a living room is abruptly overrun by tiny waves on a beach), while large chunks of her writing are spent giving these two main characters an endless supply of deep conversations about mortality that they endlessly ping-pong between each other.

Despite the high aim, though, Wander Darkly doesn’t entirely work; for a lot of the film, it’s hard to stay focused because the structure and pacing can be very haphazard and dizzying, and it’s difficult to tell if it’s actually going anywhere since much of it feels somewhat directionless. Since it is rather muddled in its visual storytelling, it leaves a lot of the material here gravely in danger of coming across as extremely pretentious and hackneyed, because there is so much it wants to say about life, death, love and everything that it leaves precious little room for actual character growth, leaving the two leads as mere avatars for Miele’s inhuman dialogue and not much else beyond that. By the time you actually do get to know what’s really going on, it’s well past the point where you truly care about these people’s relationship with each other, because it’s not as interesting as everything else the film is throwing at you.

If nothing else, though, Miele was very smart to cast two extremely capable actors to carry even the most ridiculous of moments here. Both Sienna Miller and Diego Luna do very strong work here, both bringing a level of charm and charisma to some otherwise standard characters, and the way these actors play around with some of the expectations surrounding grief and acceptance can be both endearing and even hard to bear from an emotional standpoint. Even when the script threatens to get too cloying and manipulative – and there are certainly more than one instances where that’s the case – Miller and Luna still manage to bring the moment back around with their easy on-screen chemistry.

Like The Glorias, Wander Darkly comes with a heavy and admirable amount of ambition to its storytelling, yet doesn’t always provide the results that it is clearly hoping to achieve. There are definitely things to appreciate about it, especially the acting, but a lot of it felt a bit too loose to properly land, particularly in how it makes certain things rather complicated for the audience to initially go along with. It’s not something that I would ever see myself revisiting in the future, but I am still glad that I saw it because it had enough intrigue and emotion in its performances alone to make me want to see what will ultimately become of this wildly high-reaching story.

It perhaps won’t stick around for long, but Wander Darkly has way too much admirable ambition to be completely declared dead on arrival.

Wander Darkly is an admirably ambitious romantic drama from writer-director Tara Miele that boasts some strong turns by Sienna Miller and Diego Luna as a couple caught in a surreal mediation on their lives and relationship, but some dizzying visual cues and some borderline-pretentious writing prevent it from completely hitting its acquired target.

Wander Darkly is out now to rent or buy on digital platforms, including Amazon Prime Video.