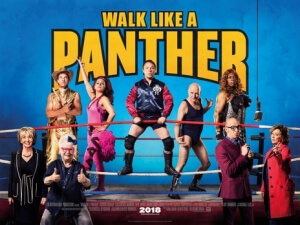 BASICALLY…: A group of former wrestlers band together one last time to prevent their favourite pub from shutting down…

Upon doing research for this review, I learned that Walk Like A Panther, before eventually turning into a feature film, was originally conceived as a sitcom back in 2011, to a point where a pilot episode was even shot with most of the same cast that ended up in the movie.

Suddenly, everything started making far too much sense, because this film feels, looks and acts exactly like a sitcom that’s been given the big-screen treatment, only in this case there wasn’t even a sitcom that came first, and to complicate matters further, it’s not at all one of the good ones.

The basic premise is of a group of former wrestlers living in a small town in Yorkshire, who were big back in the day when wrestling was popular on evening TV, but are now settled in to their more mundane lives and hanging out at The Half Nelson pub on evenings. Things are threatened, however, when they learn that the pub is closing down, and there’s only one thing they can do to stop it from happening – take a wild guess as to what that could be? Answers on a postcard, please.

You know exactly what kind of story this is, and you know even more precisely how it’s all going to play out, so what’s the point of caring about any of it? Truth be told, there’s not much point at all, as this is a great big empty void where absolutely zero laughter can be heard whatsoever, with characters who aren’t necessarily awful but are so thin that you could tear them into pieces like paper, and a completely senseless idea of how a movie is meant to function. If this did ever become a sitcom, with the kind of humour that this film has it would have lasted one series at most, because a lot of it is made up of really naff one-liners and pause-for-laughter bits of slapstick where everything just stops, whether it’s the actors or sometimes even the frame, so they can insert canned laughter right after it, only it never arrives here and it’s just awkward as a result. There’s one cameo in the film that only exists just so they can do a terrible pun based on the show that they are best known for; that’s the kind of humour we’re working with here, and it’s not only unfunny but sometimes painfully so.

I don’t fault any of these actors for being in this, including I, Daniel Blake’s Dave Johns who’s by far the best part of this movie (primarily because he’s playing it like a straightforward drama instead of the failed sitcom it actually is), but the lines and direction that they are given really don’t lend them any favours, as many of them are stuck with such contrived plots you would find in a half-hour episode of this proposed series, and it’s padded out with such needless filler that scenes will just repeat themselves, over and over again. Only during the climactic wrestling showdown does any sense of fun begin to creep in, because you can tell that the actors are genuinely enjoying themselves once they’re in the ring going at each other, but until then it’s such a slow slog to get through with largely unfunny set pieces and dialogue that will most likely bore you into submission before the climax.

Any more insight as to why this movie doesn’t work would just be me repeating myself; I don’t really watch a lot of television sitcoms anymore, but judging by this movie, if Walk Like A Panther had actually started out as one, it would have put me off of them for good.

Walk Like A Panther is a failed sitcom pilot turned into a failed sitcom movie, only they somehow bypassed it actually being a sitcom and went straight into making an unfunny, shoddily written and direction that is padded out to try and make every joke land, but they do so with a great big thud.