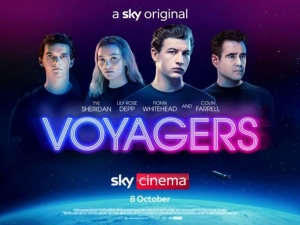 BASICALLY…: During an intergalactic voyage, a group of young people give in to their wildest urges…

“Lord of the Flies, but in space,” is presumably how the pitch meeting for Voyagers went – or at least, that’s how every review for writer-director Neil Burger’s sci-fi thriller assumes the pitch meeting went. There’s a reason for that, though: the film shares an extremely similar premise with William Golding’s classic novel, and doesn’t seem to hide its most obvious influence even with the added sci-fi elements.

You’ll either get a serious kick out of the blending of classic literature and the sci-fi genre, like how Disney’s Treasure Planet adapted the famous Robert Louis Stevenson book with aliens and space, or you’ll struggle to separate them and judge them as their individual selves. I fall somewhere in the middle with Voyagers, because it’s impossible to deny that for all of its flaws, there is a noticeable enjoyment one gets out of this mish-mashed set-up.

Set in the near future, mankind has found a distant planet in the solar system that can support life, meaning that they can leave a wasting-away Earth and start afresh. The problem is, it’ll take 86 years to reach their destination, so a group of young travellers are genetically engineered to man the space station transporting them across the universe, with the idea being that their grandchildren will be the first ones to step foot onto the new planet and colonise it for the future. Ten years into the voyage, though, the young cadets and their sole adult supervisor Richard (Colin Farrell) run into trouble when two of the cadets, Christopher (Tye Sheridan) and Zac (Fionn Whitehead), discover that the blue liquid they’ve been consuming all this time is laced with drugs that repress their natural hormonal instincts, and consequently stop drinking it. Almost immediately, things spiral out of control as the cadets start giving in to animalistic urges, and the ship descends into a battleground of sex, debauchery, and eventually murder, splitting members into factions and leaving them fighting for survival not just in the depths of space, but from each other as well.

Admittedly, Voyagers seems to be having some fun with the fact that it is putting its own space-set spin on a classic story like Lord of the Flies. You can tell that writer-director Burger is probably a huge fan of that novel, but also for paranoia-driven thrillers set in claustrophobic environments like a tightly compressed space station, and bless his heart he is doing whatever he can with the limitations placed upon him to combine both and make his film a suspenseful and fiercely intimidating time. His efforts, though, don’t always equal success, particularly in how it seems to skim over some of the more shocking implications that a space-set version of Lord of the Flies ought to focus more on; the fact that these young people essentially turn into rapists almost as soon as they go off their blue liquid diet, groping Lily-Rose Depp’s chest with sociopathic grins on their faces, is somewhat glossed over in favour of just showing them be animalistically wild and uncaged, which prevents the movie from being as shocking and provocative as it could have been.

It’s also the kind of plot where you could easily poke numerous holes through, because a number of character motivations don’t always make the most sense, nor do they exactly explain the rapid decline from intelligent but emotionless engineers to paranoid killers who will believe anything that crazed figures tell them to believe. The third act in particular goes so far into familiar sci-fi territory that it even introduces the kind of weapons usually found in a Star Trek episode, while most of the focus on the build-up of paranoia becomes a somewhat laughable mix of John Carpenter’s The Thing and the online phenomenon Among Us. Even some of the performances by the bright young cast descend into silly and over-the-top displays of psychopathy, which despite meaning that there are some pretty entertaining turns (looking at you, Fionn Whitehead) still seems like a wild contrast from the slightly more focused thriller it was starting out as.

Despite all of that, though, Voyagers is never really boring. There is fun to be had with how wild and crazy these people can get on this space station, which is shot pretty intensely with some well-done cinematography conveying mood and atmosphere even in its confined location. Like I said, the performances are entertaining as well, and you do get to see some of the actors go to some really dark places for a number of the bonkers moments that they are given to work with. Burger is a good director who knows how to entice and captivate his audience, but sometimes his scripts loose track of their ultimate destination in the process – Voyagers fits that description neatly, but it’s entertaining enough with his mash-up of premise and genre that you’re having a decent enough time anyway.

Voyagers has as much fun as it can with its “Lord of the Flies in space” set-up which is well-made and entertaining to watch, but some of its gaping plot holes and restraint on showing too much debauchery leave a little more to be desired.

Voyagers is now available to stream on Sky Cinema and NOW TV.