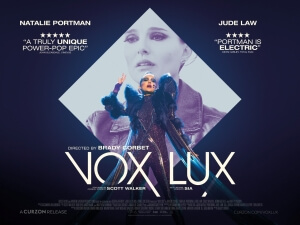 BASICALLY…: Celeste Montgomery (Portman) is a world-famous pop star who came to fame when, as a teenager (Cassidy), she survived a deadly school shooting…

The public’s interest in the private lives of celebrities is unhealthily high, and thanks to bottom-of-the-barrel sources like TMZ and various other paparazzi sites we have windows into their personal affairs that are beyond voyeuristic and slipping into an uncomfortable level of exploitation. As lavish a lifestyle as many of these famous people lead, the constant intrusion from the media whilst always having one foot in the public consciousness is surely having an effect on their own mental health and self-esteem; people tend to forget, celebrities are humans too.

However, in actor Brady Corbet’s second film as both writer and director, the very nature of celebrity is put on the stand and accused of being just as damaging to the individual as the never-ending amounts of media circling around them like vultures – or at least, according to Vox Lux, an entertaining antithesis to films like A Star Is Born that adopts a cynical, vapid and even disturbing attitude towards the very nature of being on top of the world.

The film is split into four parts; a prologue and epilogue, and in between two chapters respectively titled “Genesis” and “Regenesis”.  In “Genesis”, set in the early 2000s, teenager Celeste Montgomery (Raffey Cassidy) survives a devastating school shooting, and performs a commemorative song at the memorial, with help from her older sister Ellie (Stacy Martin). The song attracts nationwide attention, and she is soon placed in the hands of a gruff and dishevelled manager (Jude Law) who slowly moulds her into a pop princess. We then cut to “Regenesis”, set in 2017, when Celeste (Natalie Portman) is now a hugely successful pop star – think Britney Spears if she dressed like Lisbeth Salander – and also kind of a monster; she’s tactless towards reporters and fans, nearly always strung out on drugs or alcohol (or both), has had a series of scandals to her name, and has left the responsibility of looking after her own daughter Albertine (also Cassidy) to Ellie, with whom she is virtually estranged. This chapter is basically a day in the life, with Celeste dealing with all this stuff as well as the fact that terrorists have just conducted a mass shooting using her own iconography, leading up to a concert in her native borough of Staten Island.

Oh, and did I mention it was all narrated by Willem Dafoe? Not an essential piece of information, but it’s still nice to know.

It’s a very interesting story that Corbet has come up with, kind of this mix of a modern-day fairy tale and a cautionary fable about excess and paying the price for fame and glory, and it plays out with an overbearing sense of doom and gloom like it’s the kind of dystopian future that George Orwell warned us about. I’ve not seen Corbet’s previous film The Childhood of a Leader – though after seeing Vox Lux I would be very open to seeing it at some point – but from what I’ve read about it there seems to be a light connection between the two, in the sense that both are apparently about young people that are moulded into something far more toxic and dangerous than they started out as; both could be seen as “loss of innocence” narratives, certainly, but also ones with underlying tragedy about how warped a person can become on the road to infamy. It’s a story worthy of a Stanley Kubrick style both in tone and in scope, which makes sense because I was able to draw multiple parallels between Vox Lux and one of the filmmaker’s most notorious movies, A Clockwork Orange; both are movies that deal with a young protagonist being morphed into something they are not by the powers that be, but beyond that they are stylistically similar, with this movie incorporating fast-motion scenes of sex and drugs, grandiose orchestral music timed to stunningly boxed-in cinematography by Lol Crawley, and even working in the phrase “ultra-violence” during one scene to describe an instance of carnage and mayhem. Luckily, in this film nobody rapes anyone whilst crooning “Singin’ in the Rain”, so at least it knows where to draw the line.

The movie is made even more compelling by the performances, including Natalie Portman who is having a rocking time as this rather monstrous pop diva; how fun it must be for an actress to come to work and be paid to throw temper tantrums and treat most people like crap with a trashy Staten Island accent in front of the camera (hopefully not a reflection on who Portman is in real life), and she gives a rather enjoyable turn because of it. Jude Law is also quite entertaining as the nameless manager, always looking so dishevelled and grumpy in most if not all of his scenes, which is honestly not something we see a whole lot of in this actor nowadays, and I hope we get more of it because he’s actually quite good at it. The movie, though, belongs to Raffey Cassidy, who knocks it out of the park in not one but two separate performances; she takes the lead in “Genesis”, and she does such an eerily good job at impersonating Natalie Portman that you have no problem buying that these two actresses are the same person; and in “Regenesis”, obviously she steps back a little to let Portman hog the spotlight, but she is no less compelling in a smaller, but certainly sadder, role. The attention for this film will mostly be on Portman, as it should, but Cassidy should not be forgotten as someone who nails two very different but equally impressive turns in the same flick.

While it won’t be everybody’s flavour, I found Vox Lux to be quite a fun antidote to recent movies about the music industry; if A Star Is Born is the cool and smoothing water, then this is the bitter lemonade with the pips still inside.

Vox Lux is an entertaining antithesis to movies about celebrity, with writer-director Brady Corbet channelling his inner Stanley Kubrick to deliver a stylish saga of a pop princess’s climb to fame, and strong performances by Natalie Portman, Jude Law and especially Raffey Cassidy in not one but two roles helping to highlight the vapid but also tragic nature of the business.

Check out Vox Lux showtimes in London
on Walloh.