Violation (Review) – This Revenge Is Served Rather Cold 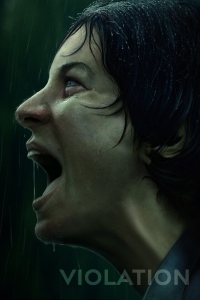 BASICALLY…: After a traumatising betrayal, a woman (Sims-Fewer) carries out her own brand of revenge…

The rape-revenge genre is certainly one that’s tough to stomach, especially for survivors of sexual assault who watch films like I Spit On Your Grave and cannot watch certain sequences without triggering some disturbing memories, but like most examples of exploitation cinema, there is usually some sort of satisfying payoff that leaves you relieved that the attackers are getting what’s coming to them. However, in Violation – the joint filmmaking effort by Dusty Mancinelli and Madeleine Sims-Fewer – no such satisfaction exists, because not only does it take a very dark approach to an even darker subject, but in a troubling twist you’ll find yourself rooting for the victim about as much as the perpetrator.

That’s not necessarily a criticism, because it does lend some interesting conversation pointers to the already vivid debate about rape and victim-blaming, but for all of its ambition there is something rather cold and empty at its centre, and it can’t help but feel as though something vital is missing for the movie’s overall intentions to stick.

Violation opens up as a woman named Miriam (Sims-Fewer) and her husband Caleb (Obi Abili) are travelling from London to a remote country getaway with her sister Greta (Anna Maguire) and Greta’s husband Dylan (Jesse LaVercombe). Miriam and Caleb are clearly distant from one another, while Greta and Dylan’s relationship is blooming, something which Miriam is visibly jealous of. However, one night during a drunken back-and-forth around a campfire, Miriam crosses a boundary and kisses Dylan; the next morning, he’s on top of her, in full penetration mode while she’s still sleeping. What follows next shouldn’t be too much of a surprise to those well-versed in rape-revenge cinema, but what matters here is the presentation, and this is where the movie starts getting weird.

The film is told in non-linear fashion, which means that it will suddenly cut back and forth to moments in time that make the overall narrative feel rather confusing; for example, we will see Miriam and Dylan locking eyes around a campfire one minute, then it will cut to a later scene where the two are apparently (and consensually) hooking up, and then back to the pivotal moments around the campfire that set this whole story into motion. Non-linear storytelling has worked well in other rape-revenge movies like Gaspar Noé’s Irréversible, which utilised the fragmented structure to chilling effect, but in Violation it frustrates more than it compels, because you’re trying to piece everything together only for it to then continue jumping around from one place to another before you can make sense of it all. Had it have perhaps been a more straightforward film, as the linear opening fifteen minutes seem to indicate, it might have been easier to absorb a lot more naturally, as opposed to just having little bits of information drip-fed every so often.

Perhaps, though, there is a point to the film’s scattered approach, as it clearly wants to leave you just as disorientated as Miriam is when she’s violently taken advantage of, but the way that this particular plot progresses in all of its chopped-up misery, it doesn’t especially leave you on anyone’s side. What both Mancinelli and Sims-Fewer are clearly aiming for here is a rape-revenge thriller that’s also part-psychological drama, since we discover that Miriam has a rather overblown way of handling certain things under the pretence of protecting others – we learn that as a child, she violently threatened her mother after she physically assaulted her sister, and even poured bleach over the flower beds of a classmate’s mother after they called Greta a slut – and, characteristically, her reaction to being sexually assaulted is equally within “well, that escalated quickly” territory. However, what should be a straightforward case of cheering on as the victim takes her revenge on the attacker, instead becomes something a lot more gruesome and disturbing which, again, is kind of the point, but it still doesn’t give anyone any satisfaction, because the violence is grim and hard to watch, but most importantly you aren’t sympathising with Miriam as much as it wants you to; she comes across as psychopathic during her far-too-well thought-out revenge plan, as it has the makings of a serial killer you’d see on a series of Dexter than someone who’s driven to the edge in the wake of this assault.

It ultimately leaves the movie with a bitter coldness to it, and I realise that a movie in which people are raped is never going to be a ray of sunshine, but since it’s too fragmented to get behind the storytelling and with its main character being a hard-to-like cypher who you never really fully understand, the sense of detachment lingers over a lot of its more desirable qualities. That is a shame, because stylistically it’s quite fascinating; mixing some moody woodland cinematography with the occasional surreal imagery, it’s a visually splendid film, and the acting from just about everyone – most of all Sims-Fewer, who firmly commits to her character and the unspeakable things she does – is top notch. It is also one of those films which respectfully reserves its violence for when it’s needed, and when it does get gory it’s pretty disturbing to witness in a way that makes you want to see these filmmakers take on more display of body horror.

There is definitely a great movie buried somewhere within Violation, if only it would actually let things play out how they’re supposed to instead of frustratingly going back and forth all the time, and if we actually understood more about the psychological turmoil of some of its characters so we wouldn’t take them as complete psychopaths at face value. Unfortunately, because its flaws just about outweigh its strengths, I wasn’t as fond of this movie as others seem to be, even though I do respect it for what it was trying to do, despite it not entirely working for me.

Violation attempts to take an ambitious approach to the rape-revenge genre, complete with some stylish visuals and strong acting, but a disjointed narrative leaves you just as discombobulated as the lead character is after her violent assault, and even then you find yourself struggling to root for this lead with some disturbingly psychopathic tendencies, which are barely explained or looked into as much as they probably should.

Violation is now available to stream on Shudder.