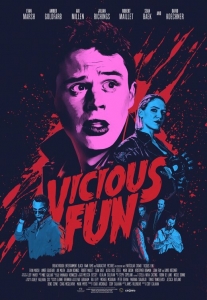 BASICALLY…: A horror film critic (Marsh) finds himself stuck at a support group for serial killers…

Jumping right into another horror-comedy about serial killers immediately after watching Freaky is just as odd an experience to describe as it is to actually endure, but Vicious Fun – from director Cody Calahan, recently of the rather decent thriller The Oak Room – does at least keep the momentum alive with its own brand of dark comedy and gruesome gore, even if it’s not quite as neatly balanced as this week’s other serial killer comedy-horror.

The protagonist in Calahan’s film is Joel (Evan Marsh), a film critic for a horror magazine in the 1980s, and who also hopelessly pines for his attractive roommate Sarah (Alexa Rose Steele), even though he has very clearly been placed in the friend-zone. Suspicious of her newest catch, a slick and pale-faced smooth-talker named Bob (Ari Millen), Joel follows him to a Chinese restaurant which turns out to be the secret meeting place of a support group for serial killers: hosted by war veteran Zachary (David Koechner), the meeting is also attended by other psychotic murderers like switchblade-carrying Carrie (Amber Goldfarb), clown-dressing Fritz (Julian Richings), cannibal Hideo (Sean Baek) and thuggish Mike (Robert Maillet). In order to avoid being their next victim, Joel attempts to fit in with his own fabricated stories about killing people, but very soon the night descends into chaos and Joel finds himself fighting for his life.

Calahan, directing from a script written by James Villeneuve (with Calahan also given a story credit), is perhaps a bit more overt with his attempt to pay homage to the serial killer subgenre than Christopher Landon was with Freaky. In Vicious Fun, it’s clear as day the various kinds of killers that he and Villeneuve are caricaturising, whether it’s Jason Voorhees or Hannibal Lecter or Patrick Bateman or even Pennywise, but instead of having their own definitive personalities these characters largely just feel like blatant rip-offs of those much more iconic movie serial killers. The performances that these actors give, especially Ari Millen who seems to be doing a straight-up impression of Jim Carrey for most of the movie, are also gravely exaggerated, to a point where you can tell that these people know that they’re in a comedy as opposed to a full-on horror, which makes it somewhat less intimidating because you’re aware they’re going over-the-top for the sake of comedy, instead of actually posing as a genuine threat. The lines they’re given, the direction, the acting choices, even the overall 80s aesthetic; it’s all very aware of itself, and some of it can be quite entertaining to watch, but not in the fun kind of way that Freaky was able to manage, because you’re more just sitting there waiting for the next call-back to the kinds of movies it’s paying tribute to.

It’s fairly obvious that I didn’t enjoy Vicious Fun as much as Freaky, but that isn’t to say that this film doesn’t have anything that’s worth highlighting. Although its balance of horror and comedy is a lot more tilted than the other film, this one has a neat build to it, slowly working its way through one horrifying encounter after another, and fitting in some decent kills containing fine effects work for the small budget they were clearly working with. The movie also has some fun with deconstructing some horror movie tropes, occasionally to a meta extent; part of Joel’s fabricated story is describing how he kills people as a taxi driver (itself derived from a hackneyed script he’s trying to write), which is very quickly torn apart by the many inconsistencies in the basic idea which would easily get him caught, providing both feedback for a silly idea but also commenting on certain horror critics who think they know everything about the genre just because they write about it all the time (I shouldn’t be one to judge, given what I do, but at least I’m honest when I say I know nothing about certain topics). Other horror clichés like the killer sneaking up on someone, or the clueless individual who goes investigating dark rooms, have some rather funny payoffs here as well, but in terms of actually being intimidating, the film lacks the nerves to appeal towards both genres as Freaky was quite masterfully able to do.

I’d hesitate to call Vicious Fun, well, exactly that, but I would say that this is a fine stab at it. It’s got some entertaining qualities, from its over-the-top performances to some of its deconstruction of certain movie tropes, but as a horror-comedy it’s far more in tune with its comedic side than the other, and for it to fully work it perhaps needed to embrace both at the same time while giving each genre enough attention and love. What we have here isn’t necessarily bad, but given the choice you’d be better off with Freaky.

Vicious Fun stops short of fully living up to its title, largely due to an inconsistent balancing of its horror-comedy elements, but there is some entertainment to be had from its fun jabs at genre clichés and the occasional over-the-top performance from its vicious ensemble.

Vicious Fun is now available to stream on Shudder.