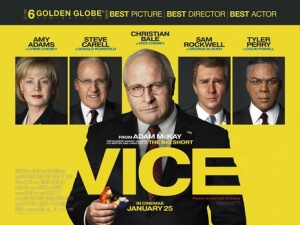 Adam McKay’s sudden transition from being the guy behind several Will Ferrell comedies like Anchorman and Step Brothers to becoming an Oliver Stone-like auteur who tackles major economic and political issues in films like The Big Short and now Vice, is a rather mind-numbing thing to comprehend.

I mean, who in their right mind would have thought that the same filmmaker who once filmed Will Ferrell and John C. Reilly as man-children screaming and shouting at each other (long before Holmes and Watson made that uncool) would not only go on to make a hard-hitting dramedy about the 2008 financial crisis, but also then make a warts-and-all biopic about one of the least admired figures of the Bush administration from the early 2000s? Nobody, that’s who, and although Vice perhaps lacks the true bite that McKay’s previous movie was able to implant upon its subject matter, it represents a much more bold step towards showing the true ugliness of humanity through a flawed but intriguing study of a very powerful man indeed.

The film follows Dick Cheney (Christian Bale) throughout most of his life, from his days as a boozy Yale dropout to him cleaning up his act – after a stern talking-to by his wife Lynne (Amy Adams) by taking on an intern role in the Nixon White House, where under the tutelage of Donald Rumsfeld (Steve Carell) he quickly learns the ins and outs of who has the most power when it comes to the Presidency. This all eventually leads to when, years later, Cheney is sought after by George W. Bush (Sam Rockwell) to be his running mate in the upcoming Presidential election of 2000, a race they would of course later win, and so Vice-President Cheney – having acquired various insider knowledge about where much of the power lies – becomes more and more powerful once he begins overseeing various departments including foreign policy, soon becoming instrumental to a lot of significant events such as the invasion of Iraq after 9/11.

It’s clear why McKay is going after a Republican figure at a time when the Republican party is more unpopular than ever, but the film is not entirely a hit piece on Cheney’s dismal contributions to the world as we know it today; to the best of his ability, along with his trademark sense of humour that helped The Big Short become a lot more entertaining than it could have been, McKay tries to make him seem a much more complex figure that’s not necessarily a positive portrayal by any means, but is enough to give a better rounded and humanised idea of the man most people tend to not like. Regardless of what your opinions on Cheney may be, his path towards larger power than the President he served directly under is fascinating and somewhat under-looked, and the film does just as eye-opening a job at making his story feel very cinematic, complete with several instances of quirky humour that McKay tends to throw in every so often. For instance, there’s an imagined scene where Dick and Lynne Cheney are plotting their eventual rise in politics using Shakespearian language, and the film humorously begins wrapping things up midway with a false epilogue and the credits even starting to play just before Cheney gets that life-changing call from Bush; there’s also a narrator played by Jesse Plemons who we cut back to every now and then, and whose significant role in Cheney’s life is revealed in very shocking circumstances. The film, much like The Big Short, uses this kind of dark satirical humour to hold audiences’ hands through a lot of it, but here it doesn’t always land as effectively because at times it seems to get a little too angry and damning for its own good, which is understandable seeing how it was made during such a divisive time in American politics, except it may have impacted McKay’s ability to tell this particular story with as big a sense of humour as his previous movie.

Despite this, McKay has made an ambitious and intriguing movie that will certainly have its lovers and haters, but no matter what people think of this – and I can easily see this becoming an extremely divisive movie for some – it cannot be denied that it has an absolutely fantastic lead performance to lean back on. Christian Bale as Dick Cheney is other-worldly, due in part to some damn impressive make-up but also to Bale’s extremely uncanny portrayal of the man himself; most times, you forget that it’s even Bale playing the part, and you become convinced that this is the real Cheney you are actually watching. Bale’s physical dedication to some of the roles he has undertaken is no secret – I mean, just look at all that weight he lost for The Machinist – and here he’s once again pushed the envelope, though one wonders what his physician must make of his constant weight gain and loss all for the sake of art, even though it has certainly worked in his favour this time around. Bale is supported by strong turns from Amy Adams who shines as Lynne Cheney, Steve Carell whose Donald Rumsfeld swings back and forth from Michael Scott from The Office and Brick Tamland from Anchorman, Sam Rockwell who gets a couple of laughs as the dim-witted and easily manipulated Dubya, and even Tyler Perry in a brief role as Secretary of State Colin Powell makes us all wish he did more dramatic roles like this and in Gone Girl than all those Madea movies.

It’s certainly a flawed movie, and perhaps not as strong-willed as it could have been, but an ambitious approach and a bravura lead performance by Christian Bale make it worth seeing alone.

Vice is an intriguing, if flawed, look at the rise to power for Vice-President Dick Cheney, which is held together by an ambitious approach by director Adam McKay, and an absolutely transformative lead performance by Christian Bale.