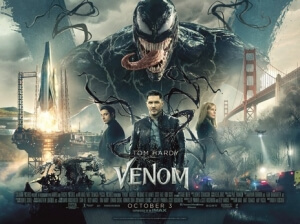 Even though they’ve struck a deal to share the rights to Spider-Man with Marvel Studios – one of the smartest decisions they’ve made in the past few years – Sony is still keen on bragging how they’ve got access to some of the web-slinger’s most treasured assets, one of them being his arch-nemesis Venom. Co-created by Todd McFarlane, who would go on to leave his own mark on comic book lore with Spawn, the character gained significant popularity with readers and was even awarded his own comic series, which positioned him as more of an anti-hero than the straight-up villain he was known for. In the film world, however, he’s had a tricky road; we all know about his underwhelming and all-too-brief appearance in Sam Raimi’s Spider-Man 3, and a solo movie to rectify it was in development for years, with talent such as Deadpool writers Rhett Rheese and Paul Wernick, and even Fant4stic director Josh Trank coming and going from the project (though with the latter, maybe it’s a good thing he didn’t go on to make it).

Now that a Venom movie is finally out, though, was it worth the wait? It certainly didn’t seem it would be, given that the trailers were all pretty lacklustre and always gaining some kind of complaint from hardcore comics fans – “Venom was hardly in it!” “it’s pronounced sym-BEE-ote, not sym-BYE-ote!” “Like a turd in the WHAT now?!” –  causing a bit of bad buzz before it had even come out. However, now that I have seen the movie, I can confirm that Venom is, indeed, pretty much what you’re expecting it to be, in that it’s not very good at all.

In the film, reporter Eddie Brock (Tom Hardy) is investigating shady genetics scientist Carlton Drake (Riz Ahmed), but his disastrous interview with him ends with Brock being fired and dumped by his girlfriend Anne Weying (Michelle Williams). Down on his luck, he continues his investigation after receiving a tip-off from fellow scientist Dora Skirth (Jenny Slate), who tells him that Drake is experimenting with dangerous alien lifeforms known as “symbiotes”, and a visit to the lab results in Brock being bonded with one of the symbiotes which calls itself Venom. Taking control of Brock’s body whenever it pleases, whilst also giving him superhuman strength, the creature forms an uneasy alliance with Brock as it roams about causing mayhem.

The film is an odd mess, to say the least; it has no idea what kind of tone it wants to stick with, whether it be a dark and psychological one or something that’s considerably goofier than one might expect. As such, there are plenty of scenes that often tread into unintentionally hilarious territory, because of how ridiculous some of the writing, action and even acting choices can be, as well as how seriously it is treating itself half the time. Tom Hardy’s performance in this film is certainly physical, and God bless him for trying his hardest with the material he is given, but sometimes he is directed not as if he’s experiencing severe psychological trauma but instead like something out of a Jim Carrey movie from the 90s; some of the things he does here are so outrageous and completely bizarre that you have no idea whether to laugh or pity it, but end up going for the former because how could anyone not laugh at how ridiculous some of his choice are here?

What makes it even funnier, though again I want to reiterate that it’s unintentionally so, is that this movie seems to genuinely believe that it’s being this really edgy and bad-ass alternative superhero flick, but it’s such a bloodless and toothless pile of generic waste that it comes across more as some pathetic dweeb on the playground breathing in his chest and adopting a lower-pitched voice in an attempt to look stronger than he actually is. It frustratingly takes a while to get going, with a first half that seems to drag on and on with characters you don’t really know or care that much about and a story that only proceeds to get dumber and dumber as it goes along – Venom doesn’t even make his first full appearance in the film until well into the second act, and by then it’s been a mostly dull ride with the odd moment of insanity here and there. By the time it does reach a crescendo, you’re left not entirely sure what in holy hell it was you just witnessed, because a lot of the action takes place in the dark and shot with neutering shaky-cam that makes it difficult to tell what is happening, and the plot has taken so many nonsensical paths to get to this point that you’re wondering how certain characters got to where they’re at.

You can pick up on hints of what the film is trying to accomplish, like the severe psychological trauma that the alien’s possession is having on this guy, not to mention a kind of buddy movie with the several back-and-forths between Brock and Venom, but it’s thrown into the mix with a generic superhero movie and an awkward physical comedy, and comes out completely confused and all over the place. If you want a version of this movie that’s done with far more style, sophistication and intelligence, just watch Upgrade instead of this one; it has way more of an idea of what kind of things it wants to do and how to do them, whereas Venom is a dumb studio movie made by people who have absolutely no idea how to make a straightforward blockbuster to save their own skin, and also have the audacity to force in a preview during the end credits of what looks to be a far superior Spider-Man related movie coming out soon. At least that movie looks like it will be intentionally funny.

Venom is an odd mess, confused with what tone it wants to stick with to a point where some of the decisions become unintentionally hilarious, but has ideas that are unfortunately mixed into something generic and forgettable.