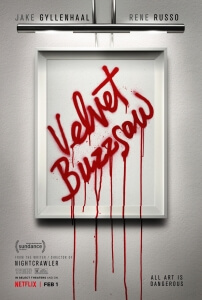 BASICALLY…: When a series of mysterious paintings are uncovered, a supernatural force enacts revenge on those who let their greed get in the way of art…

After making a splash in 2014 with Nightcrawler, and then failing to meet those expectations with his 2017 follow-up film Roman J. Israel, Esq., writer-director Dan Gilroy seems to have gone completely off the rails for his third feature, the art satire by way of supernatural slasher horror film Velvet Buzzsaw, a movie with such bonkers ideas and heavy ambition behind it that you can’t help but admire it, even when you realise that it’s about as unfocused and sloppy as some of the mediocre art that Jake Gyllenhaal is critiquing in this film.

Gyllenhaal is part of an ensemble cast; he plays snobbish art critic Morf Vanderwalt, whose friend Josephina (Zawe Ashton) – an agent working for icy art gallery owner Rhodora Haze (Rene Russo) – discovers a series of paintings in the apartment of recently-deceased neighbour Vetril Dease (Alan Mandell). Josephina, Morf and Rhodora – along with fellow art contemporaries such as curating assistant Gretchen (Toni Collette) and embittered artist Piers (John Malkovich) – all become fascinated with Dease’s paintings, and seek opportunities to exhibit and sell them, but things begin to take a surreal turn when several of these characters begin to die at the hands of the mysterious force that is bringing the artwork to life.

This is the kind of movie that a filmmaker makes once they’ve left enough of an impression on the film world that they can go ahead and just do whatever the hell they want to do; in this case, Gilroy has made a movie that’s somehow both a horror movie and also a scathing parody of the pretentiousness of the art world, and the results are fascinating albeit not entirely for the intended reasons. Gilroy gives the film a very camp tone throughout, displayed in the over-the-top performances he instructs his actors to give – especially Gyllenhaal, who is a flailing and flamboyant caricature of what a five-year-old thinks a snobbish critic is for the vast majority of the picture – and particularly in how he writes these people to say and do things that are straight out of a high-end soap opera. Once the horror themes begin to kick in, however, it’s as though a completely different movie has suddenly taken over, with the amount of gore and jump-scares you’d find in an average Blumhouse production, all of which just happens to take place in this satirical reality. The movie has very insane ideas of what kind of movie it wants to be – a scathing satire in the vein of The Player or even Gilroy’s own Nightcrawler, or a shocking and surreal horror movie that Darren Aronofsky would jizz himself over – but the tones feel so mismatched, often done for shock effect more than for actual cohesive storytelling, and the focus so all over the place, that it’s hard to admire outside of its overwhelmingly high ambitions.

The ensemble cast that Gilroy has gathered for this, including his Nightcrawler stars Jake Gyllenhaal and Rene Russo (the latter being his wife of nearly thirty years) as well as rising actors Zawe Ashton, Billy Magnussen and Stranger Things’ Natalia Dyer, and prominent characters actors like John Malkovich and Toni Colette, all do some solid and entertaining work here, but the script that they have been given is so keen to give each and every one of them a prominent part that the film never finds a proper focal point from which to tell this story. If Gyllenhaal or even Ashton had been the lead character in this film (as both probably have the biggest story arcs in the entire film), with most of the supporting cast reduced to slightly smaller parts, then the movie would have at least had a perspective we could easily follow; but at various stages the movie decides it’s going to follow Tom Sturridge as a competing art dealer for a little while, and then seeing what Toni Collette is up to, before then cutting back to Gyllenhaal, Russo, Ashton and Malkovich (the latter of whom just kind of disappears from the movie halfway in; he doesn’t even get a death scene) etc. It’s pretty unfocused when it comes to these characters, as it seems like Gilroy liked these characters so much that he simply couldn’t decide which one of them to make the definitive lead, and decided to just go with all of them instead; as a result, you’re left feeling a little lost as you’re not entirely sure who we’re meant to be following all the way through, despite the campy and extremely entertaining performances that they are giving.

Even the horror aspect of the film is pretty clunky, because you’re not entirely sure what it is that’s causing all of these horrible things to happen; now, I understand that in most horrors the terror comes from not knowing too much about whatever entity is causing all the mayhem, but I feel that a little explanation as to how these impossible things are happening, even in a heightened reality such as this, would have made all the difference in the world. The deaths, when they do come, are pretty creepy and shocking, but some of them are caused by these characters doing things that only the most gullible of morons in your typical slasher film would do that make you not feel so bad that they’re about to get killed; again, the film is so schizophrenic when it comes to deciding what genre it wants to be that you just don’t believe it when these highly sophisticated people suddenly do things that only people in slasher movies would do that would easily get them killed.

Because the movie is so crazy in its ambition and amusingly bonkers in its execution, it’s almost worth recommending based purely on that; but it’s still not a particularly strong movie that doesn’t quite find its footing.

Velvet Buzzsaw is a movie filled with crazy ambition and insane ideas, which are so bonkers that it’s worth seeing for those reasons alone, but its primary lack of focus and understanding of what it wants to be cripples its dreams somewhat.