Vacation Friends (Review) – What Happens On Holiday Doesn’t Stay There 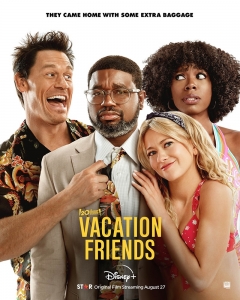 BASICALLY…: An engaged couple (Howery and Orji) are horrified when the wild couple they met on holiday (Cena and Hagner) suddenly show up for their wedding…

Now that Disney+ has its own adult section under the Star brand (saving them from having to introduce Hulu, which the company also owns, to UK consumers), it’s rather amusing to see mature content show up on the same streaming platform as classic Disney movies from your childhood. You could be scrolling through to find Dumbo and come across The Walking Dead; the window for Frozen could be right next to that of Mike and Dave Need Wedding Dates; and how great would it be to see Vacation Friends, the streamer’s rather raunchy new original movie, sat amongst something as wholly innocent as Bambi?

While it is an amusing thought to see these wildly contrasting properties on a predominantly family-friendly service, Vacation Friends oddly enough does feel like it belongs on such a streamer. Produced under the Disney-owned 20th Century Studios, the comedy is certainly geared towards an adult audience but it also seems to be of that juvenile nature which can very often detrimental to a film’s sensibility; it’s probably for the best that such a wild movie is best experienced at home where you can pause if it becomes too much, as opposed to sitting impatiently in a quiet auditorium without many other options. However, it isn’t completely intolerable thanks to the efforts of a game cast, powering through a somewhat stale formula and an uneven supply of humour.

We open in Mexico, where uptight couple Marcus (Lil Rel Howery) and Emily (Yvonne Orji) arrive for a holiday together. Marcus intends to propose to Emily, but when things don’t work out as planned, they end up sharing their trip with wild and rambunctious couple Ron (John Cena) and Kyla (Meredith Hagner), and they all end up drinking hard and partying even harder together. However, when the holiday ends and the time comes to share contacts, Marcus and Emily are keen to forget their wild adventures and move on with their lives; cut to seven months later, during their wedding weekend, when Ron and Kyla suddenly show up uninvited and attempt to restart the fun, while impressing family members that the engaged couple themselves struggle to connect with.

The material that Vacation Friends relies upon falls into the same ballpark as a lot of other wedding-centric comedies, the kind where the uninvited guests show up to cause havoc just before the big day, and it comes with a lot of the familiar tropes – disapproving parents, hostile family members, the wheelchair-bound grandmother who’s barely able to comprehend a sentence – that are more or less played safe here. It never becomes outwardly hilarious, because a lot of what we see has been done better in other movies like this, right down to the big embarrassing speech where almost everything comes to a head (and, of course, more than a few punches are thrown), but it’s by no means among the worst example since there are wedding comedies out there that do tropes like these so much more intolerably. It simply is what it is, a crude and irreverent comedy which – much like its newlyweds-to-be – sticks all too closely to the tried-and-tested formula, rarely deviating from the path set for itself.

Why it works just okay enough, as well as why you’re not completely annoyed by the generic raunch it has to offer, is because the main actors do work rather well together. They share good, believable chemistry with each other, to a point where you can completely buy why this straight-laced couple would be wooed into debauchery by this other, much more free-spirited (for better or worse) pairing, since they are charismatic enough to entice you into their crazy, unpredictable world. Lil Rel Howery and John Cena, both comedically talented actors, share a surprisingly sweep rapport as the straight-man and loose cannon respectively, and while Yvonne Orji and Meredith Hagner don’t have nearly as much to do (they mostly hang at a spa while the boys engage in high-stakes games of golf), the actresses clearly show a decent enough understanding of delivering a raunchy punchline without going too far over the top.

If it weren’t for our main quartet, Vacation Friends really would just be a run-of-the-mill wedding comedy that belongs on a streaming service, but while the overall quality perhaps doesn’t exactly call for a theatrical engagement, it’s okay enough for a harmless casual watch during an evening in front of the TV. It’s worth watching just for the surreal mushroom-induced drug trip alone – that, and watching John Cena fire a gun at a bottle directly above Lil Rel’s head.

Vacation Friends doesn’t deviate from the familiar path of other wedding comedies with its use of familiar tropes, but the uneven material is livened by a game quartet of lead actors who deliver the material with a respectful earnestness.

Vacation Friends is now available to stream on Disney+ Star.