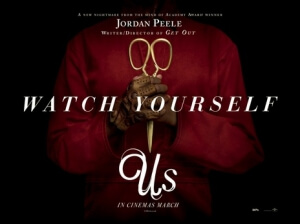 BASICALLY…: A family is terrorised by a group of strangers who look exactly like them…

Anticipation was already high when Jordan Peele announced his follow-up to Get Out, but after actually seeing Us, you’ll be immediately clamouring for whatever he has planned next.

Not only is writer-director Peele’s sophomore horror film an incredibly accomplished outing that sees him venturing further into our nightmares to make one of the scariest films you’ll see in years, but it’s a relieving confirmation that his first film was no lightning in a bottle; Peele is the real deal when it comes to making smart, entertaining, and most importantly terrifying movies that say things we as a society are just too polite to say out loud, and only two movies into what will surely be a long and prosperous career for the man, he is already worthy of being in the same conversation as Alfred Hitchcock, Wes Craven, John Carpenter and other notable horror filmmakers.

I’m going to keep as much of the plot as I can under wraps, because you seriously need to go in knowing as little about it as possible (I’ll only mention plot points already revealed in the trailer); the main crux of the story centres on a family of four, including mother Adelaide (Lupita Nyong’o), father Gabe (Winston Duke), teen daughter Zora (Shahadi Wright Joseph) and young son Jason (Evan Alex), heading to a family beach house in Santa Cruz for a summer getaway. Of the four, it is mostly Adelaide who feels apprehensive about being there, seeing how she had a traumatic experience there when she was younger (detailed for us in a haunting opening sequence), and is understandably reluctant to return to the place where it all happened. Her fears are confirmed when, that night, a family dressed in red invades their home and begins terrorising them – the thing is, this family looks exactly like them, except for a few notable differences such as communicating largely in grunts (with the exception of Adelaide’s doppelganger who is the only one of them to speak; by the way, nothing can prepare you for how chilling her voice is, but more on that later), and they are about to make this family’s night a living nightmare in every sense of the phrase.

I dare not go into any further detail, because that would seriously give away the many, many surprises that Peele has up his sleeve here. Part of the fun of it all is knowing next to nothing about this movie other than the basic plot and the people working on it; if you watched the trailer and have absolutely no idea what’s going on, then I implore you to keep it that way until you watch the film. Seriously, do not look up any other information online, don’t click on articles that dive into its deeper meanings, and don’t even think about scurrying around for spoilers; go into this movie with a blank slate, and you will be greatly rewarded with something that takes you on one hell of a frightening rollercoaster ride that takes you in many unexpected directions, from up to down, left to right, and all the gaps in between.

Admittedly, it does make my job a little more difficult as I’ve still got to write about exactly what it is that makes this movie so damn good, but I’ll try and be as vague as I can while still talking about certain things which definitely need to be addressed. One of those things, for example, is the story; this is a much more straightforward horror movie than Get Out was, but Peele is way too bright a storyteller to simply rely on jump-scares and cheap moments of shocking violence. He takes the incredibly unsettling idea of there being no greater foe than our own selves, and just runs with it; in the process, he raises some intriguing conversations about the very worst aspects of our own humanity, from vanity to regret to complete and all-out insanity, which make it especially fascinating since we’re living in a world where our past actions, comments and beliefs can come back to seriously haunt us. Just ask people like James Gunn, who was fired from the third Guardians of the Galaxy movie over previous jokes he made about paedophilia among other taboo subjects; sure, he was recently reinstated as its director (thank God), but the point is that at the time, it was a serious case of something he said many years ago that had severe consequences further down the line. Peele very cleverly visualises these internal fears into a hybrid of unnerving home invasion movie and sinister slasher flick, brilliantly playing with universal paranoias such as these in the template of an increasingly suspenseful horror movie which is not only scary as hell, but also has enough strong social commentary that makes it vital viewing in an age where our past tweets can come back at any time to bite us in the ass.

Peele is also able to wonderfully balance the natural horror tone that comes with this sort of idea, and also a refreshing sense of comedy that comes exactly at the right time and never feels too out of place. Winston Duke’s character, for example, is introduced as this rather goofy father figure that you’d normally see in a cheesy family sitcom, throwing out one-liners and doing some rather cringe-inducing things that makes you think he hears a laugh track in his head every time he does something like that; it’s not until things get way too real later on that he does step up to help protect his family, but given his natural instinct to crack a joke every now and then, he is still saying things that are clearly designed for a laugh, and more often than not they come at very dark and disturbing moments as this particular story unfolds. In lesser hands, this would feel incredibly out of place in a film that is otherwise wholly terrifying, but Peele manages to make it work because he makes it feel incredibly natural and like exactly how a person set up in this way would react to this endlessly disturbing situation. Plus, the stuff he’s actually saying is also very funny – not a surprise, given Peele’s strong comedy background – and Duke can deliver these one-liners like a true champ.

He’s not the only cast member to given an outstanding performance in this film; in fact, every single person plays their dual roles pitch-perfectly, especially Lupita Nyong’o who not only gives a compelling and sympathetic turn as the terrified mother in the situation, but will absolutely haunt you as her menacing lookalike. Since she is the only one of the red-clothed doppelgangers to speak, Nyong’o gives hers a raspy, bone-chilling voice that’s like chalk on a chalkboard, and it’s seriously one of the scariest voices you will ever hear from a villain in a horror movie; she has a few monologues with this voice, including a story she tells the terrified family when they first meet her, and good luck not crapping yourself as the actress tells it in such a way where your body is left so tense that you cannot even cross your legs. She is fantastic in both roles, as are all the other actors who are just living the dream of playing both hero and villain in the same movie, all while under the direction of a true horror master if ever there was one.

If you’ve made it this far into the review, then you clearly haven’t gone out to see it yet, so get on it right this instant. It’s a horror movie with brains, depth, and most of all scares to keep you up all night, and you would be foolish to miss it. An absolute knock-out from a filmmaker in his element, Us is a brilliant, terrifying and unmissable one-off.

Us is a fantastic second feature from writer-director Jordan Peele, who brilliantly plays around with several underlying social themes and moulds an extremely effective horror movie out of it, complete with terrifying performances from an extremely dedicated cast. It is utterly unmissable.