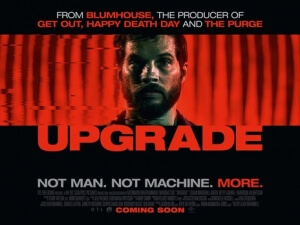 BASICALLY…: In the near-future, a paralysed mechanic (Marshall-Green) is fitted with an AI chip that restores his ability to walk, but also gives him an incentive to seek revenge…

Leigh Whannell is steadily becoming a loud and clear voice in the world of horror, thanks to his numerous scripts for the Saw and Insidious movies among others, and fan recognition following his separate recurring roles in both of those film franchises, but his latest movie is by far and away the one that is surely destined to confirm his leading status as a new genre filmmaker to take seriously.

Upgrade is only his second directorial effort, after Insidious: Chapter 3 which if memory serves me correctly was actually quite a decent addition to that franchise (especially after the underwhelming second movie), but he is already an unstoppable force behind the camera, proving himself to not only be a stylish and unique filmmaker, but also one that gives the audience exactly what they want to see and delivering in ways that haven’t been this satisfying since the likes of Dredd or even Paul Verhoeven’s Robocop. Whannell has made one hell of an experience with this film, and it’s already shaping up to be one of the year’s most memorable films in my book.

Set in a near-future where technology has all but entirely taken over every aspect of people’s lives, from automated driver-less cars to drones hovering in the sky capturing CCTV footage, a mechanic named Grey (Logan Marshall-Green) prefers to do things with his hands than have machines do the work for him. He lives an idyllic existence with his wife Asha (Melanie Vallejo), but everything changes when a group of thugs show up and kill Asha before paralysing Grey, who is helpless as he watches his wife die in front of him. Months go by and Grey, now a wheelchair-bound quadriplegic, is severely depressed and frustrated by the fact that the thugs are no closer to being caught, despite police detective Cortez (Betty Gabriel) doing her best to try and identify them. Grey is soon approached by Eron Keen (Harrison Gilbertson), an eccentric and reclusive tech genius who has developed an artificially-intelligent chip called STEM that can serve as an auxiliary brain, and convinces Grey to have STEM surgically implanted into his spine, which very quickly has Grey regain control of his limbs, and prompts him on a personal quest to find and exact justice on the attackers – but things become much more interesting and violent when STEM (voiced by Simon Maiden) begins talking to him and taking control of his body in certain physical situations.

It’s a plot that’s right out of something like Black Mirror or a lost Philip K. Dick story, but what it has to say about our over-reliance on technology and the things that can come from that for better or for worse, and there is a fair amount of commentary on all of that, it pretty much fades into the background because you’re having such a good time watching this plot unfold, following these characters, and getting sucked into how Whannell chooses to shoot certain scenes whether they’re action-heavy or not. He does a lot of cool things with the camera, like how it captures the lead at all angles as he is going up against some rather chilling villains, and how it seems stuck to him when he’s walking to give off a very robotic feel to his newfound movements; it makes the scene even cooler to watch than it already is, because you can tell that this guy is an incredibly talented filmmaker who is clearly fascinated by this believably futuristic world and wants to show it off in the best ways possible. He’s also got a great lead actor playing this very physical role who excels in every capacity; Logan Marshall-Green really brings a lot of humanity to this guy, making him a believable person who has reactions to the things he can now do with the help of STEM that feel like how anyone would realistically react in the situation, but he also does a lot of carefully conducted body movements that, again, feel very robotic and unnatural as he’s doing the most mundane of things like pouring himself a drink or just walking up some stairs. It’s an incredibly visceral performance that must have been extraordinarily difficult to pull off, and I applaud this guy for going the extra mile to really shine in places that another less-talented actor probably would have not even considered going.

The whole thing is just one great slice of pulpy science-fiction, with an intriguing plot that contains lots of unexpected twists and turns, an excellent lead performance that’s incredibly emotional as well as highly physical, and a very talented filmmaker in charge who really brings a lot of style, intelligence, and even a dark sense of humour to a very gritty but believable universe this all takes place in. This also being partly a body horror, there’s a certain level of violence that alternates from crowd-pleasing gruesomeness (there’s a gory death scene that caused the whole audience I was watching this with to spontaneously applaud immediately afterward, and it’s kind of warranted because it is pretty amazing) to scarily intense, but never to a point where it’s unpleasant to watch; it’s not like Saw or anything, but there is a strong level of violence that the more squeamish audience members may want to be aware of.

But that shouldn’t stop you from checking out Upgrade, because this is such a great movie on so many levels; as a sci-fi flick, it’s smart and has a strong social commentary on the rapid development of technology in our lives; as an action movie, it’s incredibly well shot and choreographed; as a horror movie, it has moments of great intensity and suspense; and as a movie that should make Leigh Whannell a force to be reckoned with, it’s second to none.

Upgrade is an incredibly entertaining and thrilling movie that perfectly blends body-horror with sci-fi themes and visceral action scenes, all shot extremely well by Leigh Whannell and performed exceptionally by a very physical Logan Marshall-Green, who make this a sci-fi horror movie that’s completely unmissable if you love this sort of movie.