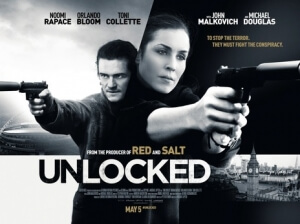 BASICALLY…: A CIA interrogator (Rapace) is lured into a trap that puts the city of London at risk of a biological attack, unless she stops those responsible…

So, that’s not one but TWO trashy thrillers seen within a week – that’s got to be a new record for this website, because between Sleepless and now Unlocked, there seems to be a real thirst right now for dumb, throwaway crime thrillers that happen to feature quite a good cast and crew working on it, in this case veteran director Michael Apted – whose previous credits include Coal Miner’s Daughter, Gorillas in the Mist and, more appropriately, The World Is Not Enough – and A-list actors like Michael Douglas, John Malkovich and Noomi Rapace.

However, as was largely the case with Sleepless, not even that amount of talent can save what is essentially a by-the-numbers, increasingly nonsensical reject of a Spooks episode plotline, and is all the more disposable for it.

The plot, which is surprisingly pretty complicated for a dumb thriller like this, sees Rapace’s former CIA interrogator Alice being brought in to question a suspected terrorist accomplice, only to find that she has been caught in a trap that involves a group of compromised agents that now want to kill her and implement a biological attack on an unknown location in London. That may not sound like it’s hard to follow, but trust me: with all the twists and turns the film begins to make from every conceivable corner, it begins to pile up on one another so much that it renders the plot confusing to a point where you have absolutely no idea what’s going on. By the time the film gets to its third act, I was having a difficult time trying to figure out exactly what the hell was even going on; all I could gather was that there was a bunch of espionage rubbish seen in countless other films like this, right down to the timer-rigged bomb, and all these high-end actors spewing expositional bollocks like they’re actually trying to make it sound legitimate, but are failing miserably.

From beginning to end, this movie makes zero sense. Never mind the fact that some of the twists this movie throws at you are pretty damn predictable – especially when you see who’s playing the person involved – but characters make decisions that in any other realm of reality would immediately be their undoing. At one point, Rapace decides to let the man who was robbing her own safe house tag along with her on the journey, without knowing who exactly he really is, only because he saved her that one time (or maybe because he’s Orlando Bloom, who by the way is being falsely advertised as a main lead when he’s just a minor character at best). Why on earth would a CIA operative, let alone one that’s currently a fugitive, decide to out of nowhere trust a guy who’s already proven to be a little bit dodgy, especially when the first time she meets him HE’S IN THE MIDDLE OF STEALING HER TELEVISION?! And as the film goes on, their sudden partnership and her allowing him to tag along makes her look even more stupid, and if it had ended the way it could have done then that would have been entirely on her. As for the main evil plot to unleash a biological weapon upon the world, as well as who’s really behind it all and for what purpose, it’s just as brain-dead as anything else in this movie, with the script desperately trying so hard to come up with a logical reasoning behind it but it makes everything, including the actors forced to deliver these lines, look even dumber as they continue. It’s honestly kind of frustrating how little this movie makes sense, especially when you know they’ve roped in this many good actors and a strong director to make it, because all of them – aside from the ones who are obviously there for an easy paycheck; hello John Malkovich, playing the CIA director who does hardly anything except watch the action from the comfort of his office – are above this kind of stupid trash that wouldn’t even pass as the plotline on one of the many procedural shows dominating our television channels lately.

I guess if you’re just eager for something mindless to put on in the background, then it would probably be best if you waited for it to appear on Netflix, Amazon, or whichever streaming service this ends up on; but don’t waste your money on this if you want something fun, straightforward or even that interesting, because Unlocked is just too dumb to be any of those things.

Unlocked boggles the mind with how dumb and nonsensical it can get, from a ridiculously complicated plot to things that hardly make any sense whatsoever, and wastes a talented cast and director in a trashy thriller that is frankly beneath a lot of them, at least in the intelligence department.