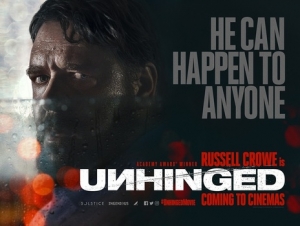 BASICALLY…: After a road rage incident, a single mother (Pistorius) finds herself tormented by the man (Crowe) she antagonised…

It’s a bit of an understatement, but the last few months have been tough for all of us. We desperately need escapism more than ever, but even that is in short supply nowadays as cinemas have, until recently, been shuttered to prevent the COVID-19 spread any further. It’s times like these where you just want to sit back, relax, and watch a crazed, infuriated Russell Crowe make somebody’s life a living hell.

If that’s exactly what you’re looking for, then boy, do I have the perfect film for you.

Unhinged, sold as both a starring vehicle for the Oscar-winning actor, and as the first major cinema release in the UK since they were allowed to re-open, is undeniable trash, the kind that you would put on just as background fodder after a particularly long day at work, and in a normal world would most likely be forgotten amongst the vast waves of summer movie blockbusters. However, this is the kind of trashy B-movie that hits enough of the right spots for me, and just made me feel so happy that I was seeing it in a cinema where something like this is meant to be seen.

The film is quick to show Crowe – credited as simply “Man” – living up to the titular description, as he forcibly enters a home, kills the occupants with a hammer, and then sets the place on fire – all before the opening credits. Our focus then shifts to Rachel (Caren Pistorius), a newly-divorced mother who’s not having a particularly good day; she’s in the midst of an ugly divorce, she and her son Kyle (Gabriel Bateman) are crashing at her brother’s house, she’s just lost her biggest client over the phone, and to top it all off the car right in front of her isn’t moving at the green light, even when she honks her horn at him. Unfortunately for her, that car is Crowe’s, and he decides there and then to make her life a living hell, in an increasingly homicidal case of road rage that involves car chases, phone theft, and the occasional bloody murder.

It’s one of those films that works best when you don’t think too hard about it; there are a number of conveniences and plot holes which, when looked into more closely, really don’t add up and exist only to further the plot, but that isn’t the overall point of this film. Its main goal is to be a wild but fun thrill-ride that’s very easy to describe and gives the audience plenty of high-octane moments to get invested in, and from a pure entertainment angle Unhinged works unbelievably well. It’s not an especially intelligent film, nor is it particularly deep about what it has to say about the increasingly destructive mindset of the average American citizen (which it hints at during the quick-cut opening credits sequence), but it doesn’t feel the need to be sophisticated in the slightest; this is the very definition of a popcorn movie, one where you can go to and have a good time provided you either know what you’re getting into or don’t pay too much attention to its obvious flaws.

It comes from director Derrick Borte, whose most notable credit prior to this was the David Duchovny comedy-drama The Joneses, and writer Carl Ellsworth, who had previously written films like Disturbia and Wes Craven’s Red Eye, and Unhinged feels like the natural result of that unlikely creative collaboration; it has about the same level of high-concept ambition as something like Disturbia, but also a similar amount of self-awareness which doesn’t go too far over the top yet doesn’t go too serious either. Scenes where Crowe is simply staring daggers at people from the confinement of his own vehicle, or brutally assaulting many other people to the point of actual death, are staged with such intense ferocity and nasty, almost exploitative, detail that you have to admire the balls on these guys to go that extra further to display such unpleasant violence in today’s much more sensitive society.

It really goes without saying, but Russell Crowe is easily the best part of this movie; this role is to him what Death Proof’s Stuntman Mike was to Kurt Russell, and the actor is clearly having the time of his life being deliciously evil and sinister for a change, all with that Crowe intensity which, love him or hate him, has done wonders for his career. His crazed performance certainly feels over-the-top in a lot of aspects, but the actor makes it feel enjoyably so, even when he’s shown doing some pretty horrendous things to a lot of unsuspecting people. Obviously, the part isn’t as well-written or even as well-acted as Michael Douglas in Falling Down, but again the point of the film, and by extension this lead performance, isn’t to be smart or clever; it’s to give the audience something to lose themselves in, and someone to easily root against as poor Caren Pistorius suffers his wrath on far too many occasions, and the movie, for all of its misgivings, does give them exactly what they’re hoping for.

Is it high art? Absolutely not, but that doesn’t mean Unhinged is not worth checking out in any way shape or form; if you want a theatrical cinema release that makes you feel like you’re having as much fun as Crowe and the rest of the cast and crew clearly are, then Unhinged is the guilty pleasure you not only want right now, but need right now. For the whole ninety minutes this was playing for, I forgot all about the pandemic and just found myself enjoying this trashy but highly entertaining thriller on the big screen, just like the old days; if only all movies released around now could give off the same effect.

Unhinged is an undeniably trashy but highly entertaining thriller that sees Russell Crowe revel in playing an evil, over-the-top villain in something that works best when you don’t think too hard about its numerous, and obvious, flaws.

Want to decide what the movie’s like for yourself?
Check out Unhinged showtimes in London
via