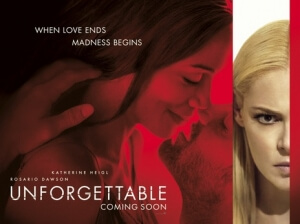 There’s many things that can be said about Unforgettable, the latest in a recent craze of trashy stalker thrillers seemingly transcended from its probably origins on Lifetime, but the casting for it is not an issue at all.

This might honestly be the best possible use of Katherine Heigl in a movie for a long while, playing someone with a seriously psychologically-damaged view of the world, and a sadistic penchant for making people’s lives much worse only because she doesn’t approve of it… which, when you think about it, kind of makes this the perfect role for someone like Heigl. Plus, it’s a hell of a lot more dignified than the slew of rom-coms she starred in despite vowing never to stoop to such a level in the past (oh, how times have changed for her since the days of Grey’s Anatomy and Knocked Up); hopefully this will kick off a new point in her career, where she’s the go-to actress to play seriously psychotic women, because say what you will about this movie, but you will never find a better use of Heigl than here.

In Unforgettable, she plays Tessa, the ex-wife of a guy named David (Geoff Stults) whose new girlfriend Julia (Rosario Dawson) has just moved from San Francisco to live with. At first, Tessa struggles to accept Julia into her life, especially as she sees her daughter Lily (Isabella Rice) begin to warm slowly towards Julia, but when she learns that David and Julia are planning on getting married, she becomes full nutcase and vows to destroy Julia’s life no matter what it takes.

The film is very much a case of “what you see is what you get”, in that the kind of movie it’s being sold as is exactly what this film actually is; a trashy psychological thriller that just happens to be slightly better-made than other recent ones like The Perfect Guy or When The Bough Breaks. If it weren’t for the involvement of actresses like Heigl and Rosario Dawson, or even powerhouse producer Denise Di Novi who here makes her directorial debut, this would have easily ended up on the Lifetime channel where the majority of trashy female-friendly thrillers belong; like a lot of them, it’s over-the-top and campy, sometimes laughably so, but you can at least tell this one has an actual budget behind it, and people who weren’t exactly hacks and could make a decent-looking film out of almost nothing. There’s clearly an audience for this sort of film, as the previous box office successes of No Good Deed, The Perfect Guy et al have demonstrated, so if you happen to be part of that audience then you will lap up Unforgettable like milk in a saucer.

It’s technically not a good movie, as again it’s this kind of film that’s been done many times before, and better, and it hits every predictable note you can imagine, from the heavy foreshadowing to the sly manipulation of villainous characters, but it’s made all the more entertaining by the performances given by these actors who, again, are just going so far over the top they’re practically in no (wo)man’s land. As before, Heigl’s cold and calculated delivery and performance that’s channelling Faye Dunaway in Mommie Dearest needs to be seen to be believed, and Rosario Dawson also makes the most out of what she’s gotten herself into, delivering a surprisingly strong performance that is undeserving of a film like this. Young Isabella Rice, only 10 years old, also leaves a mighty impact as this young girl at the very centre of this whole conflict, and I don’t know what kind of direction this girl was given but it really brings out the vulnerability and frightened qualities of this character; she’s one to look out for, even if this isn’t technically the best film to break out of as an actor (but then again, neither was her previous screen credit for Jem and the Holograms).

You should fully know going in to Unforgettable what kind of movie you’re in store for, and if you like this kind of trashy psychological thriller then you’ll feel right at home, as will people looking for things to complain about. For me, however, it was worth it for creepy-as-hell Katherine Heigl in perhaps the most ingenious bit of casting in her career; if ever they do a remake of Mommie Dearest, we now know exactly who would take on the Faye Dunaway part.

Unforgettable is a trashy psychological thriller that gives you exactly what you go in to see, but the gleefully cold and campy turn by Katherine Heigl in perhaps some of the most inspired casting of her career is easily the highlight of this otherwise completely disposable movie, which should be enjoyed by lovers of trashy cinema everywhere.